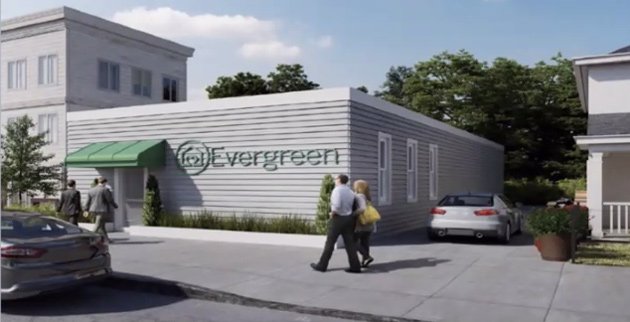 Over nearly five hours today, the Boston Cannabis Board heard from companies seeking to open nine pot shops across the city, from Rte. 1A in East Boston to Brookline Avenue across from Fenway Park to Washington Street in Roslindale, but none proved more contentious than a proposal from a company with 38 dispensaries in the US for a shop on Hyde Park Avenue in Hyde Park - about a half block away from where three local residents have proposed a pot shop of their own, well within the half-mile limit the city says it has for minimum separation between pot shops.

The board took no action on the proposals, which have been circulating since 2018, or the ones in other parts of the city, today, saying it would wait to vote until a meeting next week. Even with the board's approval, proposals would still need to win approval from the state Cannabis Control Commission.

Sean Berte, Armani White and Jillian Domenici, the proposed operators of Evergreen Farms at 883 Hyde Park Ave., the original home of the Serino's pasta factory, were first on the agenda. The three owners are local: Berte and Domenici live in Roslindale - where Berte's family has lived for more than 100 years - while White lives in Roxbury.

Berte and White also qualify as "equity applicants," or members of groups that were particularly harmed by the war on drugs, which should earn them extra points under city and state policies aimed at helping such people. In 2010, Berte, at the time a Boston firefighter, was convicted of possession of some 100 marijuana plants, while White is both black and somebody who was also convicted on a marijuana charge - possession in 2012. Both also report current income of just 50% of the area median income - official policy is to encourage applicants who are seeking to use marijuana entrepreneurship to improve their financial standing.

At their hearing today, they won the support of several Hyde Park residents, including James Kirker, president of the Hyde Park Neighborhood Association. "Quite simply, they are the only truly local applicant," and so they know the neighborhood and would be better able to hire local residents for the roughly 20 positions they expect to have available within two years of opening, he said.

The one resident who opposed the proposal was Phyllis Carlson, who does social-work sessions in her house next door. Carlson said she is concerned about the potential for increased traffic and parking issues outside her house if the shop is approved - and said the location, near the intersection with Metropolitan Avenue, where Hyde Park Avenue southbound goes from two lanes to one, is already dangerous.

Suns Mass, Inc., which wants to take over the much larger building Serino's moved into, at 931 Hyde Park Ave., is a subsidiary of the Harvest Group of Tempe, AZ, but does claim one local connection - it has hired Larry Mayes of Hyde Park, currently an executive at Catholic Charities and previously a member of Mayor Tom Menino's cabinet, to serve as its local director of diversity and equity.

The company's local attorney, Mike Ross, said it would use the 22,000-square-foot former Serino's building for both a store and a facility for creating edibles and other pot-based products. In addition, he said the company would set aside 3,000 square feet as a meeting room available to local groups.

Hyde Park residents who testified, however, were aghast at the idea of an out-of-state marijuana conglomerate moving in when there's a local alternative in Evergreen. " I don't think Hyde Park needs this in the neighborhood," Kirker said.

The proposal did have supporters, but from places such as Brockton and Dorchester. Emmett Folgert, executive director of the Dorchester Youth Collaborative, said he has worked with Mayes on various projects for more than 20 years, called him an "extraordinary leader" and said Mayes's involvement was good enough to warrant his support. One Roslindale resident also supported the proposal. A Cambridge resident said a large company would be able to provide more jobs than a small local concern.

Kirker and other opponents, including Shanel Lindsay, who helped lead the fight to legalize marijuana in 2016, kept trying to raise Harvest's issues in other states, including Pennsylvania and Ohio, but board Chairwoman Kathleen Joyce said a hearing in the middle of a long series of hearings over Zoom was not the place to bring that up and said that opponents should instead submit links or documents that the board could peruse with more time.

Joyce similarly rebuffed an attempt by Ross to answer the charges, saying he, too, could submit written information. "They have a good reputation in this country, not a bad one," he did manage to squeeze in.

I went to one the Hyde Park community feedback meetings organized by the Mayor's office last year because I wanted to personally see the Evergreen Farms presentation as made to local residents.

A few people representing the out of town money / project had planted themselves in the audience and one in particular went out of his way in the Q&A session to disparage the Evergreen Farm team -- he actually stood up with drippingly fake concern to address the local audience to say stuff along the lines of ".. I feel bad bringing this up but I think the community should be aware of your criminal background". It was obvious to the whole room that this was an attack on a competitor and not an honest community member asking questions.

All of the questions from actual local residents revolved around parking concerns (99% of the questions). The remaining 1% of the questions were people who were not really familiar with the reg and security requirements or the high cost and taxes -- the person who asked "what will stop people from buying inside and dealing on the street ..." quickly learned that the cost/tax structure make that sort of dealing non-viable and the other people who asked about "what is to stop our kids from buying" were sorted on all of the various ID checking and other procedures used by the store

The final insult was at the end of the meeting when I was helping clean up and hold the big exterior doors for people leaving -- the ahole from the audience got on his cell phone in the atrium and was loudly talking to his remote investors that "... these people are a joke, we are gonna crush them ..."

He was literally laughing at the local proposal and the local team and telling his remote people that they could easily crush them. That REALLY pissed me off.

the locals will get bought out at somepoint