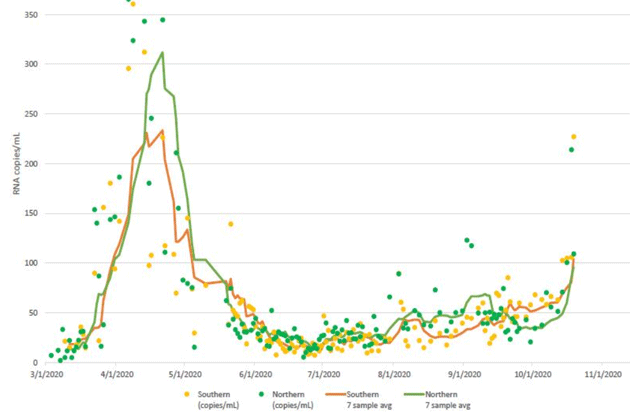 Thrice-weekly samples taken at the MWRA's Deer Island sewage-treatment plant are showing a spike in Covid-19 RNA, which follows increases in Covid-19 rates in Massachusetts and Boston and could signal further increases as the people excreting the RNA spread their virus to people they come into contact with.

The samples are taken from sewage generated by people who live in the 43 Boston-area communities that the MWRA serves.

Earlier today, Boston ended in-school education at public schools due to a rising Covid-19 rate in the city.

Where are you going, dear?
To make a contribution to a scientific study of public health. Be back in an hour.

What A Shitty Survey

Thank you. You are all beautiful people. Tip your waitstaff (Because they are going away until January).

See those last two dots on the far right? If those turn into a 7-day trend, we're heading back to April/May infection rates. Damn.

Hopefully not that bad

the data points on the far right doom us all to this blasted hellscape 2020.

The only thing worse than 2020

I think this winter is going to be very grim for many people. And probably will be the worst yet to come.

We are looking at upward and downward swings on a shaper basis per what some area hospitals are saying. Not as high as the spring but not good either.

Yes, the last two dots on the

Yes, the last two dots on the graph are most intriguing. The number of cases have been trending up in the state, but nowhere to that extent. What gives?

The MWRA data tends to be a leading indicator, so I'd expect to see a sharp uptick in reported cases in about a week.

Wow! So much good data.

Thanks for the link.

Based on the articles linked

Based on the articles linked to from the MWRA data page, the poop detection spikes first.

Doesn't tell you where the problems are, but that we do have a problem.

Intermission is over. The lights are flashing. The third act has started and there are bodies all over the stage.

Stay home if you can.

So... if we all installed

So... if we all installed those 15-gallon-per-flush toilets like POTUS wants us to, that would dilute the concentration in the test result... ergo* there is less disease than the evil media says there is.
It all fits!
-
(* possibly more accurately "ogre", because we're in the bizarro-world of backwards-logic)

So to be clear... they use the bathroom more inside, rather than in parks, thus inflating the COVID numbers? Or they are spending more time inside spreading the virus?

If you look at the cases by date reported, like I do, you see the same danger signs (state, not city; city isn't doing terribly yet). Cases by date went from almost zero to 600 in just two days, a rate not seen since .. forever? Tomorrow will tell more b/c 3x is a trend.

Explanation. Today, let's say there were 50,000 tests performed. Only one or two results came back from the labs, so the positive number was probably just a couple. Tomorrow, another 10,000 results come back from the labs. Say a couple hundred are positive. Two days from now, another couple thousand, etc., so that within 7 days or so (currently), all the results have come in, most between 2 and 5 days after testing (The result of how quickly labs test the specimens.)

On 10/19 (Monday) zero positives were recorded.

The speed of increase in cases suggests there will be higher and higher numbers of positives. Depending on what happens tomorrow.

Serious question: we get our water from the same place as everyone else but we have BWSC not MWRA, is that accurate?

Boston gets water from MWRA

There's a table here, although I don't have a cite for a primary source: https://en.wikipedia.org/wiki/Massachusetts_Water_Resources_Authority#Se...

MWRA supplies water to the BWSC, which then sends it to your tap. Sewage is similar, but in reverse, and it ends up at Deer Island, not out in western Mass.

I just checked with the Trump campaign.

The virus is fake so therefore this shit is unreal.

This Dot rat has contributed many turds to the cause.