Boston Police report arresting eight people - and issuing summons to two more - for last night's attempt to cover at least one side of the Citgo sign with a climate-change banner.

That included a response by the Boston Fire Department.

Take that eyesore down

Boston's devotion to that advertisement is idiotic. It's an ad for a company which has few Boston locations, is owned by a dictatorship, and produces a product which has and continues to cause extreme political and environmental problems.

Yet Boston being Boston, anything older than 10 years is suddenly sacrament and Must Never Be Removed.

Take the fucker down and put anything else in its place. I'd prefer art but if it needs to be an advertisement, at least make it for an ethical business that has a Boston presence.

One problem I have with the recent decision

to declare the Citgo sign a 'landmark' is this: Because the components of the sign have been significantly modified, updated, etc. over the years, the sign itself has lost any importance or relevance from a historical or 'industrial archeology' perspective, which is the usual benchmark for giving something a landmark designation. It's become just another advertising sign.

I always liked the idea of it

I always liked the idea of it being turned over to BU or the city or even the Red Sox and changing the image to be a giant B or a pair of red Sox etc.

I like the sign because in my memory, it has always been there. But keeping the sign is certainly not a hill I'm willing to die on.

My fond memories of the Citgo sign are seeing it in clips on the evening news, especially in '67, when Sox players homered over the wall. Few games were televised back then. I always associated it with the Red Sox. It has no such significance for most people around today, so if it goes, that's fine, it's not a big deal.

Did Fenway have some control over the old neon sign so that when there was a home run it lit up as "C it go"?

That's my memory association with it.

I always thought the White

I always thought the White Fuel sign was cooler anyway.

Two reasons people are attached to it

I think you've hit it. Every

I think you've hit it. Every "square" in Boston needs a big tall landmark so we can find our way from neighborhood to neighborhood.

Any big lit-up sign is going to be a navigational beacon. (Is that actually needed? Are you a sea captain?) And unless you're in a plane or high-rise building it can't be seen for miles.

If people want to associate with Fenway, why not put a Red Sox logo on the sign instead? Are you incapable of changing the mental association between the Citgo logo to literally anything else?

When I came to Boston the sign was dingy neon tubes, at least 1/2 which didn't work. So any "association" I had with the sign was lost when they updated it to plastic LED strips.

Seen from miles away

You can see it from Beacon Hill, from Brookline, from Roxbury, from MIT, from Mount Auburn Cemetery in Watertown ... and lots of other places.

Only the highest hill or on the banks of the Charles

On the street, not so much. It's just not that high up.

Are people in Boston so incapable of reading street signs they wonder around looking into the distance in hopes of getting their bearings like some revolutionary scout lost in the forest?

And would they still be lost if instead of the Citgo Logo it was a Red Sox logo or just the illuminated phrase "Kenmore Square" with an arrow pointing straight down?

A. We don't have street signs.
B. Do you mean wander?

And we LOVED it when it was

And we LOVED it when it was dingy neon...

I totally see where you’re coming from, but I think a lot of people like the sign because they see it as public art and visually appealing in a city devoid of art/billboards/signage (which is a form of art). the retro look, the unique neon, and yes it’s connection to the sporting world and as a known/recognizable landmark make it hip in a very bland city. I’m sure this take is controversial, but I think many find it aesthetically pleasing. I don’t think Maduro or the petrol cartels get any benefit from it.

No question it's art

It's just not good art.

And art can be replaced with different art.

Yet Boston being Boston,

Yet Boston being Boston, anything older than 10 years is suddenly sacrament and Must Never Be Removed.

Like names (Yawkey Way, Dudley Square), statues (Lincoln, Columbus, the... ummm... that memorial of the guys on horseback that got moved to D Street in the Seaport...), elevated highways, and streetcar tracks?

No. Boston treats landmarks, etc... the same it does its sports heroes.
There's a few immortals that won't be touched - Bird, Yaz, Williams, Brady, Orr, etc...
There's beloved local figures who put their time in, not immortals but loyal and first class - Dwight Evans is a good example
There's indelibly associated figures with some great value and some great headaches, overstayed their time, and somewhat tough to get rid of - Manny Ramirez. Brutalist City Hall.
Then there's a lot of the rest. Maybe loved or at least useful for a while, but Boston sours on them. "What have you done for me lately?" and sad if not bitter endings. Uses them, grinds them up, spits them out. Nomar

Citgo was found guilty of environmental crimes and the Government that owns Citgo Venezuela has a long history of racism and mistreatment of its poor and minorities citizens. It is time to topple the Citgo sign.

Magoo might raise an American flag over citgo and shout out from the ramparts: “We're fighting for our right to live, to exist. And should we win the day, the 4th of July will no longer be known as an American holiday, but as the day when the world declared in one voice: "We will not go quietly into the night! We will not vanish without a fight!” And the crowd roars! Magoo.

God, you can't even hijack a quote and get it right.

Trespassing, perhaps, but whose peace was disturbed?

That of the salaried cops

Who had to respond to this instead of doing nothing for the same pay. Referred to by Swirly as "contempt of cop."

time for that monstrosity to go.

As old school as me?

Do you remember the old green-and-white "cities service" sign on that location, before Cities Service changed their name to Citgo? 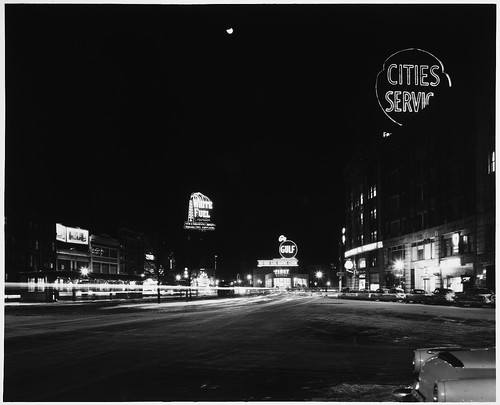 Bring it all back!

White Fuel sign is way cooler! And then reopen Narcissus!

Did they used to call it

Did they used to call it Gasoline Alley @Bob Leponge?

I don’t remember it being called gasoline alley. I was a little kid when the big red triangle corgi sign replaced the old green one and when the overpass went in.

Autocorrect has gone to the dogs. But I am pretty sure that if someone started selling “corgi” branded gasoline with a smiling dog’s head logo, I’d buy nothing else.

I thought I typed “Citgo”

Cool colors & pattern
Very unique in the region
It's in the background of a lot of pictures & views from the Esplanade, Cambridge, etc, plus Fenway, so it's a common reference and landmark.
It's a relic of it's time, or whatnot.

I have no love for Citgo, or Venezuela. But I like the sign and it's place in the city.

I think the appeal of the sign and it’s recognizability is from the multi shaded triangle. Keeping that and replacing or removing the word, “Citgo” would be a good compromise. Of course there are probably trademark issues.