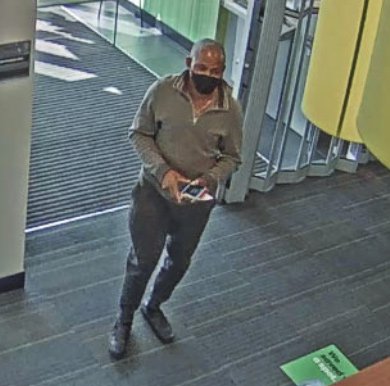 Osemwegie at Roslindale TD Bank branch about to wire some money he didn't know came from the feds. From the affidavit.

Augustine Osemwegie, a Nigerian native living in Milton, set up an elaborate system involving used cars and multiple bank accounts to launder money for a network of Nigerians along the East Coast who, federal officials say, defrauded seniors looking for company on Facebook and using other people's personal information to suck money out of state pandemic unemployment accounts and federal payments meant for hard-hit businesses, the US Attorney's office charges.

Osemwegie, 53, was formally charged yesterday in US District Court with conspiracy to commit bank and wire fraud. He faces a bail hearing on Aug. 31.

According to an affidavit by an FBI agent on the case, Osemwegie and a co-conspirator - who pleaded guilty last summer and agreed to turn state's evidence - would take payments from scam runners for a fee and would ensure their money could be safely transferred to Nigeria and converted into naira, that country's currency.

Osemwegie, who did not participate directly in any of the scams himself, would do this in part by using the money from the people committing the frauds to buy used cars in Massachusetts and elsewhere in the US, and ship those to Nigeria, where they would be sold in local currency, with the proceeds, minus Osemwegie's fee, deposited in the scammers' Nigerian accounts. He set up a used-car company to facilitate the purchases and sales, the FBI says.

Among those who allegedly funneled him money was Macpherson Osemwegie of Hyde Park - no relation - who was indicted in March on charges he and his pals would patiently string along lonely women between their 50s and 80s on Facebook - sometimes for several years, pretending to be US Army officers overseas, before finally asking the women for money. Macpherson Osemwegie has agreed to plead guilty and is scheduled to appear before a federal judge in Boston on Wednesday.

The affidavit says that after the co-conspirator agreed to cooperate with the feds, he called Osemwegie to introduce him to a third man, also working for the feds, who pretended he wanted to move money to Nigeria. Oswemwegie, wary at first because he knew of the co-conspirator's legal issues, said he could do so for a 40% fee. The third man countered with 10%. At a meeting at the Peabody Five Guys, they agreed on 20%, the affidavit says.

The third man then handed Oswemwegie an envelope with $13,000 in cash, which Osemwegie said he would convert to Bitcoin, to help evade suspicious Nigerian officials.

But later that day, the affidavit says, Oswemgie contacted the man and said that instead of using Bitcoin, he had wired the money to an account the third man controlled at a Canadian bank. Oh, and he was increasing his cut to 30%.

Neighborhoods:
Milton
Topics:
Crime
Ad:
Like the job UHub is doing? Consider a contribution. Thanks!

In other Milton news

What's old is new again on the Mattapan Line
Former Boston police commissioner hired to help Curry prevent more anti-Semitic, racist scrawlings, threats
Measuring snow in New England
Starting Monday, you're going to want to wear bright orange in much of the Blue Hills, because hunting arrows hurt like the dickens
Variety is the spice of mushrooms
Neponset River from Hyde Park to Dorchester could become federal Superfund site