Man charged as Jan. 6 asshole from Athol; was quickly turned in by townspeople 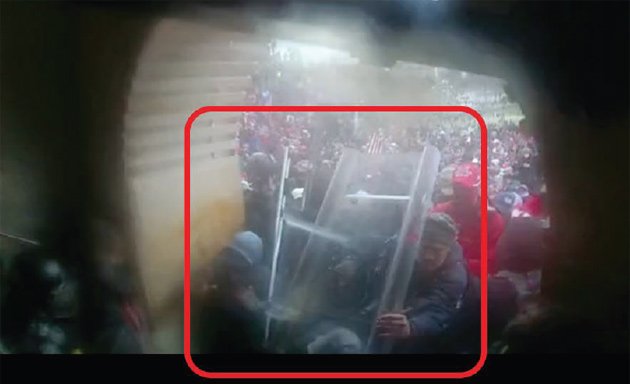 Gillespie using a police shield to batter his way into Capitol, from FBI affidavit.

Update: Released on $10,000 bail, has until Wednesday to get all the guns out of his house. Next court hearing is Thursday.

An Athol man was charged today with using a shield to ram police officers as he screamed "traitor!" and "treason!" at them during the failed coup at the Capitol last Jan. 6, the US Attorney's office reports.

Vincent J. Gillespie, 60, was arrested in Athol. Court records state he was quickly reported to the FBI after six people who recognized him - including a former neighbor and the manager of a hardware store he shopped at recognized him in photos the FBI released.

According to the US Attorney's office in Boston:

From at least 4:11 p.m. to at least 4:25 p.m., Gillespie was among rioters in the Lower West Terrance of the Capitol who engaged in pushing, shoving, yelling, and fighting with law enforcement officers. He struggled his way through the crowd, eventually maneuvering through the rioters to the line of police officers defending the Lower West Terrace’s exterior door. At one point, he gained control of a police shield as he approached the officers. Gillespie used the shield to ram the law enforcement officers, continuing to scream “traitor” and “treason” at the police. He also grabbed a law enforcement officer by the arm and attempted to pull him into the crowd.

Gillespie was to make an appearance in US District Court in Boston on charges of assaulting, resisting, or impeding officers, civil disorder, engaging in physical violence in a restricted building or grounds and other offenses. If his case is handled like that of other failed putschists from Massachusetts, his case will be transferred to federal court in Washington for disposition.

According to an affidavit by an FBI agent on the case, people who knew Gillespie quickly contacted the FBI to turn him in after the bureau posted photos of him wearing a distinctive Berkshire Nautilus hoodie. People who dropped a dime included a former neighbor, somebody who works at AAA who recognized him from visits to an AAA office, the manager of a hardware store Gillespie shops at and three workers for the town of Athol, "where Gillespie resides and frequently attends meetings and pays his tax bills at the Town Hall."

In June of last year, Gillespie took time out from fretting about Joe Biden to complain about a plan to install parking meters in downtown Athol.

One thing that is really nice about Athol is that you don’t have these nasty parking meter men or ladies running around giving everybody tickets if you’re one minute late. It’s really unpleasant.

(Trump’s) emphasis on trying to stop the flood of non-white aliens is important. You can put ‘non-white’ down.” 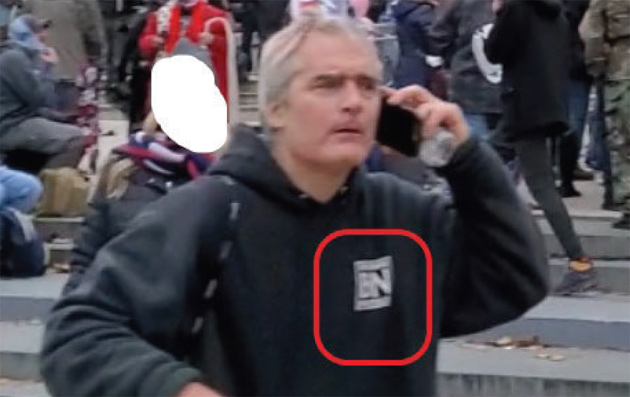 Neighborhoods:
West of 495
Topics:
Crime
Free tagging:
1/6
Athol
Ad:
Like the job UHub is doing? Consider a contribution. Thanks!

Very self-aware of him to have provided a play-by-play of his own activities like that...

Can we get one from Marblehead?

six people who recognized him

People who dropped a dime included a former neighbor, somebody who works at AAA who recognized him from visits to an AAA office, the manager of a hardware store Gillespie shops at and three workers for the town of Athol, "where Gillespie resides and frequently attends meetings and pays his tax bills at the Town Hall."

I'm gonna guess that they're all tired of his bullshit.

If you're fixin' to commit a treason

It's probably not a great idea to have a long list of people who will gladly identify you to the feds.

Maybe he thought he'd have a

Maybe he thought he'd have a cushy job being part of the new Super America II: Fuck Yeah... And Your Feelings!!!

Good for these people. I just

Good for these people. I just hope this description of them doesn't cause random right-wingers to figure out who they are and harass them.

If by the time I've reached the age of 60

I consider this the best use of my time, someone seriously please just smother me with a pillow.

What a sad man. That trip to DC was probably an incredibly rare venture outside of a 10-mile radius of his residence. What "non-white" person did he think was going to come all the way from wherever to Athol, Massachusetts just to threaten him and/or steal from him?

I'm glad I visited my bar last night, and socialized with people who are 15 years my junior, who are smart, ambitious, and kind. Meanwhile, this man 22 years my senior has just concluded what appears to be six decades of crap with a federal sentence.

Throw yourself at the mercy of the court, you old fart sack of crap. Plea out if you're lucky, and then, for your sake (not even for ours), dedicate the rest of your life to learning from and liking people who are going to inherit this world after you depart it. A "non-white" person may well someday live in the home that you now inhabit. I hope they're a better neighbor than you ever were.

George wants to move on up

not move next door to atholes.

(I've been there. Horrible place.)

"...please just smother me with a pillow."

Do you want a MyPillow for that?

For some reason, a magistrate ordered an extremely wild-sounding former doctor named Kang Lu who had been arraigned on a variety of gun and other charges, to be confined with an ankle bracelet at the residence of… Vincent Gillespie, Athol, MA.

I wonder what other treasures the Google Sea will yield?

The unhinged who put peoples'

The unhinged who put peoples' lives in danger don't deserve sympathy. Sympathizers are wasting their energy trying to argue with me.

Not the reason for the moniker Tool Town, but certainly appropriate in this instance.

They are nice ones.

Lived out that way in the 90s; the town sign on 2A at the Orange/Athol line was frequently... altered. It wasn't inaccurate.

Never been there and have no real opinion of the place. However, I will ways remember a WBCN skit where they had someone impersonating Peter Falk doing a story about Athol. Of course it was called "Falk in Athol." (Say it quickly, if you don't get it right away.)

Always said he was named for two Massachusetts places (Endicott is part of Dedham).

Others would say he was named for four Massachusetts places Endicott, Peabody, Athol, and Marblehead.

Dude's support of the Orange Athol's coup attempt was his undoing.

And as we are dumping on Athol

I must mention that it's one of the places thought to be the real Dunwich in Lovecraft's "The Dunwich Horror", written back in the 1930s.

The area had a few charms. There was a bookstore called the Hobbit's Doorway in downtown Athol that I miss a lot from my time out there. (There was indeed a round hobbit door in the cupola of the building.)

The Farm School is a beautiful thing in Athol; my daughter went to summer camp there until she aged out. It's a working farm with summer camps, learning programs and classes for all ages, at least one program for adults runs for at least two years.

This jackhole was probably upset about the number of non-white folks that go to the programs or live & work at that farm, and the fact that the first marijuana dispensary in town is run by a Black man. Don't miss *that* aspect of living out there at all.