No more Macy's at CambridgeSide ex-Galleria 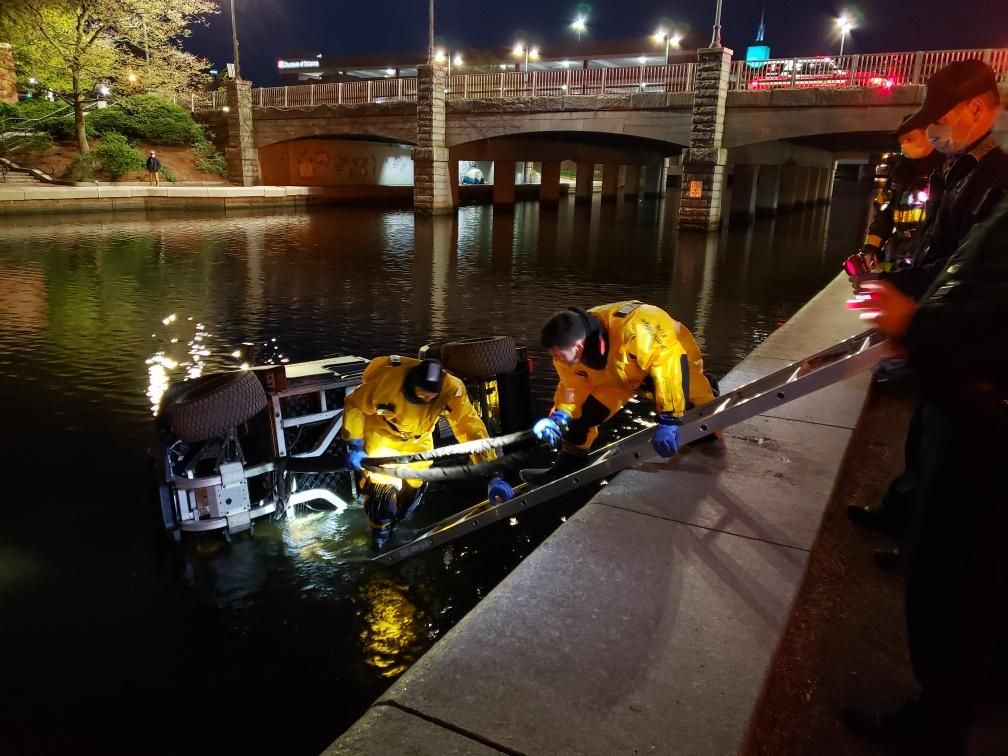 The Cambridge Fire Department reports on an incident behind the CambridgeSide mall last night: Read more.

The CambridgeSide shopping mall has entirely closed "through at least March 29", except for curbside pick-up at both Best Buy and The Cheesecake Factory.

Earlier: Copley Place and all other Simon Malls are closed, too.

Cambridge Police report arresting Wayne MacDonald, 61, who lists a Boston homeless shelter as his address, on charges he exposed a sex toy in his pants to two girls at a CambridgeSide Place clothing store this past Sunday. Read more.

Cambridge Police report they are looking for a guy for an incident at CambridgeSide Place on Sunday evening: Read more.

Police in Cambridge search for man with teeth of steel

One of the more common type of entries in the Cambridge police log is shoplifting at the CambridgeSide mall. But a Wednesday incident was a bit different: Read more. 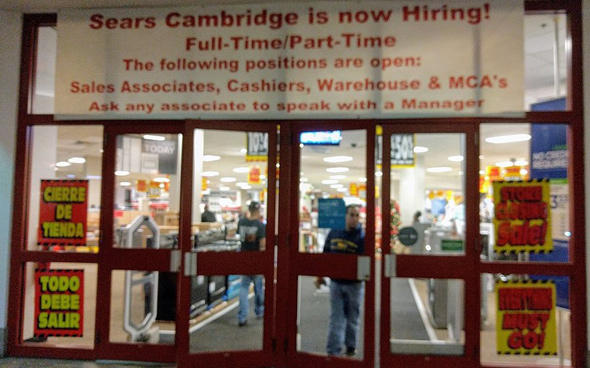 Ron Newman reports store-closing signs are up at the Sears at the Cambridgeside Galleria.

Cambridgeside Galleria shoplifters tried to escape by driving at a cop, police say

Two people face arraignment tomorrow on a charge of assault and battery with a dangerous weapon following an incident this afternoon outside the Cambridgeside Galleria. Read more.

Wicked Local reports police are looking for two men they say tied up an employee of a CambridgeSide Galleria store before making off with several iPhones on June 26 - the same day another man held up the CVS there at gunpoint.

Cambridge Police report they are looking for this guy for sticking up the CVS at the CambridgeSide Galleria on Monday. He made off with an unspecified amount of cash. 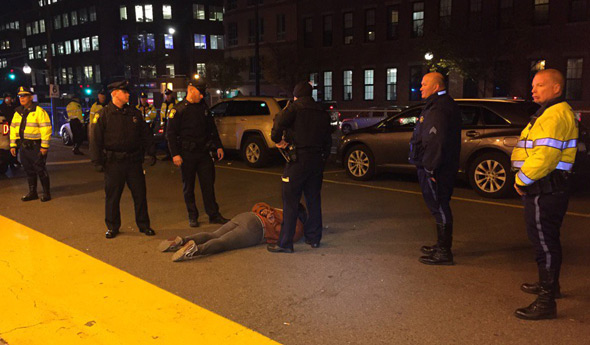 Woman in handcuffs at Lechmere around 7:30. Photo by Andy Metzger.

Something like 1,000 people showed up at the Champs Sports Store around 5:30 p.m. to meet Celtics player Jaylen Brown and rapper Desiigner and something got out of hand. Cambridge, MIT, Boston and State Police all showed up.

Jackie Geilfuss reports she was on an EZ Ride bus that got caught in the crowds and police outside the mall: Read more.

State public-health officials have released the itinerary of a European visitor to the Boston area earlier this month and say anybody who might have been in the same area at the same time as this person might want to check with their health-care provider because that person came down with measles.

Cambridge Police report arresting a male worker at a CambridgeSide Galleria restaurant today on charges he set up a cell phone to record a female co-worker changing her clothes.

Arial Vanegas Cardona, 34, of East Boston is scheduled for arraignment on a charge of unlawful wiretapping.

Police say that yesterday morning, a female worker noticed the setup and called police. Police did not release the name of the restaurant.

A 14-year-old student who was punched, robbed and warned not to snitch by two classmates at the Ruggles stop on the Orange Line around 2 p.m. yesterday thought he'd managed to escape them by making his way to the Cambridgeside Galleria.

But, he told police, the two - and an older guy - were waiting for him when he left the mall around 5:40 p.m. and they jumped him again, stole his cell phone and threatened to "drop him" in class if he told anyone what had happened.

MBTA Transit Police report arresting one of the classmates and the older teen on a Green Line shuttle bus at North Station.

Kitty Genovese at the Cambridgeside Galleria

Wicked Local Cambridge reports police arrested an out-of-state man on charges he beat and kicked his wife in the middle of the mall while bystanders did nothing, save for one woman who finally tried to stop the attack:

Another witness told police Le hit his wife in the head, knocked her to the ground and then dragged her by her arm. When she realized no one in the surrounding area was going to help the woman, the witness confronted Le and asked him to stop, but he allegedly waved her off, saying the victim was his wife.

... It was totally DEAD in there. Totally. Dead. We were in there wandering around for almost an hour before we saw another person in there, and that included some of the staff at a few stores. ...

Lack of gentility at CambridgeSide Galleria

Cambridge Police report a woman summoned police to the cafe in the Borders on Saturday afternoon when:

[S]he was waiting for an order at the food counter and a customer waiting behind her became irate on how long it was taking and began pushing her and yelling at her to hurry up. The male suspect denied the incident.

Sears is a store ahead of its time

AppleFoot reports the Sears at the CambridgeSide Galleria has already put up Christmas trees - with lights and ornaments.

Or maybe they forgot to take down their displays from the '80s - because they are also selling leg warmers.