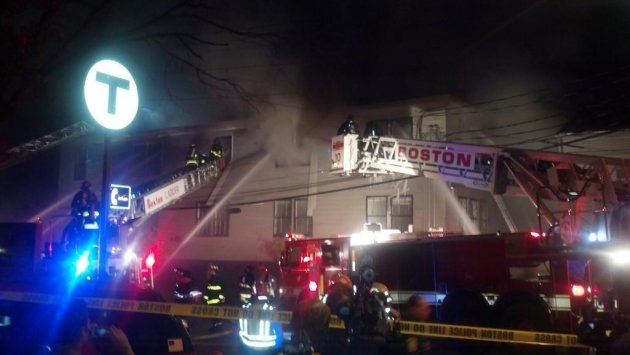 At Lagrange and Centre. Photo by sbBob589. See it larger.

A 5-alarm fire reported around 7:30 p.m. in the former Armstrong Pharmaceuticals complex at Lagrange and Centre streets sent thick smoke into the surrounding streets, where residents had been complaining for weeks about homeless people and teenagers seen going in and out of the buildings.

Firefighters stayed out of the series of connected buildings - which had been marked months ago as off limits in the event of a fire because of a lack of sprinklers and structural issues. The bulk of the fire was reported knocked down around 10:30 p.m., but firefighters remained on scene to watch for hot spots that might flare up.

Local landlord and developer Michael Argiros, who had proposed replacing the factory with apartments in April, bought the property on Aug. 26 for $2.2 million, according to Suffolk County Registry of Deeds records.

Joe Donahue reported from the scene:

Nasty, toxic smell. HazMat also on site. Everyone fearful of a big boom.

The building borders the Needham Line, on which the MBTA suspended train service.

Last month, a resident complained to the city about the factory:

ISD issued a violation on Sept. 4.

Julia C. photographed the worsening smoke around 8:30 p.m., on Lagrange just north of the train bridge, looking towards Centre: Firefighters were in the thick of it (photo by BFD): The smoke filled the neighborhood, as Ed Grzyb shows: Sean took a photo of a responding truck: Thanks! Knew I could come here to find out what the heck was going on with all the firetrucks whizzing by.

Now something will be built

The good thing is that nobody lives or works or was in there (we hope). Here's to the firefighters, with well-wishes for their own safety.

This is a tough building to be fighting a fire at, BFD is doing great.

I'm right down the street, now without power as I think they cut the power to the area to help the firefighting, and hopefully they can get this under control quickly and safely.

I had just gotten off the commuter rail at Highland...

...when I heard tons upon tons of fire engines wailing down West Roxbury Parkway and Centre St, so I figured that's what that was. I can still hear them now.

I'm over on Weld St

and it was quite a racket. Wondered what was going on. Hope everyone stays safe. Let it burn to the ground.

We were stopped at Centre &

We were stopped at Centre & Spring and cars were turning back towards the Shaw's, we couldn't see far enough ahead to know what was going on. The sky was a smoky, burning mist. The photo above captures that well.

Could this have been a source where kids were getting stuff to "huff"? Can it be legal for a company to pull up and moving leaving dangerous chemicals behind unsecured? This is local company Armstrong Pharmaceuticals, now based in Canton.
Article on teen inhalant abuse:
http://abcnews.go.com/GMA/OnCall/teen-inhalant-abuse/story?id=10311374

You can get inhalables anywhere

Even gasolene will do.

Inhalers for asthma don't use stuff that can get you high as a propellant.

That explains a lot.

You're supposed to inhale that stuff...

... that's why they're called inhalers. Inhalant abuse is a totally different thing. For one thing, the inhalant has to be toxic. Now the smoke coming from the building on the other hand... totally toxic.

I hope that if anyone was

I hope that if anyone was staying there, they find a better and safer place to sleep by the time the weather gets really cold again.

Between this and the old factory on the Mattapan Hyde Park Line last week do we have an arsonist on our hands?

Breathing in the neighborhood is brutal.

It burns the back of your throat. I live 3 blocks away and just got home and closed the windows, but the acrid smoke is already inside. A neighbor said to turn the AC on, but that would just pull the smoke in while getting whatever is in the smoke all over my ac filter.

It'll be interesting to find out what caused it. A big engulfing fire like that in a building that is the center of a developer vs the neighborhood battle is very suspicious.

Prayers that no one is hurt.

Not how ac works

Air conditioners don't pull in outside air; they just release heat and moisture to the outside. The air inside your house stays inside, and just gets cycled through a cooling phase in the conditioner, then released back into the room. As far as airflow goes, it's a closed system.

It depends on what kind of unit you have and what settings you use. Mine allows me to vent from the outside during cool air times - an alternative to removing a unit that might still need to be used.

I worked there for a summer 30 years ago

Horrible, horrible place. At the time, they were packaging various over the counter things (Nair, Cruex) into aerosol cans. So there were long assembly lines and large amounts of nasty chemicals. Occupational Safety and Health was never high on the agenda, back when it was actually in business.

Even 30 years ago, the building complex was a falling down fire trap. I'm glad they pulled the BFD out. Anyone getting hurt to save the building would be a crime. Losing this place is addition by subtraction.

is his insurance policy up to date? Seriously, the guy paid $2.2 million then hit a brick wall of NIMBYs. It could very well be that the best use scenario for the building was arson. Not making any accusations, but the building was essentially a complete loss for him due to neighborhood activists. Some, faced with such circumstances, would still find a way to earn a return on the investment.

"Seriously, the guy paid $2.2 million then hit a brick wall of NIMBYs."

Is that the right sequence of events? From Adam's post it looks like he only bought the building in August, months after the NIMBY-dominated presentation in April. Presumably he'd already invested some money in getting the option to buy the place, but it looks like he didn't drop the $2.2 million until afterwards.

have any substantiation for any of this? i live a block away (it's the old armstrong labs bldg i know it well) and if that giant eyesore of a sh!thole were torn down for any reason, there would be much rejoicing. they could build a friggen casino/firing range/strip club entertainment complex and it would be an improvement. i doubt he met many NIMBYs.

He met tons of NIMBYs!

Just in case you missed the link in the original post, here's a report from an April community meeting in which the guy and his architects were lucky to escape alive from an angry, snarling, sharpened-claws mob of neighbors.

Now, granted, they were ready to tear him limb from limb because he wanted to replace the factory with apartments, but one of the highlights was when he basically asked the neighbors if they'd rather the fire trap stay in place than see it replaced with his apartments and the crowd yelled as one: "Yes!"

There were absolutely no

There were absolutely no hazardous chemicals left behind in that building; it was completely empty. The electricity was also shut off, so this had to have been arson.

How do you know what was inside?

Many of these fires are started by kid fooling around or people doing things like trying to burn off the rubber from copper cables so they can get some cash from a scrapyard. Maybe arson, maybe not.

"Had" to have been arson?

Not that I'd be surprised if it turned out to be, but...I grew up in the boonies, and know that it's not at all uncommon for neglected structures to catch fire on their own with no human help - especially after a long dry spell. I've even seen barns catch fire in the winter in the middle of a field covered in snow. Composting organic material and sunlight are all it takes.

In the city, you have a lot of added non-intentional ignition sources - discarded cigarette butts, embers from backyard grills, nh-imported fireworks, 'hobo fires' (yeah not real hobos - guess we should rename these 'hanging-out-teen fires'), etc.

Above, you'd see that people have been complaining for at least a month about a chemical odor in the building.

Either there was a meth lab inside that went awry (and started a fire).... and folks, a former pharma company would be a good spot for a meth lab if the entire lab wasn't gutted (i.e. counters, eye wash, etc etc)..

OR some kids got in there, and start messing with pharma left overs and one combusted.

I really doubt this was arson considering the issues this place has had before.

If I am wrong, be prepared to cite your source because you can't say that unless you have a source .

From Loop Net :
Industrial Property - Off Market
Price:N/ABuilding Size:44,000 SFProperty Type:IndustrialProperty Sub-type:R&DAdditional Sub-types:Flex SpaceManufacturingOffice-R&DProperty Use Type:Vacant/Owner-UserClear Ceiling Height:10 ft.Dock-High Doors/Loading:3Lot Size:0.62 ACListing ID17258259Last Updatedover 1 year ago
Highlights
Two Class 8 clean rooms; one Class 5 clean roomCompressed Air: Distributed throughout the property. Vacuum system in Building 4HVAC: The entire property is air conditioned. Heat is oil via a new (2008) steam boiler.Environmental: 21E in hand. Clean enough for residential use.Parking: Approximately 10 on-site. On-street parking allowed throughout the area. MBTA parking lot directly across the street.Real Estate Taxes: Approximately $52,000 per year
Description
We are pleased to present this landmark pharmaceutical manufacturing building for sale or lease. This property has produced all of the Primatene Mist (epinephrine) sold worldwide since the 1950s. Located directly across the street from the MBTA Commuter Rail's West Roxbury Station, this property is ideal for any kind of lab user looking for a less expensive alternative to the Cambridge/Lexington markets.

Alternatively, the location across the street from the MBTA makes it an ideal candidate for a residential redevelopment.

On LaGrange. Across the street from the MBTA Commuter Rail (West Roxbury Stop).

it abuts the railroad tracks, so vandals r us perhaps. Kind of stupid for the owners to use lightning to burn it down.

Why don't PD have breathing apparatus equip.? They're exposed to all kinds of shit.

Major cities and towns got $$ for safety equip. for FD PD EMS...where did it go? Rob Peter to Pay Paul?

I'm thinking meth lab. Way too many people coming and going, somebody fucked up and shit got real.

As I said above, a former Pharma Lab with the specs that kvn posted above would be perfect for a meth lab.

If it was a big factory for meth, there would be enough chemicals to cause the misty, breath-hard, smoke that appeared. Making meth is VERY toxic and breathing in the chemicals can be very hazardous. One wrong move, and *poof*

I've yet to understand how anyone can even think about manufacturing meth and not get caught because it STINKS when its cooking. (smells heavily like cat urine and/or ammonia)

(no, I don't know this first hand but I read about it)

Cause of last nights 5 alarm fire remains under investigation by BFD Investigation Unit. This status will not change today.

On how many times boston.com is ripping off Adam G in it's "coverage" of this fire?

It's just the Glob's inept stab at