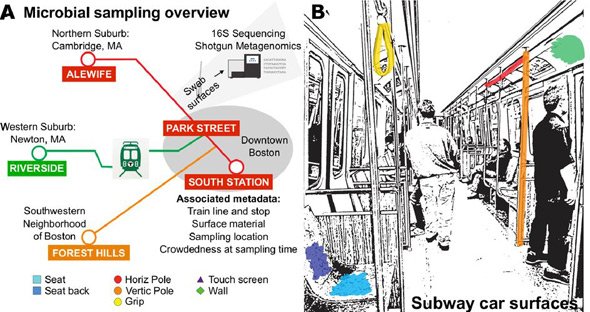 Where samples were collected. Posted under this license.

Scientists who took samples on the MBTA from everything from subway straps to outdoor CharlieCard machines found that the microorganisms they found showed no greater virulence - or greater resistance to antibiotics - than you'd find elsewhere.

In a study released today, the researchers from the Harvard T.H. Chan School of Public Health also said they found no differences based on the particular subway lines they sampled - sorry, D Line riders, stop lording it over Orange Line regulars - but did find differences between, say, vertical poles and seat backs. And indoor CharlieCard machines had different types of bacteria on their touch screens than outdoor ones, they found.

A key finding for those who swab themselves down after a T ride: The researchers found "minimal presence of pathogenic and antibiotic resistance on the Boston transit system."

In fact, after comparing their samples with stool samples taken in the US, China, Malawi and Venezuela, the researchers reported:

Both the air microbiome and Boston subway samples had noticeably lower levels of [such microorganisms] than were seen with typical human stool samples.

In general, the microorganisms found inside train cars matched that typically found on the average person's skin and hair, the study found - adding the researchers found only very low amounts of the organisms typically found in people's digestive tracks and mouths, so maybe that seat really is wet because of a dripping umbrella and not something else - although hanging straps were "enriched" with oral organisms.

All surface types were dominated by skin microbes, with smaller proportions of oral, gut, and environmental taxa across seats and touchscreens.

They described where they took samples from:

Don't get me started. North

Don't get me started. North Station Green Line and Orange Line Platforms have gone down hill over that past 6 months ago. I noticed the guy who used to clean it and did a wonderful job is no longer there. Now the floors are disgusting, there is spittle spots all over the floor, drinks and food all over the waiting benches. The same blood spots are still on the wall next to the lower platform Green Line waiting bench at the far end. I saw one guy carrying some garbage bags in the morning this week, but that was it. People are slobs and they don't even care. Personally, I can't blame the workers for being afraid to go near some of the ?#$% I've seen.

Are you a Trump supporter?

You remind me of those people who enter a discussion about Trump and talk about Hillary Clinton's faults instead. It's like arguing with my 3 year old. "But she did it too!"

The discussion was about germs on the T.

Not your personal soap box about who cleans a station.

You realize, and I'm sure you do,

You don't understand the meaning of irony.

You don't understand the meaning of irony.

On your wedding day.

Next, they should take air samples. That would probably be far more interesting, since nobody ever really gets the flu from a dirty pole. Noro, maybe. Flu, no.

Airborne lead, asbestos, and VOCs off the charts! And that's not even starting on biologicals.

What they are likely to find, as with other subway systems, is high amounts of metals from brake and wheel wear on the platforms, and lots of biologicals on the trains due to poor ventilation and crowding.

I did some sampling back in the 1990s when things were less crowded less of the day, and we did find quite a lot of viral particles around. Our methods couldn't detect if they were dead, alive, or dessicated but viable, but we found plenty then just the same.

If we didn't find much lead or asbestos 15 years ago, there would be little likelihood of finding it now.

Old paint coming down like snowflakes on commuters and kids everyday can't possibly be healthy.

A lot of those surfaces in stations are new since '78, when lead paint was banned.

Most non-station surfaces are not painted.

Big difference between seats in the middle of a car and the corner seats of a car.

Citation needed. Which do you believe is worse?

Did they check the T restrooms?

... the elevators before there were public restrooms? (Ewwwwww!)

The next time I take the Vomit express, jump over puddles of urine and are subjected to passengers taking dumps in Bomb Proof Barrels I will feel a lot better because Harvard scientists safe its safe.

Why did they skip the Blue Line?

They should sample some places that might have different organisms from the norm. Many of the riders on the Blue line are coming in from Logan, possibly bringing some new and interesting creatures with them. Also, stops near hospitals, such as Charles or Brigham Circle might also have some of the germs endemic to these hospitals.

Isn't exposure a good thing? Makes our immune systems smarter? If you're too clean and not immunized you will get hit. It sucks. All our immune systems undergo a lot, do not fear! Embrace it.
I just don't like touching anything on the T. And wash my hands as soon as I get to work, easiest precaution.

Do those vinyl straps

Do those vinyl straps accomplish anything?

Since they can flop around in any direction, I don't see how they provide any support to a standing passenger. And I often hit my head on them. And now we see they're the dirtiest surface on the T.

I say get rid of them.

They were installed because the vast majority of female riders (and a fair number of male ones) cannot reach the cross bars mounted umptybillion feet in the air.

They are quite effective for us vertically-challenged riders to secure ourselves against being thrown around.

I ride the T at least twice a day, seven days a week and I almost never see anyone using those straps. In fact I notice that people actively avoid them, trying to grasp onto any other surface to steady themselves. I tried them myself once or twice and they provide no support.

What about Pigeon Feces Bus Depot

Who's a good dog? You are, Luna, yes, you are!
Adult hired by BPS to work with student leaders tried to get them to cry
Euroimposters impersonate local Web site, sell tickets to Van Gogh exhibit, but probably not the one you're thinking about
Election roundup: Another candidate announces run for mayor; that makes seven now
Student member of Boston School Committee says he's fed up, resigns
Barros is in; to make announcement in morning