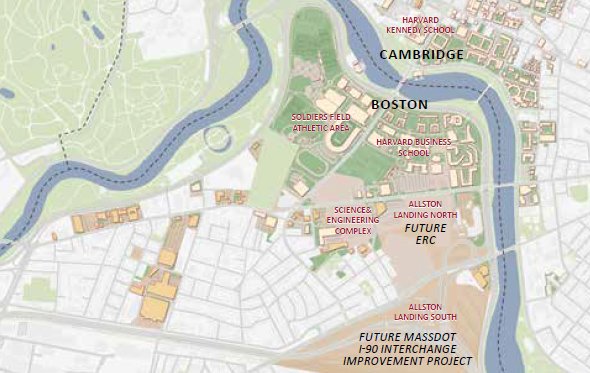 Harvard today filed plans with the BPDA for a large mixed-use development on 14 acres of its Allston land - near where the state recently put off any plans for a new commuter-rail station - plans that include access to a new station on the Worcester Line that just last week state planners said they wanted to put off until at least 2040.

Harvard first proposed some sort of Innovation District-like area in 2011. Its filings today fill in some details - and request that the BPDA formally throw out the existing zoning on the land to create a new "planned development area" that would be "a vibrant and exciting urban district focusing on research, entrepreneurship and innovation."

The ERC will become a hub for both large and small companies and non-profit organizations pursuing a wide range of opportunities for applied research and entrepreneurship. Its development will facilitate community and academic collaborations across the region. For some enterprises, Harvard's strengths in business, science, engineering, medicine, design, law, and liberal arts will be important attractions. These groups will also benefit from the proximity to neighboring research institutions and Boston's world leading hospitals.

The new campus would be centered on a new road to be called Cattle Drive, in homage to the area's former focus on cattle; Harvard said the campus would include bike lanes, charging stations for electric cars and ways for workers to carpool.

I wonder if Harvard got behind West Station, since they are going to be nearby, if MassDOT would rollover and allow West Station to be built sooner than 2040.

They were funding it

At least partially. Harvard 1/3, mdot 1/3, BU 1/3 but BU didn’t want bus lines running from comm Ave to the station and wouldn’t commit. I think this might be one of the reasons why the project is in jeopardy of at least being delayed (hopefully not cancelled). BU would benefit most from the buses!

what about the cash?

Are they going to help fund it as planned if it goes forward. Easy to say you're for bus routes if Harvard is left holding the bag.

I’m going to say it

Stations paid for by abutters

there's precedent for this, both nearby at Boston Landing (New Balance) and in Somerville at Assembly Row. I wonder if Dedham Corporate Center is another such example?

Just put in the station now.

Just put in the station now. This is so dumb. Urban neighborhoods planned around cars are doomed to fail. Just look at the drivers going about 0 mph in the seaport during rush hour. Look at the billions wasted on space for parking.

the South Boston Waterfront and Assembly Row could have been planned out so much better if they focused on pedestrians, bikers, trains and buses instead of cars. the flow of people would be much smoother and quicker.

(sigh) this is isn't rocket science. one day we'll get it right. maybe the widette circle development will be the one.

Assembly Row has a train station

It was dropped in right along the Orange Line next to the development. I'm not sure what else could be done to make it more train-friendly, other than developing the surface parking lots near the station (which is in the future plans).

All the streets going through it are unnecessarily car-oriented.

Part of the reason it has as much car stuff as it does is because part of the development predates the newer portions by decades.

It is very bike friendly - although the MBTA should have more commuter racks there. Maybe it will when the dust settles.

Bus service is still an issue if you aren't coming in on the Orange Line.

Once upon a time, it was so car centric that they made cars there.

There are literally thousands of free parking spaces at Assembly Row. Those little streets around the shops have no bike lanes and minimal bike parking. The crosswalks to get from Homegoods and those other shops to the new development are invisible to drivers. Most of them are hidden between bushes and not well-lit. Certainly not pedestrian friendly.

You're not incorrect, but there is a nice path along the Mystic and there's mostly connections to Charlestown with one short exception. Compared to most of these suburban style outdoor malls, Assembly Row is notably better. But it still has a ways to go to be "good".

It's not so bike-friendly to

It's not so bike-friendly to get to Assembly though, unfortunately. They way in from the East end of Broadway is decent but out of the way for most people. The only direct ways (from the South-ish) that don't involve mixing it up with a lot of traffic are that, or side streets and pedestrian crossings to get past 93.

There's a pedestrian and bike path going under Fellsway (Route 28) to Shore Drive in Somerville, from which one can get to Temple Street and Winter Hill.

It's nice and I've used it, but if you're coming from say Union Sq it's almost as circuitous as going to (nearly) the end of East Broadway. The only direct-ish way would be sidewalking McGrath or jumping over to Garfield, then using the crosswalks to get under 93. It's doable but not great.

The most direct route from Union Square

is Walnut Street, but that's a steeeeep climb on a bike.

Depends on where you come from

You can ride on off-street paths all the way from Riverside Ave. in Medford.

A neighborhood built around a

Only if there's greater distribution

If the GLX is cancelled, again. If so the T can use that money for a variety of different projects. With $1 Billion the T can build West, purchase the small self-propelled rail cars for West Service, build a people mover to Logan from Blue, and even a people mover from Orange to Wynn all while paying off the Big Dig debt. Each project will boost not only Allston but the entire metro, unlike the GLX.

so essentially they're going to leverage harvard into funding west station themselves, right? not that i think thats a bad idea...

In 2013 Harvard proposed a wide "greenway" boulevard that would connect North Harvard Street and the Charles River (near Genzyme / Western Ave Bridge)
Now, not so much
https://twitter.com/harrymattison/status/936962167131267072

Hundreds of people bike every day on N Harvard going to/from Brookline, Allston, Cambridge. Cycletracks from Western Ave to the Andersen Bridge would be a big improvement.

If we get the bikes off North

If we get the bikes off North Harvard, can we get back the nonresident parking on both sides?

Ok, I'll compromise. Keep the bike lanes, but put back the unrestricted parking on one side, by shifty a travel one into the width currently taken by the yellow stripes.

Board concludes Allston karaoke place didn't overserve woman who suddenly collapsed; asks if she might have been drugged
Man dies in motorcycle crash on the turnpike in Allston
Our rainbow drought ended this evening
New owners of venerable Allston bar seek to add performances by local musicians and trivia events
Lowly former pharmacy in Allston could be replaced by brawny apartment building
Allston gets Uyghur food