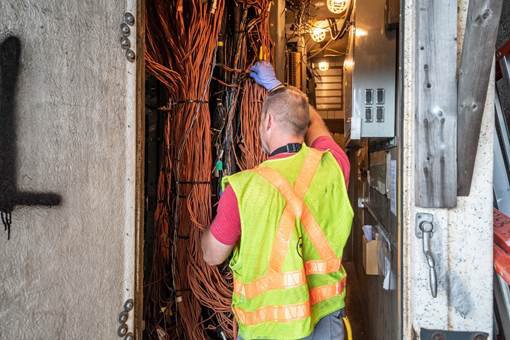 Working on the wires at JFK/UMass. Photo by MBTA.

With repairs to the destroyed JFK/UMass signal bungalows continuing apace, the MBTA announced today it hopes to restore fully automated signaling between JFK/UMass and Broadway by Aug. 15, which should cut five minutes off the longer Red Line commutes.

The T says that means it should take 35 minutes to get from Braintree to South Station, down from a peak of 55 minutes right after the
still unexplained June 11 derailment. Before the derailment, the trip normally took 30 minutes.

The T says its repaired the three destroyed bungalows, which contain miles of wiring and signaling equipment that control 29 signals and 11 switches along the Red Line, and added a fourth new one.

Since the derailment, crews have been working to salvage, test, and assess the repair needs of over a thousand damaged electronic components and pieces of equipment in the bungalows. In addition, nearly 20 miles of signal cable were tested for connectivity and repaired as well as over 800 signal control relays, 35 track circuits, and numerous other pieces of related equipment.

Wow! With a lofty goal like that, I guess people won't be TOO upset when they miss their target and actually end up increasing the time by a few minutes.

But what about Ashmont to South Station?

Why the he’ll can’t a human

Why the hell can’t a human do this job as well as a bungalow for the next 5 plus weeks. They’re not even trying!!!

Braintree line customers get to:

Get off at North Quincy from 'about' 8:45PM until end of she service Sun. -Thur. This weekend, there was no red line train service between Braintree, Quincy Adams, Quincy Center, Wollaston all day Sat. and Sun. They operate 'Yankee' buses between these stations to and from North Quincy, where subway service begins and ends. These buses have only one front door to get on or off, and they pack people in. My stop is Quincy Center. Week nights it can easily add an extra half hour or more. I work near South Station. Under 'normal' circumstances it should take about 20-25 minutes to go the roughly 10 miles to Quincy Center. That can be changed to 1+ hour with the musical chairs routine now going on. And Braintree inbound and outbound trains are PACKED. Morning rush hour, frum about 1:30-2 PM daily rush hour until 10PM. Even 11PM they are crowded. I see Ashmont trains go by half empty. Not Braintree.

If you keep posting about the mbta and how bad it is during the upcoming heatwave people / property are probably going hurt / damaged.

Are pissed and when they consistently read about how bad things are it might trigger sometime idk I ride the orange line everyday and seen some Cracrazy stuff. Just a thought I had.

What do you suggest?

Journalists only report everything with an upbeat slant? That... does not seem like the right approach.

I love how in the video of the incident just released by the MBTA, the people on the platform aren't even fazed by multiple explosions and the derailment of the incoming train. Just another day on the T.

This is the best comment I’ve ever read on Universal Hub.

It blows my MIND that a full

It blows my MIND that a full minute and a half passes between the first shot of light until the time that somebody "in charge" comes trudging along... and the conductor is just sitting there in the cab. The whole time. Trying to remember the basic BS lines they're told to use on the half-working intercom when something gets fouled up. Get the lead out!

The T is notorious for gatekeeping any information when something goes wrong. I'm tired of the way that the mayor and the governor keep toeing the line with it, too. Fat chance they didn't see this video as soon as it happened!

Everyone rides the T... we need someone in better touch with day-to-day Bostonians. I'm glad nobody was hurt. I'm thankful for the work that the people are doing... but someone in charge has got to take the fall for this.

The moment the train hit

The moment the train hit those signal bungalows the signals went out. When the signal code suddenly disappears the train will dump all the air pressure and come to a stop. Initially, the motorperson on the derailed train might not have known what caused the train to stop. The motorperson on that northbound Ashmont train on the other track however must have seen the whole thing happen and was probably on the radio right away.

It blows my MIND that a full

It blows my MIND that a full minute and a half passes between the first shot of light until the time that somebody "in charge" comes trudging along... and the conductor is just sitting there in the cab. The whole time. Trying to remember the basic BS lines they're told to use on the half-working intercom when something gets fouled up. Get the lead out!

It wouldn't surprise me if it was actually procedure in this case to stay in the cab. Short of screams/fire/carnage that would require immediate evacuation, the train operator is probably tasked with any or all of - hitting an alarm, getting on the radio to call in the emergency, putting the train in the equivalent of neutral or park, setting the brakes, seeing if the brakes will work in the first place, checking to see if he/she still has any control connection to how many cars (such as opening the exit doors), getting on the PA to remind people to NOT use emergency doors facing possibly live track....
"Get the lead out"? Sure! ...and if the train operator "gets the lead out" by hopping out, running back to see how bad the damage is, etc.... - and some control he/she left set in the operator's compartment fails and the train starts to roll away without them?

I know you're being ironic, but still -- those bystanders made me sad. Perhaps I'm wrong, but nobody but the driver seemed to even try to call 911. That derailment looked kind of violent, and I feel badly for the people who were stuck in that car. How scary that must have been for them.

will they be running the normal number of trains?

This is what you get when you elect Charlie Baker. Republicans despise public transit and the people who use it because they are lazy and greedy and their political party has prostituted themselves to the oil and coal companies.

Putting this on Baker is hilarious.

The local Dems have financially poached and exploited the T for years...for decades +.

The T has been a dumping ground for those Union “workers” with local political connections. Local politics have very little to do with the Republican agenda your straw man points at.

Open up the books to all City Agencies by a 3rd party auditor: Housing Authority as well...

It’s not the Republicans taking you for a ride in this instance. Pun intended.

Baker was working for the Pioneer Institute.

The Koch Brothers have long been battling attempts in this country to have decent public transit, and have been actively destroying systems for years.

Baker worked for the Koch Brothers when he came up with his half-baked "Forward Funding" scheme that has caused so many problems FOR THREE DECADES NOW.

That scheme is why the T is collapsing so badly - it isn't neglect, it is malicious attacks.

He's not alone in the blame for this - Stanley the Northampton Whore also owns some of this (aka "we can't subsidize Boston now where's my $50 Million for storm repairs for 50 people") as do Tommy the Grifter Finneran and Bob DeLoser and Billy "I'm not my brother's keeper" Bulger. All of them have helped the T to this grave state by grandstanding and spewing bullshit for the dependent but proud non-Boston parts of MA to lap up.

But Baker is still highly responsible for this mess going back decades. And he still wants to destroy the T because it just isn't fair that workers get decent wages and benefits when his Kochsucking friends could be sucking massive profits while screwing workers blind.

Come-on -- One can only be so much a of shill for the non-functional MBTA
it didn't get nicknamed Mr. Bulger's Transit Authority because of its efficiency and reliability

The core of all of this goes back decades -- the financially staggering Boston Transit System [MTA] was made into a State Agency MBTA -- circa the time of the Apollo project. This necessitated expanding the scope of the T to provide some service to the residents of the now vastly enlarged MBTA District. However, despite status as an Advisory entity ostensibly representing the residents and taxpayers of the district -- all of the controls were in the hands of the Legislature and its corrupt patronage system.

Since that time the T has been the dumping ground for the ne'er-do-well brother and sister in laws and useless friends of the members of the Legislature. The same was true of the old MDC and the Turnpike Authority. They [MDC, Turnpike Authority] are gone finally absorbed and operated as a parts of the at least somewhat organized and controlled Executive Branch under the Governor.

The best thing that happened to the T was the disaster in the endless Winter and the establishment of the Financial Control Board with the ability to temporarily avoid some of the worst practices of the T. The T's Pension System is finally emerging from within a cloud of backroom smoke and the accompanying mirrors. Unfortunately, below the top-level Fin Board the old layers of dead-wood and their associated practices continue un-molested.

Short of pushing the Reboot Button*1 -- the best thing that can happen to the T is to have the Legislature give the the top--level management the power to hire and fire from top-level management all the way down to the union sometimes workers. The other most important easy change would be to adopt the Best Practices of similar systems in North America and the rest of the world where appropriate.

*1 -- the T should be made a part of Metro Boston County along with Massport, MWRA and all of the old MDC parks and Parkways. This entity roughly 5M people covering the footprint of I-495 ish would have an elected executive, and legislature able to do what Barnstable and Berkshire Counties can do -- raise and spend its own funds

Yesterday while stuck at Broadway station on a delayed outbound train to Quincy a subway preacher entered our train and extolled the virtues of Jesus. Most of us ignored him but one passenger asked for the help of Jesus in getting the train moving and the air conditioning to work. Seconds later the preacher left the doors shut the air conditioning was working and we had a smooth ride to Quincy. Thank you Jesus.