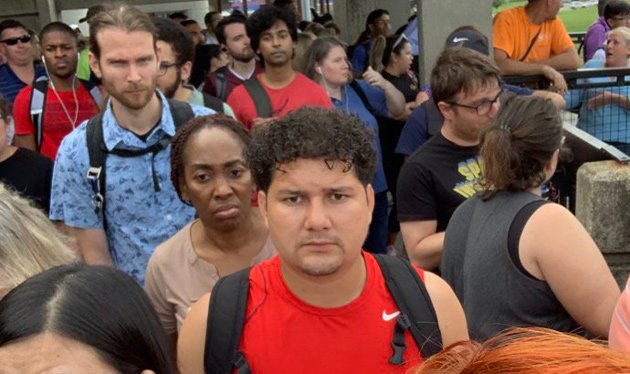 You can guess how these Orange Line riders at Community College are feeling while waiting for a shuttle bus. Photo by Spiffs Queer Adventures.

The MBTA has to reset its "It's been __ days since last T disaster" signs now that a track fire erupted under a train at the Malden/Medford line shortly after 3 p.m., forcing its passengers to evacuate on the tracks and shutting down the entire line from Community College to Oak Grove just as rush hour was about to start.

Kim Vanderbeck has videos and a running description of her sudden status as an Orange Line refugee:

Raise your hand if you’ve ever been on the @MBTA when it caught on fire and had to walk the tracks in Malden and climb through a hole they cut in the fence.

Liz Double-U reports overhearing an urgent message from an MBTA bus dispatcher while riding a 93 bus in Charlestown:

Heard call for all operators pulling out to please advise and redirect for emergency shuttle service...

The T is tweeting that shuttle buses are on the way but at 4:05 p.m., FrettyDavis reported:

Not one shuttle bus at Sullivan Station. But lots of angry people. 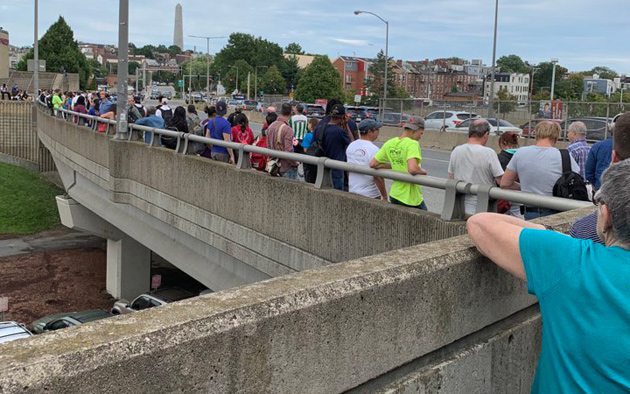 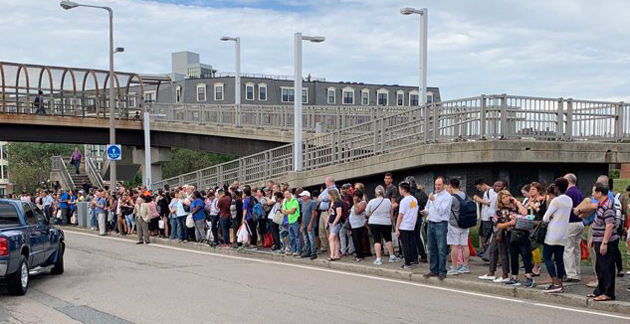 Easily over 100 people and have only seen one shuttle bus in about a half hour. So glad we’re paying so much for this garbage service.

Kyle is also among the hordes at Community College:

There is not a single MBTA employee at community college. We are getting directions from a homeless man to where the shuttles are

The fire also halted service on the neighboring Haverhill Line.

Trisha F. watched the evacuees coming off the tracks: 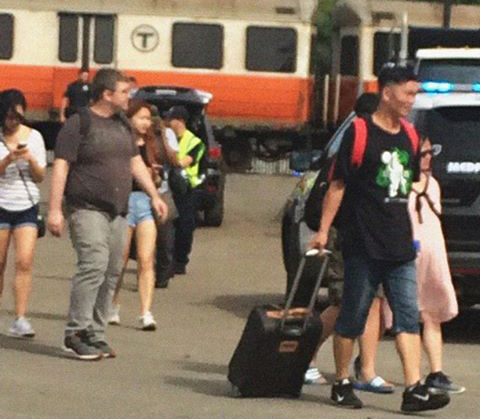 It's called Jerry's Gate in Medford off Medford Street. It's behind a mini mall. It' where the train stopped and the passengers evacuated.

Corey, one of the people caught waiting for a shuttle bus, sighs:

The salt in the wound is I brought home some killer potato salad from work that’s gonna get gross in this heat. @MBTA you bastards owe me some potato salad, dammit!

I have a backpack full of over ripe bananas from the office that I am taking home to make muffins. I'm sure everyone on this shuttle bus is real happy with the smell...

It has gone from bad to worse. I believe this is the last time I will write to you. The track fires on the #orangeline has left all of us trapped in the city. There is no escape. There is no hope. I will send you my monthly pass as there are no refunds.

It didn't take out one of the brand new cars.

The fire was under one of the rolling rec rooms.

Some things in life are bad
They can really make you mad
Other things just make you swear and curse.
When you're chewing on life's gristle
Don't grumble, give a whistle
And this'll help things turn out for the best...

The train's a piece of s**t

Can somebody build an app?

Something that can send e-mail to every state rep and senator and executive office each and every time the MBTA fucks up. Not just a hand full ... EVERY ONE.

I suck at these things or I would do it myself.

If they all had to deal with a deluge every time something went wrong, they might pay more attention.

Otherwise, maybe each time there is a mess up, a random car in the statehouse garage is sacrificed?

Just use a rule in your email client and a contact list of all the state politicians you want to email, and Boom! Every time an alert gets out, it'll be sent to that list. Their mailbox will be flooded with alerts considering how many times a day there's an issue.

Of course, it wouldn't take much for state IT to complain the your provider to have the account taken down, but it'd take a few weeks and several thousands of emails later.

Imagine if a few hundred people did this.. the state's mail servers (Office365 to to be exact) would be flooded.

Of course this is all in theory and not a real idea. *ahem*

...and sacrifice 10 cars in the statehouse garage for each incident.

"forcing its passengers to evacuate on the tracks"

Trying to extinguish the fire?

The important question is why

The big logistic question I have is why was the line shut north of Community College. Standard procedure is to close north of Wellington, and since the fire was in that stretch, we know that Wellington south could have stayed in service.

By 5 pm, service was restored to Wellington

I happened to be on a train from Roxbury Crossing that was originally announced to end at Community College, but by the time we reached Chinatown, it had been cleared to continue to Wellington.

It looks like it could be a shoe-beam fire (the wooden assembly that holds the third-rail shoe assembly) on the b-end truck of the second car. That could have caused the air bag in the suspension to blow, which might then spread flames to track ties. Shoe beam fires in the past have beeen caused by debris such as plastic bags or newpapers getting wedged in the assembly.They are inspected on a regualr basis to make sure they are clear of debris, but stuff can still get in there.

Between North Station and Oak Grove the only cross-backs are at Community and Wellington. All power in all of Wellington was probably killed at the request of the fire department until they were sure what was going on. Once it was clear the issue was isolated to the underpass under the old Medford branch, they were probably allowed to restore power as far north as Wellington station.

Nothing says Boston more than

Malden helping smaller namesake devastated by forest fire in Washington state
Brief but intense storm
Being a mom and being an elected official in the age of coronavirus: Such a conundrum
There can be only one 99, lawsuit demands
The all important Dunkin' tracker
Malden charter school closes, citing coronavirus