Revenge of the Mooninites: Bomb squads in Boston, Cambridge respond to suspicious objects, blow up at least one, then discover they're part of a marketing campaign 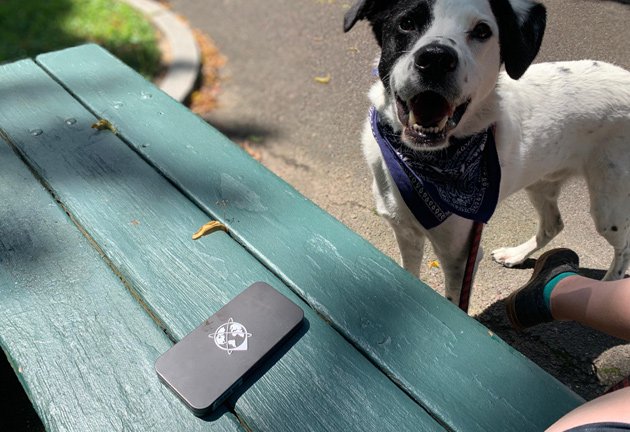 One of the boxes on a Cambridge bench yesterday while guarded by Bronson.

UPDATE: Group that says it's based in Rome takes responsibility.

Bomb squads from both Boston and Cambridge Police today recovered small metal boxes with taped "Open Me" notes on the side as the departments urged the public to be cautious and to call 911 if they found more.

At least one of the boxes turned up on a park bench along the Charles River in Cambridge yesterday, where a woman spotted it and opened it - and found a $50 bill inside.

At 5:44 p.m. today, after bomb squads were called to two locations in Boston and at least one in Cambridge, Cambridge Police tweeted:

This possible suspicious package was identified as a tin can with the message "open me" by our Explosive Ordnance Unit. It has been investigated and cleared. Appears to be part of a marketing campaign. In the event others are located in #CambMA, please report them to CPD.

Live Boston reports that Boston Police bomb experts found and removed two of the boxes, one around 12:20 p.m. at the Charlestown Navy Yard and around 1:30 p.m. at 1 Beacon St., outside the Santander Bank

Boston Police are investigating whether these items were placed with malicious intent. Police are advising community members to exercise caution should they discover similar objects and to call 911 immediately.

Live Boston reports the Charlestown object was brought to a secure location and detonated.

Amy Brown reports she was out for a walk with her dog, Bronson, yesterday when she sat down on a bench along the Charles near Harvard Square and spotted a tin with an odd global symbol on it, with tape on one side reading "Open Me," which got her curious enough to, well, open it:

I made a few jokes in my head about it being a trap, but I still opened it pretty much as soon as I sat down and it was next to us. I opened it, looked pretty crazily around to try and catch someone watching or filming or something to confirm I'd just found $50 in the park and it wasn't a weird joke.

She adds that a Google image search on the emblem came up empty and that the only other identifying mark was a five-digit number under the "Open Me:" 00989.

She reports she'll use the new money for some margaritas and street corn at the Lone Star Taco Bar.

I'll have an extra margarita for those people more cautious of random packages with directions on them.

Wicket the cat guards the box, its fortune-cookie-like message and the $50 before Brown and her boyfriend go and spend it: 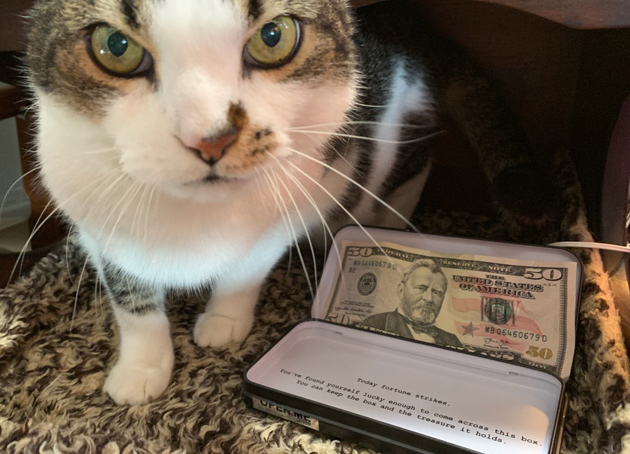 A marketing campaign for WHAT

A marketing campaign for WHAT???? Sorry. Bad idea. In fact, stupid. You just lost a huge market. But Andy Warhol did say everyone gets their 15 minutes of fame.

You are talking about it,

You just lost a huge market.

The coveted "too fearful to leave their homes" demographic.

The “people who call 911 on an eyeglass case” market.

They also lost the

They also lost the UHub demographic.

If you blow up that photo (heh), the 'fortune-cookie-like message' inside reads:


Friday fortune strikes
You've found yourself lucky enough to come across this box. You can keep the box and the treasure it holds.

If I find one, I am totally going to turn it over to the police.

After I take the money.

But how does one know if the money's real or counterfeit?

After I take the money.

seems kind of risky. How would one know if the money is counterfeit or real?

Going to a bank to find out might not be a bad idea.

I want to know too.....what is it marketing? who put them out there?

Which one is more adorable?

The dog is adorable. The cat looks like a fierce guard cat, protecting the money she's going to buy catnip with.

Other people on Reddit said they found these in other parts of the world too. They all had local currency. So, the bomb squad is blowing up money and telling people to call 911 so they can be sure to take the money?

Until we find out the money

Until we find out the money is smeared with samples of Captain Tripps and the Walkin' Dude takes over the remnants of civilization.

Cops think they are the only

Cops think they are the only ones allowed to get money they didn't earn.

What about those who

What about those who inherited wealth?

In other countries all over the world

People are interacting with these boxes as intended.

Believe it or not, they're even getting a bit of enjoyment out of it. Having a laugh and getting a few bucks out of the interaction in the process.

We'll soon have the kids who were kids during 9/11 having kids of their own.

2 generations weaned on post-9/11 anxiety and fear, fealty to authority, and military worship. Little children never knowing what "life during peacetime" even means.

Don't chat with the clerk in an international grocery store.

Don't leave your neighborhood without a gun.

Well this is the country that

Well this is the country that AMNESTY International declared a travel warning for and you 100% retweeted that, so maybe the joke’s on you?

it is kinda dangerous in some places, especially for foreigners. China tells it's people to try and avoid our East Coast entirely and Mexico warns it's citizens to get their vaccines before visiting the U.S.

Think about THAT one, comprade.

about 15 years ago i got a random metal box in the mail with those initials on it.

we took it to the fire department (i guess they blew it up).

And if you type "i.y.d.g.y.d.k." into Google this evening, the second search result is THIS POST on UHub!

Found one of these at the BlueBikes station in front of Cambridge Public Library on Broadway last night. Only $20 in ours though!

I mean I'd probably angle it

I mean I'd probably angle it away from my face when I opened it but it seems physically improbable that it could carry any truly dangerous payload. ARG would have been my first guess.

Sorry for causing all the

Sorry for causing all the trouble, we did not mean to! We are doing a social experiment all around the globe in which we are giving away money in these boxes. The goal of it is to find out what people do with money they would not have had. We are more than happy that people already donated the money to charity. For more info please follow @snoopos on instagram.

Is that a phone too?

Into our lives it has creeped.
It starts when we're always afraid.

"For What It's Worth"

Written by Stephen Stills. Originally about the 1966 teen riots on Sunset Strip. The song also took on great resonance to American soldiers fighting in Vietnam at the time.

They did the best cover video of it, paws down.

At least they weren't Lite-Brites! Those things were truly terrifying!

Well, if you were BPD

or Martha Coakley, they were.

They had batteries ... and WIRES!

The Mooninites were victors

After shutting down the subways and highways they laughed at and mocked the efforts to prosecute them and were awarded a huge contract from the city for First Night.

Menino had some good anti

Menino had some good anti-terrorist training paid for because of that marketing campaign.

Security theatre, sure.
But good practice.

It Was a Hoak Device

That's the singular for hoax isn't it?

As long as they aren't conjugatin' on the Common there won't be any problems.

I just wish they paid this sort of attention to all the trash lying about.
It is just or more as probable that they are dangerous as these items. Trash (and in some area needles) is so ubiquitous that it would be easy to plant a dangerous piece that would totally be ignored.

Cute dog! Not as outraged as

Cute dog! Not as outraged as many here seem to be by the alleged overreaction by the cops. Local news showed a black container about the size of a large breadbox that the cops were calles about and not a small eyeglass case.

Drivers, pedestrians, bicyclists get to share in angst from Orange and Green Line shutdowns
Former Charlestown High student charged with gunfire as school graduation ceremonies were starting; others still sought
The dark night returns: Eversource grid in Boston flickers out across city
Yes, four of those weird helicopters just flew over Boston
Jury convicts Charlestown man of kidnapping woman, raping her over three days
When will the new North Washington Street bridge be finished? God only knows