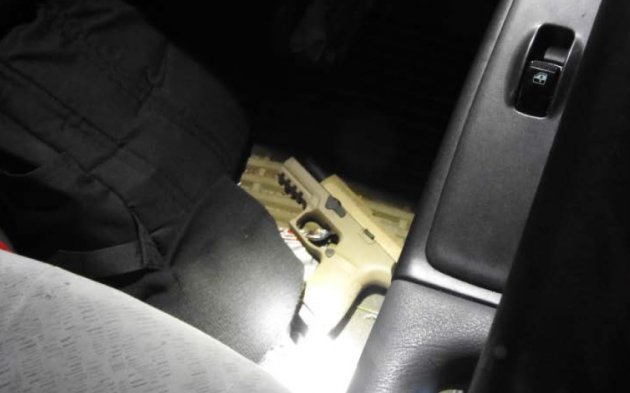 From the affidavit in the case: The gun in the back of Boampong's Elantra.

A Dorchester man who allegedly opened fire on Boston cops the night of the post-vigil rampaging last month now faces charges because one of the cops, a BPD detective, was also a "deputized federal law enforcement officer" - as a member of the FBI's Metro Boston Gang Task Force.

John Boampang had already been charged in Boston Municipal Court with 21 Massachusetts counts of armed assault with intent to murder for the way he allegedly emptied a magazine of bullets in the general direction of police early on June 1. The US Attorney's office this week brought charges against him in federal court - which could get him 20 years in federal prison.

Details of the alleged reasons for his federal charges of assaulting a federal officer, interfering with a law enforcement officer during the commission of a civil disorder and being a prohibited person under felony indictment in possession of a firearm and ammunition are contained in an affidavit by an FBI agent that was filed in US District Court this week.

Among the task-force members who'd been discussing and figuring out how to handle that potential: Boston Police Det. Timothy Stanton. Stanton became a member of the task force, which normally focuses on "gang-related drug distribution and violence through the enforcement of federal drug, firearm and racketeering statutes" in December. Although he remained equipped with a BPD gun and computer, as a task-force officer (TFO) - and "deputized federal law enforcement officer" - he also gained a desk at the local FBI office, an FBI truck and the right to investigate and arrest people on federal charges, the affidavit states.

On the night of the shooting, a BPD command center was established, composed of leadership from BPD, the Massachusetts State Police and other local law enforcement departments. TFO Stanton was working in both capacities that night/early evening, as both a BPD officer and a TFO. As a member of the FBI’s Metro Boston Gang Task Force, TFO Stanton was ordered to collect intelligence regarding suspected ANTIFA activity. Among other tasks, BPD assigned TFO Stanton to one of its public order platoons. As a result, TFO Stanton conducted roving patrols of Boston’s Back Bay and downtown areas, where many retail stores were being looted throughout the night. Although TFO Stanton wore his BPD uniform that evening, he conducted his patrols in his FBI-issued truck, having obtained FBI authorization to use the truck during his duties on the night of May 31 and morning of June 1.

The affidavit then details what led up to Boampang's arrest: Boampang had allegedly driven up to the area of Boylston and Arlington early on June 1 where people had been looting the Hermes and other stores and where, around 2:30 a.m., BPD officers began pouring in to try to stop the thefts.

When BOAMPONG finally moved the car, he placed the car in reverse, without regard for officers or a nearby vehicle. I have been advised that this caused the BPD officers concern, as it appeared that BOAMPONG's car was going to strike officers standing immediately behind the car or strike another vehicle. Concerned about public safety, the BPD officers tried to prevent BOAMPONG's car from causing any injuries and shouted "whoa" and "stop," or words to that effect, several times. BOAMPONG did not heed the officers' instructions, instead continuing to drive the car in the direction of the officers and other vehicles. This caused a BPD officer to strike BOAMPONG's car on its roof or the upper windshield, using a baton, in an effort to stop the car from striking officers and another vehicle. BOAMPONG then drove away in the direction of Charles Street.

But then, the affidavit continues, Boampong returned:

According to the affidavit, Stanton had just arrived at the intersection when:

Less than 10 seconds later, TFO Stanton heard numerous gunshots and, reasonably fearing for his safety, he braced himself inside his FBI truck to take cover.

Boampong then sped off - with BPD officers in pursuit. They caught him, arrested him and held his car pending a search warrant. On June 3, with a warrant, State Police went through the car and found a Sig Sauer P230 gun - which fires the same sort of bullets police recovered on the street - as well as:

A magazine capable of holding 15 rounds of ammunition; one live round of 9mm ammunition; approximately 20 liquor bottles, most of which were unopened and had a green price label with the name of a liquor store that was also subject to looting on the night of the incident, and located several blocks away from the intersection of Arlington and Boylston Streets; three red bathing suits with anti-theft sensors (which I know are usually removed by store personnel after a legitimate purchase) still attached; and three pairs of sunglasses, one pair of eyeglasses, and one earring.

According to the affidavit, Boampong confessed to firing 11 rounds, but denied he was trying to hit anybody, he was just really upset:

After being advised of his Miranda warnings, BOAMPONG admitted to doing the shooting, and complained that he was upset that the law enforcement officers had broken his windshield. He went on to say that his passengers were not responsible, and that he had not been aiming for the officers or anybody else. Based on this, especially his repeated displeasure about his windshield, and all of the other facts recounted above, I believe that BOAMPONG's intent was to forcibly assault, resist, oppose, impede, intimidate, and interfere with the law enforcement officers at the scene because of or on account of their performance of their official duties, among whom were TFO Stanton.

The third charge against Boampong, being a prohibited person under felony indictment in possession of a firearm and ammunition, relates to his arraignment in Brockton in March, 2019 on charges that include assault and battery on a police officer. Boampong was out on bail on those charges on June 1 - he was scheduled for a hearing in Brockton on June 4.

The FBI used to send the rookies out to arrest snipes and bring back buckets of steam. Now they send them out looking for roving bands of antifas.

already out on bail... open fire on cops with passengers.....

Miracle no-one was killed. He should be getting out just before retirement, which is unfortunate, but also fine.

For the federal charges.... thats what happens, The system/DA's are out there to shaft you. He should already know this. Maybe they should have been harsher for his A&B and being out on bail.

but a federal charge because someone in a Boston cop's uniform driving an FBI truck just happened on the scene? If he has a decent lawyer that one will be thrown out.

do you not understand?

How does one "work in both capacities?"

That I don't understand.

I don't think the judge would, either.

At least one of the law enforcement officers at the scene during the shooting was
BPD Detective Timothy Stanton, who also serves as a Task Force Officer (“TFO”) for the FBI’s Metro Boston Gang Task Force. The task force’s primary responsibility is to identify and address gang violence in the Metro Boston area, using joint investigative efforts with local law enforcement agencies. The task force focuses on gang-related drug distribution and violence through the enforcement of federal drug, firearm and racketeering statutes. Stanton was sworn in as a federal TFO on or about December 11, 2019. As a result, I am aware that since 2019, TFO Stanton has served as a federal TFO in a full-time capacity, and has been authorized to make federal arrests for violations of federal criminal law.

In his capacity as a federal TFO, TFO Stanton has conducted interviews, executed search warrants and made arrests. While TFO Stanton’s firearm and computer were issued by BPD, the FBI provided him with a desk and an additional FBI-issued computer, along with a truck to use during his TFO duties. TFO Stanton is in regular communication with his TFO supervisor at the FBI, along with other federal law enforcement officers on the task force.

What part of "Pinkertons looking for nonexistant ghosts"

Do you not understand?

What part of "fascism is here" do you not understand, pops?

So I guess your definition of fascism...

...when the cops get shot at, they arrest the guy then do fascism on him?

Your red ryder bullshit is getting old.
He's in the hands of the feds and the Commonwealth will get a crack at him...later.

So, what's with the age cracks? Feeling a little arthritic on your crosstown bicycle rides? Getting a little winded? Knees starting to crack a bit? Looking online for magic cures?

One of Trump's goons

Massachusetts Constitution declares this "a free, sovereign, and independent body politic, or state by the name of THE COMMONWEALTH OF MASSACHUSETTS". Screw the feds.

How does this work in real life. The officer is a member of the BPD and FBI. To which organization is he most loyal too, Example: if he gets conflicting orders.
This setup stinks.

I'm not part of this org and

I'm not part of this org and am just guessing, but having worked for some joint government operations before, there is a momorandum of understanding, or similar doc that outlines the working relationship. Happens all the time.

.
How does this work in real life. The officer is a member of the BPD and FBI. To which organization is he most loyal too, Example: if he gets conflicting orders.
This setup stinks.

Thank you for the info

Great. Now let's find out what out of state gun shop sold that weapon.

Green Line trolley derails between Copley and Hynes; no injuries, at least
Orange Line seat-hog rage at Back Bay sends one to the hospital, shuts service
Lego bricks and mortar: Company to move US headquarters to Boston
Back Bay medical assistant charged with second patient sexual attack
Medical assistant at Back Bay health center charged with raping patient in exam room
Boston consulting firm hired by Twitter's old management sues because the new owner won't pay it for the work it did