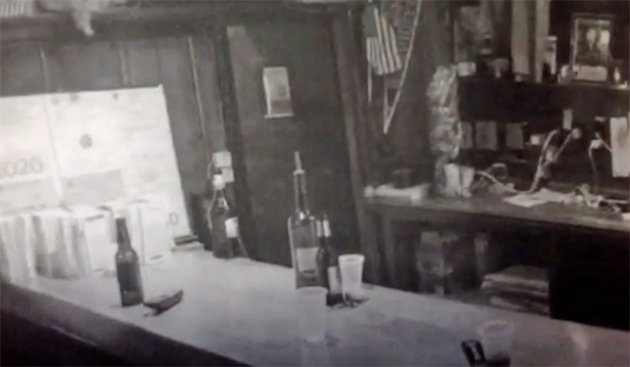 The offending beers and a bottle of Jameson on the counter.

Tom English learns Thursday whether the four months he's had to go without a license for his eponymous Cottage on Emerson Street is punishment enough for the way two licensing detectives found him, a contractor and a third person inside with beers on March 21, after the city had already told local bars and restaurants to shut.

The Boston Licensing Board, which ordered his license seized because the incident, votes Thursday whether his inability to open even for takeout since then is punishment enough or whether he deserves an additional sanction. English says that if he gets the license back, he could re-open for takeout - he has a full kitchen - in two weeks.

According to BPD Sgt. Det. William Gallagher, he and Det. Eddie Hernandez visited the bar around 4:15 p.m. on March 21 on reports it was still open - two days after detectives from District C-6 had visited the bar and told English to shut down under a city edict because of the burgeoning Covid-19 crisis.

At a hearing conducted over Zoom today, Gallagher said the door was locked, but that he and his partner could hear people inside. After several minutes of banging on the door, he said, English unlocked it and let them in. Gallagher said that in addition to English, two other people were at the bar, along with beers and a bottle of Jameson Whiskey.

At the board's direction, he ordered Walsh to hand over his license for violating a board directive to shut.

English's attorney, Curt Bletzer, acknowledged his client, his daughter and a contractor were in the bar, but pleaded for mercy: He said English had, in fact, closed the bar to customers but that he and the contractor were inside after repairing an outside grate that had fallen down - English was hoping to get the place in good shape for a potential sale.

Bletzer apologized to the officers for English not responding immediately to their knocking, but said that was because English had become inured to people knocking on the door in those early days of the pandemic to ask when he thought he might re-open.

Bletzer continued that there was considerable confusion in those days - South Boston bars agreed to close voluntarily on March 15, originally in advance of St. Patrick's Day. That was the same day Gov. Baker ordered restaurants to shut their dining rooms, originally just until April 7. Then the city ordered bars in general shut.

Gov. Baker did not issue his emergency public-health declaration that, among other things, definitively ordered bars shut, until March 23, Bletzer said.

English did not realize that the city order to close extended even to owners and contractors enjoying a beer after a hard day of work, in this case on the grate.

"He wasn't running a business in there, he was closed, the doors were locked," Bletzer said.

But Licensing Board Chairwoman Kathleen Joyce said ignorance of the law, or, in this case, board edicts, is no excuse - that if English had questions whether the board meant to bar everybody from drinking inside, even owners, he should have contacted the board. She said the board has tried hard to be accommodating to license holders during the pandemic, but said that every single time the licensing detectives have to enter an establishment on reports of a possible license violation, "they put own lives at risk," she said.

"And that's something that the board takes seriously," she said.

What a giant waste of

What a giant waste of everyone's time (and taxpayer dollars.)

Someone dropped a dime on Tom .

the guys a knucklehead

but this is just so god damn redonkulous

This is ridiculous overreach.

Someone has to be the example

I think he has suffered enough at this point, but if the authorities weren't harsh near the beginning, we'd have little speakeasies all over town.

I know from experience it's pretty common for Restaurant owners to offer a free drink to contractors and family when the place is closed. It's not the same as running a speakeasy.

The fact he didn't open the door is also BS. The place is closed. Did the police at least identify themselves as such when knocking?

Unless the board has proof he was opening to the general public or charging the people caught for drinks they have really overstepped their bounds.

You can argue he wasn't practicing social isolation but there wasn't and still isn't a law prohibiting private gatherings. It's not a good idea but it's not illegal provided it isn't being run as a business.

Perish the thought of society, and Boston in particular, learn to relax around adults consuming alcohol. What's next, drinking outdoors?

Can't the Licensing Board be put to work doing something useful during the emergency, like filling in potholes or something

Instead of zealously going

Instead of zealously going after a business owner sharing a beer with his contractor buddies behind locked door, I'd love to see a City board and cops enforcing explosive (fireworks) regulations with the same enthusiasm between May and early July next year.

Is there a tiff between Gallagher and English?

Gallagher didn't just show up there - he was sent there after the city got complaints, two days after C-6 sent somebody over there in response to complaints.

Lol, of course this is overreach on a stupid technicality, but I have no sympathy here.

Tom English’s should be forever known as the place that put up stuffed monkeys to honor Black history month in 2000. “The [Herald] also reported that the bartender said a stuffed gorilla wearing a crown adorned the bar for Martin Luther King Day.” Class act.

Tom English’s Klan Kottage can rot and I wish them all the regulatory nuisance cases that are rightfully brought against them.

It was black history month.

It was black history month. Get it right. And it was a jungle theme and there was photographic evidence to support it. Keep on hating for a reason you don’t know.

"It was black history month. Get it right."

I never heard of this, but

I never heard of this, but this happened when Black folks my age were still actively avoiding Southie. I don't think I purposely ventured there until '05. For reasons like the article and racial violence suffered by my peers

Yes. I remember seeing that

Yes. I remember seeing that shit in the window.

Wow this is completely

Wow this is completely ridiculous. They were closed. As evidenced by the knocking. And that part about putting detectives "lives at risk"..... disingenuous horseshit.

This makes me so mad bc it is absolutely the pattern of aggression and dominance via technicality that is at work in the police aggression we've seen and experienced in cases like Sandra Bland, Eric Garner, George Floyd, and all the unreported aggressions that happen to all kinds of people every day.

Got his head split open (literally) by a Baseball Tavern bouncer, and they kept their license. This board is a joke.

What a waste of money and

What a waste of money and time to punish people already under the gun. Maybe they should reallocate our tax dollars to something that really matters instead of paying these people to enforce rules on folks that aren’t bothering anybody. God forbid you have a drink after contemplating the future of the industry that is falling out from under you. This is an expensive problem... not a solution. I guarantee if you ask the vast majority of the citizens of Boston if this type of infraction bothered them they would laugh in your face and tell you those folks deserve a drink. Terrible miss management of our tax dollars. Pay someone to help the community and get rid of these ABC cops that are just wasting our tax dollars.

Gunfire at Medal of Honor Park in South Boston
Not the biggest of surprises, but St. Patrick's Day parade canceled again
South Boston restaurant owner tries to keep workers afloat through GoFundMe, T-shirt sales
Citizen complaint of the day: Is that a traffic sign on your pole or are you just glad to see me?
Who, who, who goes there?
Amrheins in South Boston shuts down for a bit