State elections officials agree not to complain to Twitter about failed Senate candidate between now and Nov. 4

Faced with a possible temporary restraining order, the Secretary of State's office this afternoon agreed not to file any complaints with Twitter about anything Shiva Ayyadurai tweets between now and 9 a.m. the day after the election.

Ayyadurai, who started a write-in campaign against Ed Markey after losing the Republican primary in September, had sought the order - and $1.2 billion in damages - for what he alleged what the way the Secretary of State's office bent Twitter to its will and made the company delete several tweets he wrote to buttress his allegation the state destroyed one million ballots after the primary as part of a massive fraud campaign against him.

US District Court Mark Wolf had earlier told Ayyadurai there's no way he's getting any money, let alone $1.2 billion, from Secretary of State William Galvin, because of the pesky 11th Amendment, which bars suits for damages against state officials in federal court.

However, the issue still remained of the single complaint the office submitted to Twitter about an Ayyadurai tweet that claimed the Secretary of State's office destroyed one million ballots and whether that complaint was "state action" infringing Ayyadurai's right to free speech. 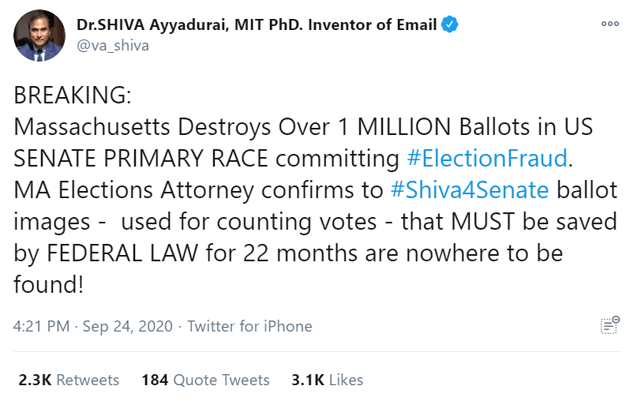 At a hearing today, Ayyadurai, now acting as his own counsel after firing his lawyer earlier this week, argued that of course it was state action, that Twitter is under enormous pressure to stamp out "election disinformation" and so naturally it responded to the complaint form by squelching him, to the point of suspending his account for two seven-day periods at a critical juncture in his write-in campaign.

Two elections-division officials, who spent nearly 3 1/2 hours in the Zoom conference today, rather than working to prepare for Tuesday's election, however, said they filed just one complaint, never heard back from Twitter save for a form acknowledgement the complaint had been received and that anybody could complaint to Twitter.

Assistant Attorney General Adam Hornstine argued, Twitter is a private company, which means it can't be charged with First Amendment violations for deleting tweets or suspending users. He added that the fact that Twitter suspended Ayyadurai's account again earlier this week even though state officials had not said a word about him proved that the company is not under their thumb and makes its own decisions about what to allow on its platform.

Also, Twitter never even deleted the tweet the Secretary of State's office asked it to consider deleting but instead ordered him to take down four other tweets, in which he allegedly posted copies of e-mail correspondence with a lawyer in the elections division.

Michelle Tassinari, an attorney with the elections division, testified she felt the tweet was particularly egregious not just because it was plain wrong, but because it could make people doubt the integrity of elections in Massachusetts. But she said nobody from her office ever talked to anybody at Twitter about the tweet and their sole communication consisted of a form complaint submission and an automated reply from Twitter that it had been received.

However, Wolf said he was inclined to side with Ayyadurai that at least for the purposes of issuing a temporary restraining order, that while Twitter may be a private company, Ayyadurai made a good enough case that was acting in concert with the Secretary of State's office, which means the First Amendment comes into play because the Secretary of State's office is obviously a government agency.

Wolf said that even if Twitter didn't make Ayyadurai delete the tweet the state objected to, it made him delete others and that the candidate had made a good enough case that the state's form submission put Ayyadurai "on Twitter's radar screen," which might not have happened with a complaint from some average user. In fact, it might even be a form of "prior restraint," which, as the Pentagon Papers case showed, is "almost always invalid," he said.

Wolf began reaching this conclusion after hearing testimony from Debra O'Malley, who runs the elections-division Twitter account. O'Malley said that after receiving a request from a division attorney to file a complaint about the tweet, she logged into the division Twitter account and called up a complaint form in which she wrote that his tweet was harmful misinformation because the state did not destroy any ballots, that every single primary ballot was sealed and put into storage for the federally mandated 22 months.

Wolf asked why she did that rather than replying to Ayyadurai's tweet with a division tweet showing just how wrong he was. "Because I don't want to amplify misinformation," she said.

That proved to be the wrong answer to give to a judge sitting under a portrait of Louis Brandeis. Wolf paraphrased the Supreme Court justice's famous statement in one Supreme Court decision that "the answer to bad speech is better speech."

Galvin's office should have replied to Ayyadurai's tweet, instead of filing a complaint, he said. "We wouldn't be here if the response had been a tweet" explaining how the state has not destroyed ballots but preserved them under federal law. Let the marketplace of ideas decide if Ayyadurai is "is not a credible person, we don't want to vote for him." And, even if Ayyadurai is wrong, "The First Amendment protects false speech as well as speech that describes things accurately, this is basic First Amendment jurisprudence in a new age."

"Twitter is like a megaphone, it amplifies somebody's message, but it's his message," one that government shouldn't try to censor, even if just through a complaint form available to every other Twitter user, he said.

He added that in the future, the Secretary of State's office should "answer false speech with true speech and expect it will prevail in the marketplace of ideas, which is perhaps an antique idea, but one I believe in deeply."

After a 15-minute break, the Secretary of State's office agreed that, in exchange for Ayyadurai dropping his request for a temporary restraining order, it would agree between now and the morning after the election not to send Twitter any complaints about him, that it would ask the National Association of State Election Directors to do the same, and that if it did have any issues to raise about Ayyadurai's tweets between now and Wednesday, it would answer them publicly on Twitter.

Wolf said he would set a date some point after the election to see if Ayyadurai wanted to continue his case. And then he concluded the hearing, saying the elections-dvision officials "can get back to their important work" and Ayydurai can get back to "the important role he's playing in our democracy."

If they can't then I will report his lying tweets instead.

Sad and bizarre are the businesses that actually put up signs supporting the fellow claiming to have invented email.

Memory can be a long thing. I'll decline to shop at places owned by folks who supported this brilliant MIT graduate. But then MIT had no problems with accepting money from a convicted sex offender.

After all money is money; who needs morals to be part of the package.

This guy just needs to go away. There’s absolutely nothing good about him.

They aren't both important

I wish people would stop pretending that exercising free speech is necessarily a good thing. It is, and absolutely should be, protected. People should definitely feel safe to speak there mind, but there is no reason that anyone should give Ayydurai more than the time of day.

He's a leech sucking the blood of democracy. Part of democracy is letting him do that, but we don't have to like it.

Well-Educated, but a Nutcase.

In March 2018 he was unceremoniously tossed from the St. Patrick's Day breakfast at the Ironworkers' hall, when he showed up uninvited, with his "phony Indian" billboard. Although the sentiment may have been somewhat popular, one doesn't insult a guest (Sen. Warren) at someone else's gathering.

I just checked Twitter and he hasn't posted in the past 5 days.

He has several older posts that would be reportable, but I'll wait and see if he comes off of suspension on Monday.

Frankly, I think he should be reported for his handle ('inventor of e-mail' my shiny metal ass, Xerox PARC prior art), but that's not actually against Twitter's TOS.

He got a five-day suspension, which runs out either today or tomorrow, earlier this week. He claims it's because he tried to post again about the Secretary of State befrauding him.

During the hearing, the state argued that this latest suspension is proof Twitter is not under its thumb, because nobody from the Secretary of State's office has filed a complaint with Twitter beyond that one complaint back in September.

But the judge seemed inclined to side with Ayyadurai, and argued you could see this as a form of prior restraint which, at least for now, is still considered unconstitutional - that that initial complaint put him on Twitter's "radar scope" and that that would not have happened otherwise.

Me, I wouldn't know whether he's posting or not, because I found out when I first started writing about this case that he's blocking me. It's simple enough to get around that, sorry, Mr. I Invented E-Mail, by using another browser (which is how I got the screen capture of the tweet in the story), but I don't have enough desire to waste my time reading his tweets normally.

Should our current President win again he'll have to restock his current cache of rouges and scoundrels. Anyone who can make a claim that one million votes were destroyed with no evidence would fit right in.