Allston's GAP student warren could get 17 floors of neighbors 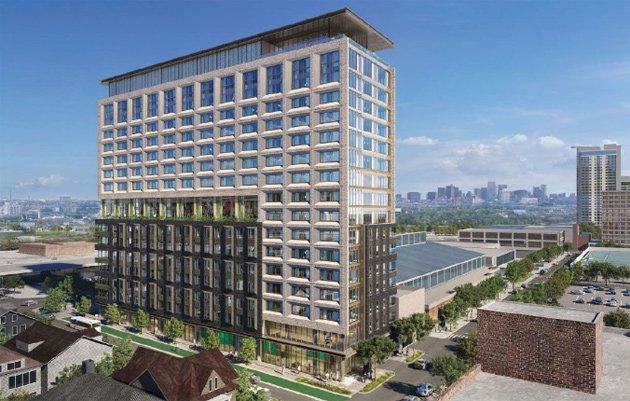 City Realty, which is already working to remake the intersection of Harvard Avenue and Cambridge Street, today filed plans for a 17-story, 254-unit building with small apartments on Ashford Street at Malvern Street.

The company's proposed $104-million building would replace a one-story warehouse.

It would tower over the Gardner/Ashford/Pratt area of houses that in the before times were tightly packed with BU students on one side and BU on the other.

The building would overlook the now abandoned CSX rail yard where Harvard one day hopes to build a new mxed-use development that would include a new transit station. City Realty has pledged to set aside much of the site for access to the proposed West Station, including enough land for two bus lanes, dedicated bicycle paths and sidewalks.

CIty Realty has proposed construction under the city's "compact living" pilot program, which lets it offer units smaller and provide far less parking than what would normally be required by city zoning - and provide far, on the theory this will mean reduced rents. In exchange, the developer has to provide "amenity space" in the building, which in this case would involve a series of open spaces for residents to congregate, get to know each other and work from a space other than their apartments, City Realty says. The company adds that because of the pandemic, it has come up with a design for more, but smaller spaces to reduce potential crowding in any one spot.

The developers are proposing a wide variety of unit sizes and styles for the building, which will help to accommodate Allston/Brighton’s diverse and growing population. The units will be comprised of a mixture of studio, one-bedroom, two-bedroom, and three-bedroom units. Additionally, various common amenity spaces and semi-private amenity spaces are being proposed, which will allow future residents opportunities to both gather and connect with neighbors and friends and have a space to work remotely or study in within the building, but outside of their individual units.

The concierge-staffed building would have 63 parking spaces. City Realty says that in addition to the proposed West Station, the building is within walking distance of the Green Line and several bus lines, along with all the amenities that Harvard and Commonwealth avenues have to offer.

The company added it rejected a glass-tower design, in part as an homage to the surrounding neighborhood, in part to avoid blinding nearby motorists and pedestrians at certain times of the day:

Regarding context and building aesthetics, we believe this design captures the spirit of contemporary design but also respects the materials and craftmanship rooted in the neighborhood. The antithesis of a ‘glassy tower,’ we are proposing a modern building clad in masonry for the majority of surfaces. This is not only an aesthetic consideration, but a sustainable one as well. Reducing the glazing on the east and west sides of the building reduces energy loads and helps control glare for pedestrians and drivers.

City Realty hopes to break ground in the spring of 2022.

The view from Malvern Street: 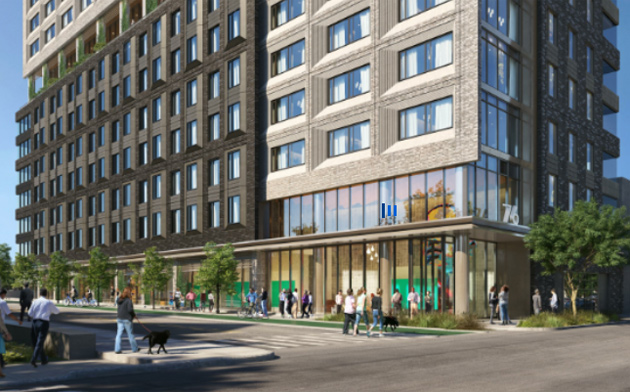 Amazing and looks cool. Though the neighbors will probably demand it be turned into a nondescript brown box and then everyone here will complain about how boring the design is.

Reduced demand for the GAP area would be a great side benefit.

Along with a handful of other

Along with a handful of other developers, the City Realty folks seem to have a lot of faith in the idea that Boston has an endless market for relatively affluent residents who are able and willing to pay over $2500 a month in rent for a 1br. They must know something I don’t.

Not a complaint; I actually like that project’s description overall and if increased supplied is supposed to lower the rent, all the better.

when the increased supply draws more people to the area and starts, as you say, at such high prices to begin with.

just look at East Boston, particularly Jeffries Point. How many hundreds of new units over the last 10 years, and rents are higher than ever.

I get ads for luxury places

In my Facebook feed all the time. The Beverly over by the Garden popped up last week.

Every time they do, I laugh, and then propose my standing offer for a studio: $900 a month, and you have to throw in parking. This is because I pay $785 a month with parking now. Granted, it's well short of the $1,850 that they seek, but, as always, let me bend over and (expletive) it out for you.

Even their own website admits that you need to make $72K a year to live there. I'd be thrilled if I could get a job which paid half that. Maybe someone should hire me to buy ads for them, because they couldn't possibly be getting worse service than they are now from Facebook, who saw fit to include me in this misguided realtor's buy.

and they can't get anyone to pay that rent, then the price will have to drop so they don't take a total bath on it. So better to build vs the alternative.

It's not like Boston doesn't have a lot of tiny apartments already, back from the days before zoning tried to upscale everything.

Design is really nice. Fits in well with the BU towers.

In before the comments about height and shadows. If anything we should push for more height along the pike to buffer the neighbors further north and south.
Hopefully the pike straightening happens sooner rather than later so whoever lives there will look on something other than a rail yard.

Creating a connection point is huge. This area has needed something better than the B line for a long time.

Hopefully, they build a station platform here sooner rather than later.

LOL for what this will do to

LOL for what this will do to the (alread overburdened) B line should West Station not materialize.

Our elected leaders have universally failed us. This pandemic would have been a perfect time to get infrastructure work done. Get people working while fixing out roads, bridges, and tracks -- all while the roads and rails are largely open with people working from home. The political will would have been there to issue bonds to pay for this work if it propped up the economy (see Tennessee Valley Authority and other new deal programs, etc)

Smaller may not help the rents

They will charge as much as they can. The city's "pilot" program has been going on for a while, and so far the BPDA has not provided evidence it is working. How about some quality of life? How will these buildings hold up ten or twenty years from now? I would rather it were a BU dorm. That would really relieve pressure on the housing market.

They are clearly building this with the idea that this will one day be a gateway to the new neighborhood where the train yard is. Sounds like they will mostly fill this with students, which in that area is normal. Build it.

or is that Buddy, or Brian.

One phrase leapt out at me

The city's going to let them build teeny tiny apartments "on the theory this will mean reduced rents"? They're just going to sit back and trust a realty company to be moderate and thoughtful when it comes to charging money? Oh, bless their sweet innocent hearts.

After the pandemic has settled there will be a lot more students in the area and we'll need somewhere to house the growing population.

Street parking must be forbidden for residents of new bigger buildings, to preserve it for existing residents who likely live in smaller buildings or even houses with driveways.

State to test various ways to remove bad plants, restore the banks along the Charles River
Allston party ends when woman falls off second-story balcony
Building with 120 apartments proposed on Braintree Street in Allston
Citizen complaint of the day: Pursued by a snarling hellbeast across the desolate plains of Lower Allston at midnight
Board rejects conversion of Allston laundromat into an apartment after nearby tenants express concern about where they'd wash their clothes
Allston hotel that once served warm cookies at night to foreign-dignitary guests was unprepared for the sort of guests attracted by bargain pandemic rates