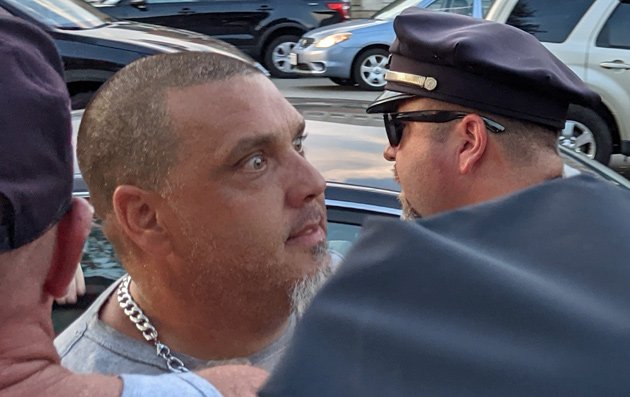 Stephen DeBerardinis being pulled away from protesters he was trying to punch at West Roxbury rally earlier this month.

A federal grand jury has indicted a man who lives on the Hyde Park/Dedham line on charges of sending racially offensive Facebook messages to a White woman who'd just announced her engagement to a Black man and of threatening the couple with dismemberment.

DeBerardinis, who lives in his mother's house, was a prominent participant in a "Back the Blue" rally in front of the West Roxbury police station earlier this month, at which police had to pull him out of a scrum with protesters after he tried to punch some of them. He responded to Universal Hub coverage of the event, which included two photos of him, with e-mail threats to "COME FOR YOU HARD HAHAHAHAHAHA."

According to the indictment, filed yesterday in US District Court in Boston, DeBerardinis felt compelled on Jan. 6 to use Facebook messenger to send racial epithets to a White woman who had posted photos on Facebook of her and her newly engaged Black fiance. The indictment says that DeBerardinis did not know either the woman or the man, but saw the photos because he was Facebook friends with some of the woman's friends.

The woman showed the messages to her fiance, who used her Facebook Messenger account to try to call DeBerardinis. He did not answer the call, but replied a minute later in text: "DON'T FUCKING CALL ME!!!!! YOUR WHITE TRASH AND A DIRTY COCK SUCKER."

Not long after, he allegedly sent the woman another obscenity-laden message, to which she replied, "Don't worry, I'm reporting you to the cops." According to the indictment, he replied with: 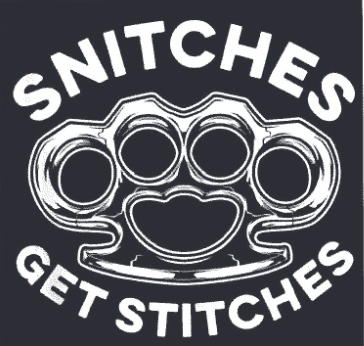 The couple told him to leave him alone and that repeated that they were reporting him to police. DeBerardinis continued to message them:

"Read up more on me lol ... you will see how me and my crew burn niggers alive," followed by "And white whores like you well.... get rape and killed THAN we cut off body parts and mail them to your family lol."

Obviously his allegedly pro-police buddies didn't invite him to the big party in DC...

He wanted to atone for the J6ers actions by proving that “Back the Blue” rallies are totally about the community supporting local police and has nothing at all to do with anti-black racism and white supremacy. /s

this guy a paraprofessional at a local public school?

I'm starting to think that Vladimir Putin is "correct," not morally of course, but he is clearly correct at what will be America's undoing and how easy it is to irrevocably tip our fragile scales. All he had to do was sit back and let the market do its thing; I don't think any of this is good, but if you build a country and an economy on killing all the natives and enslaving Africans it is a karmic time bomb. The irony is that it is NOT a case of the victims rising up and perpetrating the evils they once faced--rather it's the same old disturbed whites who are at it again.

I have never been in an apocalyptic end-times war before, so I don't know what to expect. BUT, it does seem like it will be the kind of thing you can root for from home at least during the long pre-season.

The mainstream media took a turn last week with most major networks focusing on projecting fear about the limitlessness of republicans. How come they only do that intermittently? Too busy going along to get along?

Believe you're thinking of....

Donnie 'Punchy' Palmer, who was last seen on Facebook, musing about a run next year against Ayanna Pressley.

Who was also at the E-5 rally

And he provided just the right tone to get the fighting, such as it was, started.

Mr. DeBerardinis is a former computer networking technician turned lightweight weapons salesman, at least according to his LinkedIn pages, online "shop" (which I put in quotes because you can't actually buy anything online from it) and the T-shirt he was wearing at the E-5 event.

He announced on Facebook last night that he will indeed run against Congresswoman Pressley.

We're up to a Pressley, Palmer and Owens race now? UHub should host a debate between them...

That’s a lot of

“economic anxiety” he’s got there

This guy is a menace

And not just to the English language.

I hope you reported his threats against you as well? Make sure the DA has plenty to work with...

I filed copies of his e-mails at E-5.

are especially threatening when wielded by an Internet Tough Guy / Mighty Keyboard Warrior who can't land a punch in real life.

That's no way to talk to Curley from the 3 Stooges.

Please tell me again how this whole "Blue Lives Matter" movement is nothing but a group conceived to counter perceived anti-police messaging in the media and was never racially motivated nor hijacked by white supremacists at a later date who use the supposed cover of police legitimacy to further their agenda.

Or perhaps it's just a bunch of losers living on the outskirts of town who'll use any opportunity to join a mob and act out on their racist dreams while under the constant negative influence of social and opinion media. Or both, I don't really know.

People are born black and cannot escape it - nobody is born blue!! No one has blue skin that they can’t escape. It’s a free choice of profession, you can quit law enforcement and get a new job any time!

The lost past participle

I don't think they teach the past participle in schools anymore. Not just this clown with his "and white whores like you well.... get rape". It's widespread. I see signs with things like "please keep this door close" on them on a somewhat frequent basis.

It's a common expression

"Keep your door close, and your enemy's door closer."

Surprised you didn't catch that.

What is it about “back the blue” that attracts these friendly people?

Probably bc cops are cut

Probably bc cops are cut from the same cloth

Of course they "back the blue"

But its all "snitches get stitches" when their bullying threats are reported to the people whose job it is to police their asses.

"Back the blue" when folks are protesting against racist policing patterns.

"Stitches get snitches" when folks are suggesting police should intervene against racist terrorists.

Looks like he has taken to selling mall ninja grade knives in Raynham of late?

I found mention of an arrest for using stolen credit cards to try to buy guns. But I didn’t see any info about what happened in that case.

Judging by the fact that they

Judging by the fact that they are black powder guessing a previous felony somewhere along the line.

This is a perfect example of...

Back the Blue with its mask off. Also, nothing says "we respect law and order" like the phrase "snitches get stitches."

In this case, Pity the Police as well as the Victims

who have to deal with this whack job. The bulging eyeballs are a symptom of one or more medical conditions.

And he seemed so nice

Is Eddie missing one?

At first I thought this was one of the Andelman brothers.

... when racism was not accepted? Wait. That time never existed?
{crawling back into hole with teddy bear}
Peace/out

Looks like he's still living at Mom's house at 44.

He is living at his mommy’s house in a very tough way.

Does this fine citizen back the blue while being arrested for his hate crimes, or does he call them fascist thugs?

This guy is a real piece of work

"Stephen DeBerardinis, 45, who lives in his mother's house..."

Hehehe.. wonder if he and his "crew" meet weekly in his mother's basement. However, if this all works out, I suppose he'll be moving out soon and have new roommates. Moving on up.

Former Hyde Park sub shop could be reborn as sit-down restaurant with breakfast
Police: Four people collapse after snorting fentanyl in Hyde Park right after buying it; dealer was still on scene
Historical marker on Hyde Park Avenue bears witness to a lost age
One of the men shot in Hyde Park triple shooting to be charged for all the guns and ammo police say they found in his home
Monsters now greet you as you enter Cleary Square
Three people shot on Rosa Street in Hyde Park; that's six people shot across city within a half hour