Tonight on Roslindale Avenue, I found this egg on the sidewalk and assumed it was leftover from Halloween. I have a young daughter who would find something like this really alluring, so I picked it up to see what was in it. 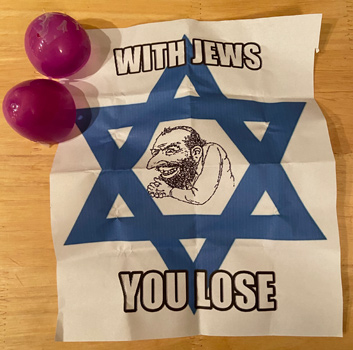 This comes a month or so after somebody went around Roslindale tossing anti-Asian, anti-Wu eggs around the neighborhood.

Neighborhoods:
Roslindale
Free tagging:
Antisemitism
Ad:
Like the job UHub is doing? Consider a contribution. Thanks!

oh no that sucks

oh no that sucks

Most outright anti-Semitism in our parts these days is from the progressive left. Not hard to find evidence of it. This is quite suspicious to me considering where it was found and how it was publicized.

Can someone show this coward where to donate to the local food pantry,volunteer at the local schools and realize there is self satisfaction in other capacities.

that sure sounds like utter, laughable bullshit to me. My long anecdotal experience of anti-Semitism in America is that it overwhelmingly comes from the right, as it always has.

We all know that the favorite, lamest, most transparent tactic of right-wingers is to project their ugliest sins onto their political opponents. It's the default move for unimaginative, anus-mouthed dullards like the Orange Turd. "No, *you're* the racist!" That level of playground rhetoric barely rates a Logan Roy "Fuck off" these days.

Let's see the evidence you deem not hard to find. Put up or STFU. It had better be more than a chip or two, because I'm going to raise you with a shipping container's worth of rightie hate-chips. My advice is to quietly fold while you still have a shred of dignity.

If I had to guess, I'd say their next move would be to conflate criticism of the government of Israel with anti-Semitism, possibly with a side of "did you know the Nazis were socialists?"

that Hitler purged the party leaders that actually believed that "socialist" part?

Mustn't be bringing up inconvenient facts.

Did you know that Hitler

Did you know that Hitler literally killed the Nazi leader?!

Being opposed to Israel’s

Being opposed to Israel’s human rights violations doesn’t make you an anti-Semite.

Not wanting to unconditionally fund the Israeli ethnostate's military incursions to the tune of 3.8 billion dollars every single year is not antisemitism.

Most outright anti-Semitism in our parts these days is from the progressive left. Not hard to find evidence of it.

If it's not hard, why aren't you giving us some evidence? My guess is that you don't have any, because you're making this up.

Well one example is when

Well one example is when Sunrise Movement rejected attending a rally because a bunch of Jewish groups were in attendance...

That's not a citation

Give us references! Be the bibliography you want to see in the world.

was that there was more anti-Semitism coming from one direction than another. A single example doesn't prove anything about that claim at all.

They were Zionist groups, and this was an action taken by one chapter. It was not a decision by the Sunrise Movement, and they were not "Jewish groups" unmarked by any other, more salient characteristic. But I suspect you knew all that.

"how it was publicized"

Most outright anti-Semitism in our parts these days is from the progressive left.

Please try not be a complete fucking idiot. I know it's hard, but I think you can do it.

Most outright anti-Semitism in our parts these days is from the progressive left.

Progressive leftists did not chant "Jews wll not replace us"

...in Charlottesville, or blame wildfires on Jewish space lasers, or accuse George Soros and "rich Jews" for non-existent child trafficking, or shoot 4 people in the Chabad of Poway CA, or murder the guard at the Holocaust Museum, or murder 11 people at the Tree of Life synagogue, or murder 3 people at a Kansas Jewish Community Center.

You bring out the worst in people. Youve radicalized me into a raging anti-Magoo-ite.

WITH MAGOOS, YOU LOSE

Oh my god I love you

Adam (Gaffin), is there a way to add an "award comment" function to this site like Reddit has? I would give AdamB so many awards for this amazing invention.

Adam, please do not listen to anyone who ever says "please make this place more like Reddit".

I'm going to ask that folks who want to talk about supposed anti-Semitism by elected officials talking about Israel go find some place else to do it.

First, opposition to Israeli government policies is not by itself anti-Semitic. Jews are not a monolith, and the State of Israel does not speak for all Jews, no matter how many times Orange Mussolini or Nikki Haley say it does.

Second, as a Jew myself, even if I thought Ayanna Pressley was anti-Semitic, which I don't, I wouldn't be worried about her coming after me with a gun or traipsing around Roslindale (half of which is in her district) tossing plastic Easter eggs filled with crap into people's yards.

There is, however, a long history of right-wingers in this country going after Jews (from Leo Frank to the Tree of Life). And they just love spreading anti-Semitic canards (Henry Ford).

I could go on, but let's try to keep the discussion to the fact that somebody is tossing anti-Semitic eggs around Roslindale, not what some members of Congress feel about Palestine. They're just not the same.

Universal Hub:Let's not talk about supposed left-wing anti-semitism. Now that that's out of the way, let me point out all the right-wing antisemitism.

Universal Hub:Let's talk about the subject of the news article. Now that that's out of the way, let's not talk about insane right-wing fantasies

Fixed that for you.

Adam outlined the *all* of right-wing antisemitism? That's all of it? I'd have guessed there had been more than 3 occurrences in total.

I assume that Adam has other

I assume that Adam has other things to do today, this week, this month, and this year.

make a claim then

let’s hear about all the “left-wing anti-semitism” Adam isn’t posting about.

I never said there was? I'm not Terrapin.

In fact, I was among the first to confront Terrapin's claims up above.

I never said there was? I'm not Terrapin.

In fact, I was among the first to confront Terrapin's claims up above.

Adam literally stated in the 3rd paragraph that he is more comfortable with antisemitism if it's coming from the left.

Each time, I don't reach the same conclusion you did.

You'll have to take that up

You'll have to take that up with whoever was charged with educating you. Personally, I worry about antisemitism regardless of who says it. In fact, taking Adam's specific example, I'd probably be more worried about the antisemetic elected official than the antisemitic crazy plastic egg guy regardless of the political affiliations.

does gun-toting antisemite hunting Jews fall on your worry scale? Or are you just ignoring that part of the paragraph that has you so concerned?

In Roslindale Square battle between parking and affordable housing, parking wins
Michelle Wu's other first: First mayor to live in Roslindale
Fire breaks out in Roslindale house under renovation
House in Roslindale near golf course catches fire
Southern parts of Boston not being invaded; it just sounds like it
Roslindale has a font of its very own