Droughty: You can now wade across the Charles River and not even get your knees wet, at least along one stretch 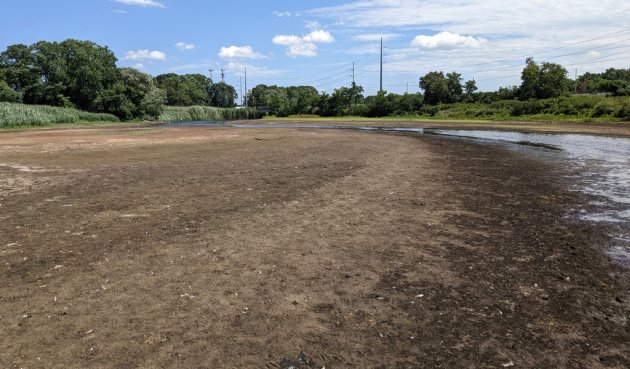 All that brown is normally river bottom. See it larger.

The level of the Charles River where Millennium Park in West Roxbury meets Cutler Park in Dedham and Needham is now so low that somebody who doesn't mind getting their calves wet - and maybe sinking into some mud - could easily wade across at its narrowest points. 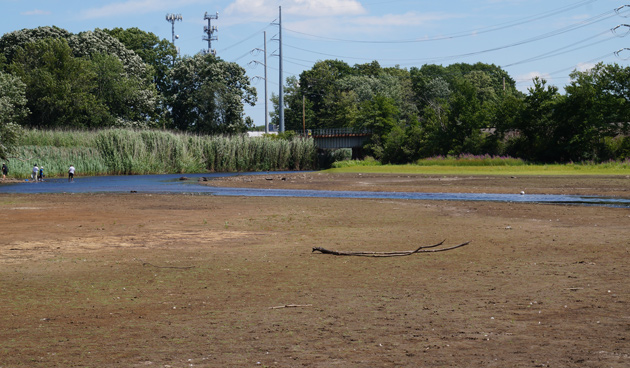 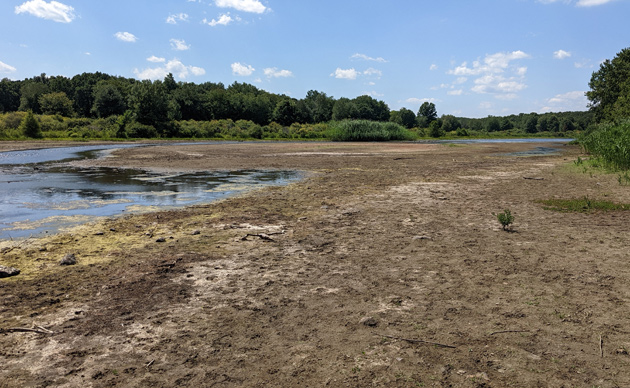 The river, never very deep in this stretch anyway, has receded so much in the current drought that wide swaths of former river bottom are now covered with new land plants, water lilies struggle to survive in mud - some are still managing to put out flowers - and everything from mussels and snails to old tires now lie exposed to the bleaching effects of the sun. With so little water flowing through this section of the river, all it takes is a stiff breeze to seemingly reverse the river's course. 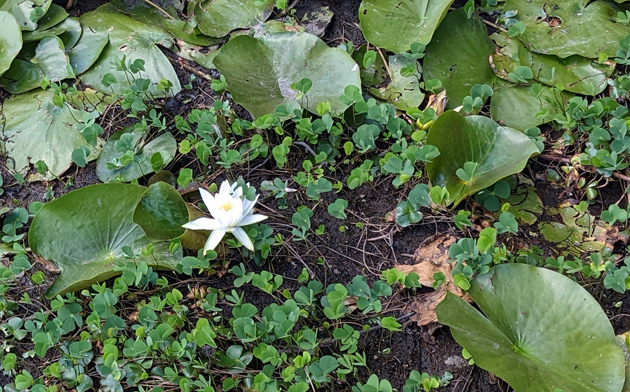 The shrunken river, and the ability to walk on dryish land that would normally be underwater, is good for bird watchers: Herons, egrets, ducks, geese and other birds all made appearances this afternoon:

An egret walks across the river: 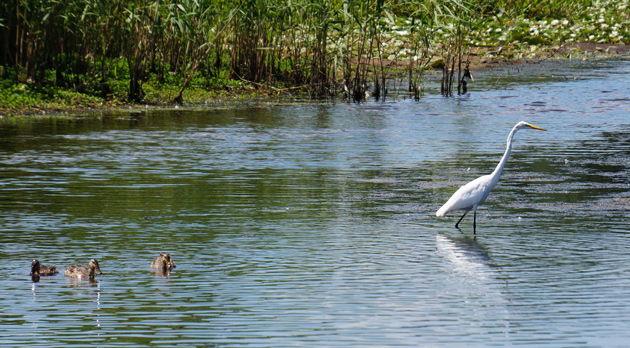 Heron next to what would normally be an underwater rock: 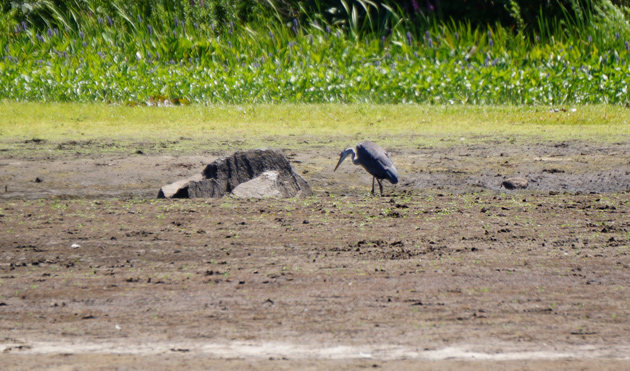 Shore bird in the middle of where the river used to be: 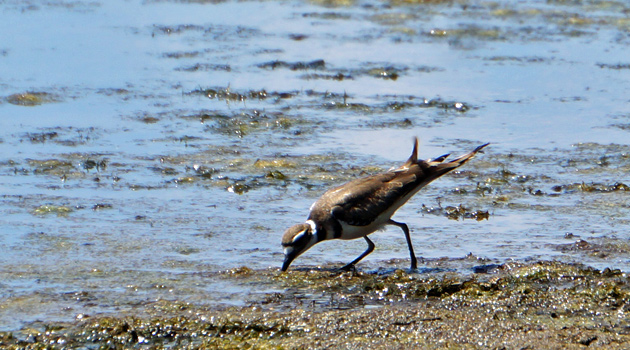 The receding waters have left fresh-water bivalves and snails to dry up in the sun: 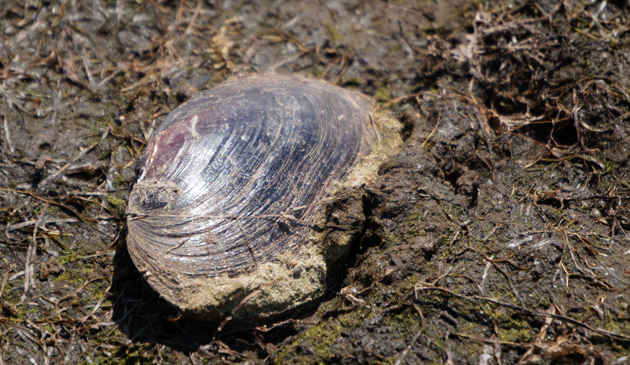 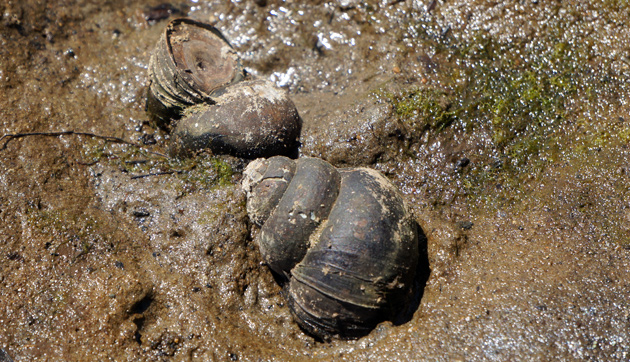 Sawmill Brook, which normally flows around one side of Millennium Park into the Charles, is now just a series of shrinking little pools: 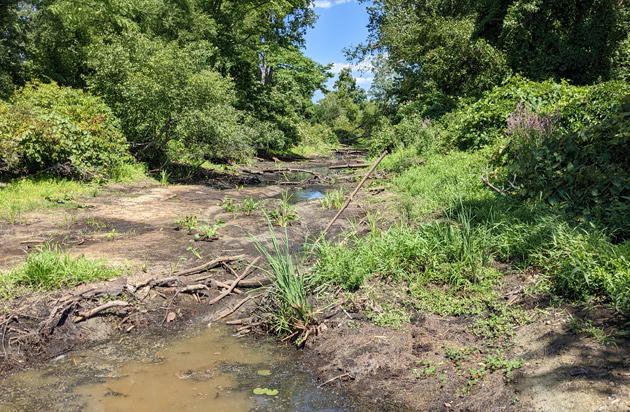 The Charles normally reaches to at least the last step at the boat launch: 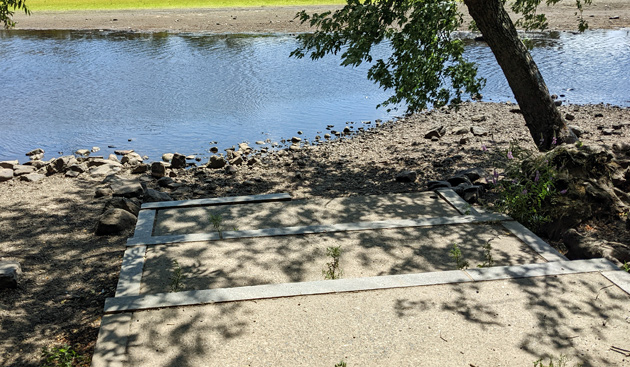 Some kind of structure, likely left over from Millennium Park's days as the Boston landfill, now juts above the water that normally covers it: 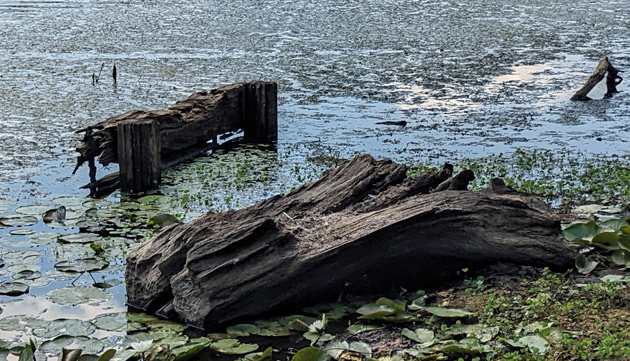 A bit further upstream, at the dam that lets Charles River water flow into the Neponset, a water-level gauge shows the dropping river, in shades of rust and river deposits: 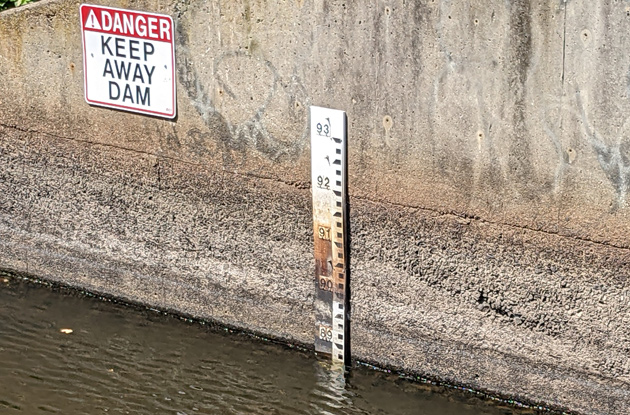 And further upstream from that, at Wellesley, a USGS graph shows the drop in the amount of water flowing in the Charles:

The top of Millennium Park is also showing the effects of the lack of rain: 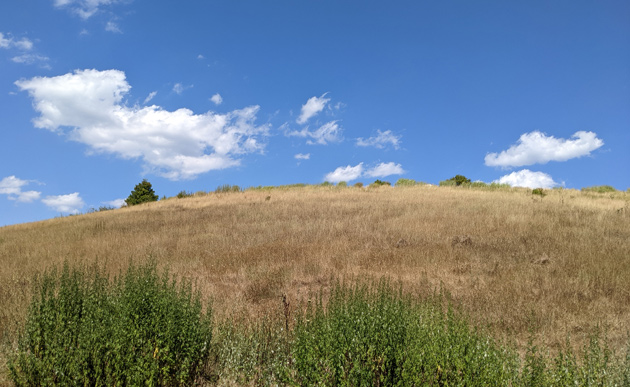 Which is probably just as well.

Probably found them all earlier.

Structure is the canoe launch

The American Society of Landscape Architects has a good picture of it in their slide show of the park. https://www.asla.org/guide/site.aspx?id=39818

Years back, I let my big dog wade into the Charles there when it was quite low. Two canoes come along with the canoer's trying to keep paddling around the sandbars. To their great surprise and laughter, right in the middle of the river a dog starts to approach them! Their laughter seemed to have made him realize that those odd things were "just people" and he stopped his approach went back to smelling the disgusting muck.

Wish I had had a cell phone then for a video of that!

No, it's downstream (downmud?) from the canoe launch

The overgrown steps that usually end at the water's edge in one of the photos above are the canoe launch, and are off the first left turn you can take as you enter the woodish area from the parking lot.

To see the rotting wooden hitching-post thing (or whatever it is), you have to go back to the main path from the canoe launch, then take the second path off to the left, which wends along the river and the Planet of the Apes-style remnants of the end of the world (OK, actually remnants of friezes from Mechanics Hall, which came down to make way for the Prudential Center) and then, when the path bends 90 degrees to the right, there's a smaller path to the left that brings you right to where the river used to be, and you can get a look at the wooden structure.

I got the picture captions mixed up. But thanks for the directions, I'll have to check it out

The news you need to know

This is one of my regular kayaking stretches. I was thinking of going there this weekend, but wondered what the water levels were like. Now I know.

It's always shallow, but usually that just means that you need to do some work to find the channel. It can be fun, but also boring after a while. This looks more like get-out-and-walk. I've never seen it this low before.

There's a USGS monitor near where Adam posted about. You can find it on their new dashboard here:

When the river gets this low

can the dam be adjusted to *not* send any of the little water that remains into Mother Brook?

can the dam be adjusted to *not* send any of the little water that remains into Mother Brook?

If it's a regulated flow and doing so would dry the brook, possibly not. On larger dam-controlled rivers, there is a requirement enforced by FERC (which regulates dams) to maintain a "fish flow" sufficient to support species that live in that waterway. For a brook? Probably not regulated, but not a good idea to dry it entirely if it's at all avoidable.

This is because the Dedham Westwood Water District is sucking all the watershed dry. The river species aren't all dead because of this year, but because of decades of refusing to connect to our wildly sustainable and plentiful municipal regional water availability via the MWRA.

It's idiotic. It's time for the legislature to mandate these communities stop needlessly murdering a major regional watershed and join the MWRA.

The shameless lie that this is due to a drought is a special kind of BS.