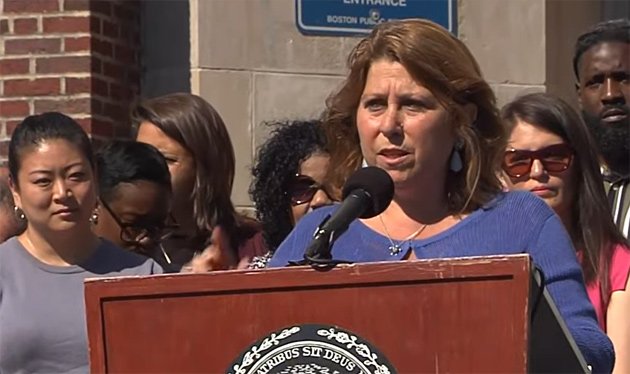 Skipper talks in front of TechBoston Academy, which she helped start.

Newly named BPS Superintendent Mary Skipper says she will work to create a school system where students, teachers, parents and Boston's vast array of world-class institutions work together to create a system that ensures a quality education for every student.

"We need every Boston public school to be a place where students run into the building, where they are thrilled to be there," Skipper said at her first Boston press conference, in front of TechBoston Academy in Dorchester, where she was the founding headmaster in 2002.

She said her day-one priorities are those identified by the state Department of Elementary and Secondary Education, which only this week decided not to take over Boston schools: Special education and English learning, transportation and the state of school buildings. She said that half of BPS's students are either in special-education or English learning programs and that any work bolstering educational programs will be for naught if school buildings are in bad shape or if students can't get to school if their bus doesn't come.

She said that she also vows to work to both increase community and family trust in BPS - which she said already has "immense talent" among its teachers and staff.

"We need it to be a place where our families trust that what we say we're going to do, we do," she said, adding that also means honesty when it comes to problems BPS runs into.

And she vowed to work with the city's colleges and other institutions and companies to become part of the BPS "village" and to help improve the education students get. "This is Boston!" she said.

My experience says ‘too bad’

I was part of a parent group who had an up close & personal experience with Ms. Skipper when our school was looking for a new principal and she was the lead person for ‘Court Street’. She gave parents lip service and then supported and put forward the candidate who was last on our list (under the category of ‘do not recommend’).
The new principal lasted 2 years before moving out of the city to take a top-level job as an individual contributor in another district.
And during the principal’s 2-year term, the principal never attended any after school events except the two parent-teacher nights.
Poor choice and the students suffered for it. And we said so before the selection process was completed.
Let’s hope Ms. Skipper has better sense this time around.

And during the principal’s 2-year term, the principal never attended any after school events except the two parent-teacher nights.

Maybe they were busy doing their job instead of giving parents a case of the warm-and-fuzzies by attending after-school events? But I do agree, parents often gravitate to the worst candidates. Happy our system puts power into the hands of experts!

That is part of the job

Engaging the whole community is part of a principal's job. Schools thrive with an engaged community. And it sends a message to the students as well. If you can't show up for the kids at their celebrations will you be there when they struggle?

They kept her for 7 years.

Time was, you could rent an apartment, then grab some donuts for the celebratory road trip in your Chevy Vega
BPD captain who had been on paid leave for more than two years cleared of most charges
Rats running amok through Boston; residents, councilors demand action
No matter where on earth they roam, people will know Boston is their home
Court to Quincy: Boston can rebuild its bridge to Long Island
All diseases skillfully treated