As word spread of the queen's death, a steady stream of well wishers bearing bouquets of flowers did not descend on the local British consulate 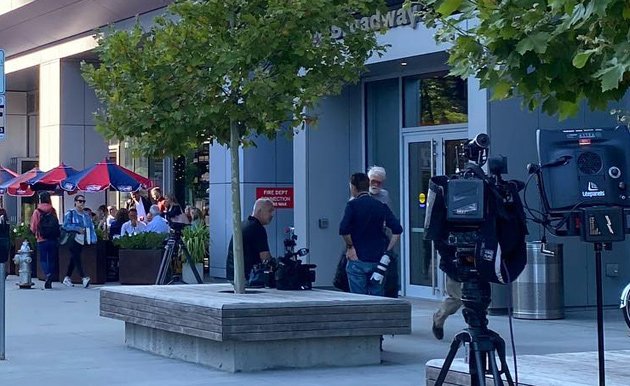 Chris Devers went to see the developing scene outside the British consulate at 1 Broadway in Kendall Square this afternoon - only to find some people eating at the cafe there and a number of Boston news photographers waiting around to see if someone, anyone, would show up to pay their respects.

Perhaps people have chosen to mourn in private in their own authentic way, rather than the "showing up in public places vaguely associated with the deceased and leave flowers and impromptu memorials" method which reached peak popularity in recent years. Also, I think people kneeling in religious postures in front of the Capitol, a GOVERNMENT building, when Ruth Bader Ginsburg died, may have put people off the practice.

they're travelling by bike

they'll be there by tomorrow

Probably won't make it - most

Probably won't make it - most likely mowed down by a car.

You mean travelling by car

Bikes are by far the fastest way to get around the city.

I mean, if there was one

I mean, if there was one single place on this planet that she was most emphatically _not_ queen of, it's Massachusetts. We settled that a long time ago.

I was busy sending champagne to the Irish, Kenyan, Indian, Pakistani, and Nigerian consulates.

On a side note - Attention Boston news outlets - Stop with this fawning coverage of a person who "sacrificed" so much in her life. She was a rich girl who became richer, put the cops on the black guy her sister was dating, paid off the underage women who were raped by her son, and gave a medal to the commander whose unit shot civilians in Derry in 1972. She may or may not have had her ex daughter in law knocked off too. Just saying.

I did not have the same pile

I did not have the same pile of receipts at hand that you apparently did, but I was thinking this morning of all the times she could have done good by making use of the fact that she has the ear of hundreds of millions of people, and speaking up.

Oh, of course, someone is going to point out now that for some time it's been the tradition for the British monarch not to get involved in politics. And if there's ever a good reason to keep doing something stupid, it's for the sake of tradition.

...but I was thinking this

...but I was thinking this morning of all the times she could have done good by making use of the fact that she has the ear of hundreds of millions of people, and speaking up.

Oh, of course, someone is going to point out now that for some time it's been the tradition for the British monarch not to get involved in politics. And if there's ever a good reason to keep doing something stupid, it's for the sake of tradition.

I agree to some extent with John (not to the tinfoil billycock extent of thinking she put a hit on Diana), and xyz says it very well above.

The UK and the Commonwealth have been the USA's great ally for decades. She was a steadfast part of that and I applaud that.
I have sympathy for her subjects' bereavement.
I have sympathy/empathy for her messed-up family, that she ran out of time to really set a course to healing.
I think she did improve some in the last couple of decades - maybe she measured some of what she was doing against the way her own mother would have, or Diana.

That having been said...

She was a beneficiary of and family heir to (the fading lights of) an Imperial/Colonial structure that caused extensive cultural and social damage and poverty and violence across the world. It was fading already and she did pieces of helping to usher in a new era, but so many missed opportunities...

All the shit with Derry and Ballymurphy (for example (and that's just the subjects who were closest in pigmentation to the British)). The British government protecting the perpetrators for decades. The injustice.

That's when people pop out and say "She only had ceremonial power! She's the head of state, not head of government! etc...." Bullshit. Some of those are the same people who have been gushing the last 24 hours about how she "led" with such dignity for years. Yeah, she didn't have much actual power - but she had political and personal power. She could have have satisfied her obligations and still made clear her disapproval of actions & decisions (if she actually DID disapprove of them) in subtle and nonverbal ways that nonetheless would get the message out - but she didn't. She could have made of point of praising the people who did the right thing - but she didn't.

Then there's her family. The Firm. The Unit. Whatever the hell they call it. Megxit. So many people were gushing over the Queen the last couple of years (and before then, too, with the whole roster of idiots) about her reserve, dignity, graceful bearing, class, etc...
More bullshit!
They never get [EDIT "around to saying"] how she helped cause it!!! Yeah, Harry and Meg are a hot mess, and they've done their end of this badly. None of which changes the fact that the tone of the family - appearances and expectations and boundaries and limits and duty and media consumption - was set by Elizabeth. She put her family up on the altar block like Abraham did, and unlike Isaac they came out with some cuts. Harry's parents' messed-up marriage? Elizabeth pushed it. Harry's mother's death? Elizabeth helped created the media-consumption monster that ended up killing her. Harry may be a blockhead in how he did it, but how could anyone fault him for wanting to break the chain of this for his wife and child(ren)?

I agree with you

But even ignoring the faults I don't understand American's interest in British politics and royalty in comparison to other places.

The average American probably knows more about the British Queen than they do about the Canadian or Mexican governments despite both being far more important economically, politically, and socially to the US.

How often do we hear about other European royal families?

such as those of Spain, Sweden, Denmark, Norway, or the Netherlands? Almost never.

Juan Carlos was in the news

Juan Carlos was in the news just recently. The statute of limitations has expired and he can visit Spain again.

Well, I know as much about the British Queen as I do the Canadian Queen...

There is a bit of nuance though...

Because the monarchy's support there is waning. I can't imagine that Mr. Mountbatten-Windsor's ascension to the throne will help anything in that regard at all. Support for for the monarchy in Quebec is minimal to hostile, as as demonstrated by tweets from the Mayor of Montreal and Premier of Quebec sending condolences to the family and the British people for the passing of the British Queen, while omitting her role in Canada (there is currently a general election campaign going on in Quebec, so right now, it might not be politically convenient to cosy up to a monarchy that few Quebecers want).

The British government has

The British government has spent decades, and quite a bit of money, promoting the royal family in order tro attract tourists and their money. That may not buy affection or respect, but it has convinced people that the queen and royal family are interesting.

Also, there are lots of Disney movies and children's books about princesses, and kings and queens and princes and threats to the kingdom. All that adds up to make people think that what royals do, and what happens to them, matters more than if the exact same things happened to their neighbor down the street.

Diana was presented in ways that fit the model of "relatively ordinary, except for being young and pretty, woman marries a prince and lives happily ever after," and then we were in Act II, the part we don't get in stories that end with the wedding, where the prince had a mistress he cared more about than about the pretty young princess.

Not that hard to understand, IMO

She was the longstanding remnant of a roughly 1200 year line (with a short interruption or 2) of royals who dominated a large percentage of the world for centuries, including our own neck of the woods, famously. She was the living embodiment of a fairy tale character, a real life anachronism, with all the castles and jewels and corgis, and the star of the longest running reality show we've ever had, the British Royal Family. Depending on viewpoint, she's anything from a benevolent leader to a callous bitch who allowed and dealt out a tremendous amount of misery to a vast amount of people that never had to happen. It would be very out of character if people WEREN'T fascinated with the Queen.

1200 years ago there was no England to be King of, let alone a UK, just Mercia, Essex, Wessex, and so on, a dozen of them or so; and her Norman ancestors, if she had any, were still vikings. Of course she was mostly German, but if we're talking about an "ancient line", we don't want to get into that.

She is a direct descendent of Alfred the Great

Alfred's rein began 1151 years ago, and his house of Wessex, that ultimately unified the English kingdoms, can be traced further back than that. If anything, 1200 years is an understatement.

If you go back the 30-something generations between her and Alfred the Great, she has a few billion ancestors of that generation, which is quite a bit more than the population of the Earth at that time. That's a lot of lines, and a lot of crossing over between them. Are all of them equally illustrious? What special claim does this one have on her, in preference to others?

If you go the other way, Alfred the Great presumably has a fairly large number of descendants. Millions, billions, it's hard to know, but the former Elizabeth Regina II is hardly unique among them.

I just can't comprehend the

I just can't comprehend the fascination with the queen or for that matter Princess Diana.

I opened the windows

And played the Wolfe Tones.

If you understand the context, this could be one of the funniest and most subversive things ever to be put on British TV.

the Tea Party Museum? Perhaps they were flinging some teabags into the harbor in her memory.

Is a very obscure and outdated slang term for British people, and I encourage it's immediate revival.

there would be issues with people confusing it with a bit of similar modern slang...

that Former Westroxer doesn't see a problem there ...

If this happened in Great Britain

It would be a big deal.
Most American will just say .. oh how sad and move on with their life, in my opinion.
Even in Great Britain the Royal Family is losing relevance.

Visualizing some of the Boston area's Black neighborhoods - in textiles
Finally: Harvard Square to get soft-serve ice cream in 'grammable fish-shaped waffle cones
The first Chinese restaurants in Cambridge
Covid-19, Bluebikes and an unreliable T put more people on bicycles, advocates say
By Friday, you'll be sick of turkey so time for a Boston ramen crawl
First responders search the Charles for somebody who may have jumped off a bridge early this morning