Alewife MBTA garage is closed to new traffic; 5 Investigates (broke the story) and other news crews are on scene, I imagine it's almost as good as a snowstorm newscast.

Town of Arlington alerts note that MBTA will be closing the garage over weekend, at least partly closed on Monday, parking at Thorndike field allowed:

They Went That Way

Do you know what it takes to park a train? To create a place to park a train? Are you aware of the almost trivial simplicity of this task? Well, the MassDOT is quite aware that the public (including elected officials) have no clue, and are thus ripe for the type of manipulation which they (and other public transit agencies) have perfected over the last few decades.

Free Ride on the T - 2 Weeks on Fairmount, no charge

In an effort to promote ridership, the MBTA is offering 2 weeks free on the Fairmount line.

The quietly coming along T project 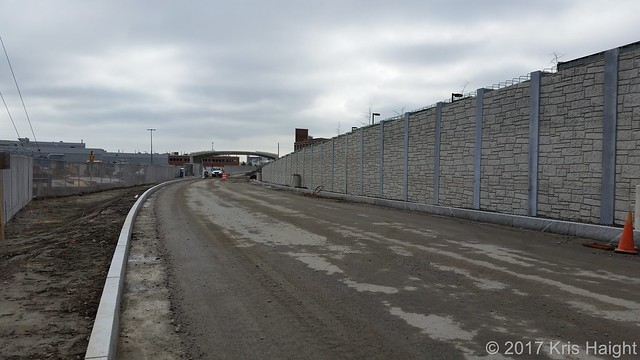 Some of you may not know but I take photographs of the construction of the Silver Line Gateway Project in Chelsea. I've been doing this every month or so since the construction started in April 2015.

However, since I don't want to trespass, my photos are usually taken from public ways and sidewalks. But last Thursday (4/20), I was finally able to get a walking tour of the project with a MassDOT engineer and learn some things about the project. (Read More)

The two rail operators are telling a federal judge they're maybe a month away from resolving a $29-million dispute over the cost of Northeast Corridor service in Massachusetts. Read more.

Are you an advocate for Public Transit? If so, this may interest you. National Conference in Boston, open to interested parties.

Mayor wants thousands of housing units built near the T

The city of Boston's Department of Neighborhood Development has filed legislation (sponsored by Mattapan's State Rep. Russell Holmes) that would allow the MBTA to sell land along its rail lines to developers at discounted rates, according to Scott Van Voorhis at the Globe. A second proposal would allow the city to offer property tax incentives to developers in order to encourage them to build housing affordable to those with low and/or moderate incomes.

Getting around the Seaport District by car can be a royal pain, especially during the evening commute. According to the Boston Herald, the Massachusetts Convention Center Authority (MCCA) thinks it has the solution. It wants to get into the shuttle bus business.

Measured in terms of passenger trips and customer satisfaction, the MBTA's Late Night Service Pilot Program is a success. Measured simply in dollars and cents, however, it's a failure, expected to run a $10.7 million deficit during its first year. If things don't change, it seems likely the service will be cut back, or canceled entirely.

The MBTA broke in unrelenting record-setting winter weather but to be honest it's often late, unreliable, and long in the tooth year round. Call your state legislators, tell them about your commute and ask them to invest in greater Boston's public transit system.

So much for the day off

I was one of three people who had their cars broken into on Friday afternoon at Quincy Adams T station garage. Golf clubs were stolen out of my trunk and my window was smashed. One of the other unlucky souls mentioned a laptop being stolen and both of the other victims had much more extensive window damage. Oh, they also keyed the side of my car just for kicks.

Being that this is the second incident in the past six months, I vote that we up the security in the garage please.

Why is the MBTA apparently keeping

the closure of Government Center station such a secret from the passengers? As I first mentioned some weeks ago (in a reply to another post), announcements about the closure, save for an occasional Green Line operator, are almost non existent. Further, only a handful of the line maps I've observed on Green Line streetcars have not yet been modified with the temporary "CLOSED" stickers over the Government Center stop.

But earlier, I received the ultimate proof of the MBTA's campaign to keep unwary tourists and other non-everyday users of the system in the dark about the Government Center closure. Witness this alert:

For once, the T actually appears to be doing something totally sensible

Got this alert earlier:

As to why this is sensible - at present D trains terminate at Park Street most of the time due to Government Center being closed, and this change will eliminate the "musical platforms" nonsense that currently happens.

I barely had time to snap these pictures on my way to the car this morning. There are two hospitalized with non-life threatening injuries, a traffic light and street light are down, and the corner bricks are off the Lynn Museum. Link to more photos.

Heading home after lunch with my inamorato, I was caught in the afternoon rainstorm. I boarded the CT1 bus at the corner of Huntington Ave and Massachusetts Ave. The CT1 is the "Express" version of the #1 bus that runs all the way from Harvard Square, Cambridge down Mass Ave to Dudley Square in Roxbury. It has fewer stops than the regular #1 bus.

Last month, the MBTA announced a contest in which anyone could design what could be the next MBTA map.

A couple months ago, the Federal Transit Administration updated its National Transit Database to include data from 2011. Their database analyzes the country's major public transit systems in many ways, including by size, usage, and budget.

The NTD includes "Fare Recovery Ratios" for transit systems across the USA. This is the percentage that passengers pay - out of pocket - compared to what their rides actually cost.

The data is further broken down by system and within each, by mode of transportation - so, subway (light rail and heavy rail), but also commuter rail, bus, an boat rides.

Passengers in Boston and in Massachusetts pay wildly different percentages of real costs. (The data is from 2011, prior to the July 2012 fare increases.)

Heavy rail transit riders (Red Line, Blue Line, Orange Line) pay about half of what their rides actually cost, as do light rail users (Green Line). Commuter rail passengers pay about 44% of the cost of their rides.

Demand response users (which I believe means "The Ride", here in Boston) pay just 4.14% of the cost of their rides.

The T's expansion (and shrinkage) during past 117 year

How has the MBTA changed / grown / shrunk during the past 117 years?

Check out the visualization below to see the birth of the Green Line in 1895, the expansion of the Red Line through 1985, and the "repositioning" of the Orange Line. Descriptions of the changes included under the map.