Somebody thought it would be fun to screw with housing-project residents, the homeless and the Wu campaign in South Boston today 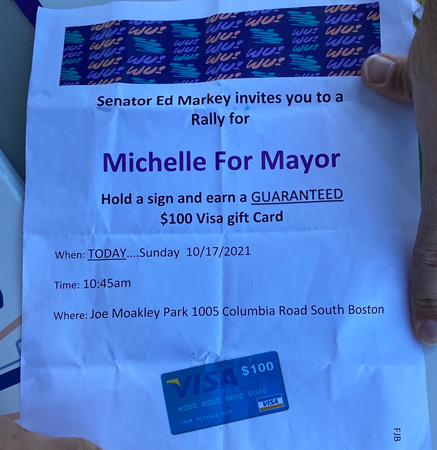 One of the bogus fliers.

At 11 a.m. today, Michelle Wu was scheduled to hold a climate-focused campaign appearance at Moakley Park with, among others, US Senator Ed Markey.

Before the event started, though, about 20 people came up to organizers asking for their signs so they could earn their $100 gift cards. Read more.

I and my staff are safe, sheltering in place, and following the guidance and protocols of Capitol Police.

No surprises in Massachusetts

Markey: If Trump gets to appoint RBG replacement, Democrats must expand Supreme Court and end filibuster if they take the Senate

Sen. Ed Markey reacted to the news that Senate Hypocrite Mitch McConnell is pledging to bring Trump's Supreme Court pick to the Senate floor for a vote exactly unlike the way he kept Obama's pick off the floor in 2016: Read more.

Ted Nesi reports on the first time a Kennedy ever lost an election in Massachusetts. Read more.

Report from the Markey/Kennedy debate

The Dorchester Reporter watched last night's debate between the incumbent senator and his challenger.

Joe Kennedy III made it official today: He'll be running next year for the US Senate seat now held by Ed Markey. Shannon Liss-Riordan and Steve Pemberton are also running.

If Kennedy wins next year, he will be the third Kennedy to represent Massachusetts in the Senate.

ComonWealth reports on some expensive polling going on right now. 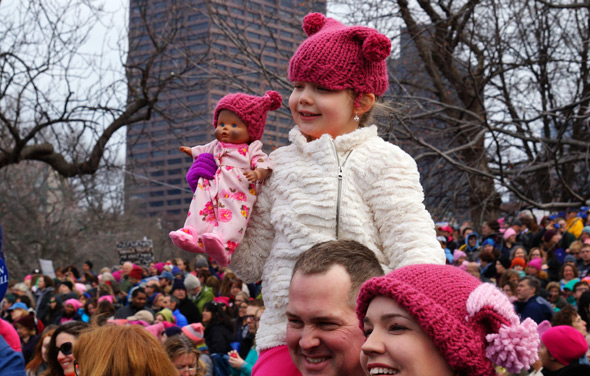 From Beacon Street to Boylston Street, from Charles Street to well past the Frog Pond, tens of thousands of people filled Boston Common today for a protest against the new administration. From Mayor Marty Walsh and Sen. Elizabeth Warren to women, men and children in the crowd, people vowed to fight for health care for all, for immigrants, for LGBT rights - and for science. Read more.

And no doubt completely unrelated. If you happen to pass by the biolab on Albany Street Wednesday morning, don't worry about all the emergency vehicles you'll see parked out front - there'll be no Andromeda Strain release that day (besides, the lab hasn't yet gotten final approval to stock killer death viruses, let alone hexagonal killer death viruses from outer space).

This past week was a big week in politics here in Boston.

1. Steve Lynch will not run for Mayor.

Leading up to this past week, many speculated that 8th Congressional District U.S. Representative Stephen Lynch was using the U.S. Senate race to raise his profile so he could run for Boston Mayor. Lynch's chances were ruined by losing his hometown of Boston by a margin of 31,000 plus votes to Lynch's 28,000 plus votes.

Essentially, Markey "Al Gored" Stephen Lynch. To understand this, Al Gore lost his home state of Tennessee to George W. Bush in 2000 and that was the real reason why Gore lost the presidency not because of Florida. For Lynch to have won the U.S. Senate Democratic Primary, he needed to run up the vote against Markey in Boston and this just did not happen.

The 1st Suffolk Senate race was an unbelievable contest. My parish, St. Ann's, falls right inside this state Senate district. Three great candidates fought tooth and nail to replace Jack Hart who left his seat for a high paying job at a law firm.

The Globe calls the Senate primaries for Markey and Gomez.

Only one day before the April 30, 2013 Democratic Senate Primary for United States Senate, WBUR is reporting that Congressman Steven Lynch has canceled all but one campaign event due to an unspecified illness. Lynch's sole campaign event that will still take place will be his rally tonight at the Local 7 Iron Workers Hall at 7PM.

Maybe he'll take a ride over via one of the tunnels

The Globe reports that while the president visits a Dorchester charter school today in advance of supping with rich supporters, US Reps Markey, Capuano, and McGovern will be in East Boston protesting his proposal to cut home-heating oil subsidies. They'll be joined at the home of somebody who uses the program by, of course, JOE4OIL.

The crowd chanted "They say cut back, We say fight back" before the speakers came to the podium.

Congressman Ed Markey addressed the crowd to remind them what caused the financial crisis (and it wasn't public public sector workers.) Next, Congressman Mike Capuano announced, "I am a cheesehead" to communicate his solidarity with the working people of Wisconsin fighting for the right to bargain collectively for wages, benefits and work conditions. Mike foretold of similar attacks on worker rights by Republicans soon to come in Indiana, Ohio, Michigan and Pennsylvania. He said it was a fight for the middle class.