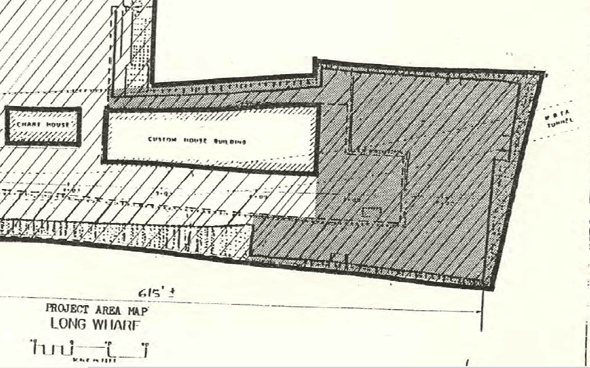 A federal appeals court today ruled the BRA can't turn a Long Wharf pavilion into a restaurant because the structure is protected from commercial use as part of a federal grant detailed on a map the BRA signed off on, then lost - but which a couple of retired National Park Service workers found three decades later.

If the BRA wants to extend what federal judges now call "the long war over Long Wharf," it could ask the entire US Court of Appeals for the First Circuit in Boston to review the ruling by a three-judge appeals panel. If that "en banc" court upholds the ruling, the BRA would then have to convince the US Supreme Court to hear the case.

The BRA and a group of North End residents have been battling over the issue for a decade - in a case that has now cost the BRA upwards of $500,000 in legal fees.

At the heart of the war is $825,000 in federal money the BRA accepted from the federal Land and Water Conservation Fund in 1980 to fix up the then decaying Long Wharf. The grant carried a restriction that the money not be used for "other than public outdoor recreation use." Although the pavilion was built to cover a Blue Line emergency exit, most of the time it is used as a place for people to sit and enjoy the harbor views.

The BRA and the state Department of Environmental Protection said the pavilion was outside the boundaries of the area covered by the grant. As is typical, the BRA could not find the original map it submitted for the federal grant - the authority has long been careless with paper records - so it relied instead on a later map that showed the proposed restaurant site was not included.

The National Park Service at first signed off on the restaurant deal - even as the initial restaurant operator gave up and opened a restaurant in South Boston instead as the legal wrangling went on and on in state court. But in 2012, two retired NPS workers found the original 1980 map - which it turns out the BRA itself had included in its grant application - and a couple years later the park service revoked its approval for the restaurant idea.

The BRA then sued the National Park Service saying its reversal was arbitrary and capricious. Last year, a US District Court judge in Boston ruled against the BRA, saying the park service was not being arbitrary and capricious but was in fact exercising good judgment in reversing a decision it only made because of shoddy record keeping by the BRA.

A three-judge panel in the US Court of Appeals for the First Circuit said today it agreed:

Far from being an unauthorized taking, NPS's determination that the Pavilion area could not be developed for commercial purposes was entirely consistent with both the terms of the LWCF Act and the project agreements. To cinch the matter, the [grant] restrictions were part of the bargain that the BRA struck with NPS in order to secure the financial assistance that it sought to rehabilitate Long Wharf. When a party applies for and receives a federal grant, there is nothing either unfair or unconstitutional about holding the grant recipient to the terms of its bargain.

The court noted that when the MBTA sought federal approval to build the pavilion and emergency exit, the state included a copy of the original 1980 map, not the 1983 map the BRA was trying to insist should be used.

The fact that the Commonwealth felt it necessary to secure NPS's consent, combined with its inclusion of the 1980 map in its correspondence, serves to fortify NPS's determination that the 1980 map was the map of record with respect to the [grant] boundaries.

The court also criticized the very nature of the BRA appeal of the lower court's ruling. The BRA had originally sued based on federal administrative law - hence the "arbitrary and capricious" argument - but in its appeal, the authority asked that the higher court consider whether the National Park Service was depriving the BRA of its rights under contract law. The judges said they were puzzled why the BRA didn't make a contract-law argument to begin with. But having made its legal bed with the administrative arguments, they continued, the BRA would have to lie in it and accept another ruling upholding the park service's administrative right to do what it did, the judges wrote.

I might go there twice a year but it's a neat place to see how active and vital the harbor is.

I appreciate the shade, so I can enjoy the water without being in the direct sun.

Kudos to the retired National Park Service workers.
Does not speak well of the BRA, but that's par for the course.

... to eradicate the BRA and create a new more effective, transparent and honest agency to take its place?

Although originally Walsh was in favor of elimination, shortly after the election they released an alternate press release which excludes the BRA from a list of things Walsh wants to change. As it turns out the original press release was lost behind a desk so they hope the revised copy will suffice.

Dies anybody have a copy of

Dies anybody have a copy of the original 14 point plan?

Because everyone thinks the BRA is corrupt, they're going to try to change identities?

The private sector does this all the time.

Your "security" company gets a bad reputation for killing innocent people and overcharging the government? Change its name from Blackwater to Xe. When everyone inconsiderately remembers that Xe used to be Blackwater, change the name to Academi. That will make everyone think it's somehow education-related.

Word's out that your construction company never finishes the jobs it gets paid for? Close that company, and open a new one the next day.

It's not even unusual in government. The Defense Department used to be the Department of War, etc.

Of course, spending the people's money on branding consultants is a colossal waste.

Got an email about this this morning

This is all very BRA. So they "lose" a map that they themselves filed as part of the plan. If you recall, after 9-11, the Hancock Tower (errr, umm 200 Clarendon?) closed their observation deck. Supposedly a permanent observation deck was part of the original plans in order to get the approvals for the building - but then the documents supporting this somehow disappeared - or never existed.

Most recently the BRA tried to renew their urban renewal powers - but apparently it slipped their mind that they signed away these powers about 10-12 years ago to get their last renewal granted. Thanks to Shirley Kressel, that process is now on hold as the state hasn't signed off on it - most likely because the state agency that has to sign off is concerned they'll get sued and lose by Kressel and others.

All in a day's work for the good ole BRA.

The world needs more people who take the time to read the damn documents.

The new name of the BRA will be People And Neighborhoods That Investigate, Examine, Study, or PANTIES.

Normally when a lifelong

Normally when a lifelong criminal decides to adopt an alias to hide his past from people, he does so without putting out press releases and holding photo ops. Guess it works differently for public entities.

Actually the BRA is "self funding"

They do this in a variety of ways - but they extract money from developers - take land by eminent domain and rent it out, demand all kinds of linkage fees and occasionally resell property on behalf of the city. Usually this means the city owns the property - sells it to the BRA for$1 who in turn sells it to a favored developer at half of the market value. Then the favored developer and his/her cronies give money to the politicians. The politicians then mandate that the project must use union labor to get the approvals, so the unions give money to the politicians too.

All nice and neat.

It's a huge incentive to approve any project, no matter how 'bad' it might be for the city or the neighbors, in order to cover their operating costs. Why say "no" to anything if it means you're going to miss out on a payday.

AG or feds need to prove it just once

And a lot of people go to jail. And it maybe puts the fear of god into the next people who will try it.

Putting lipstick on a pig

Thanks for the link...

... to what sounds like a whole lot of nonsensical (and fundamentally meaningless) doubletalk.

"BRA officials have said the project could include options ranging from a new mission statement to a new name and logo."

According to northendwaterfront.com, one of the NPS guys even put a picnic table in the shade pavilion. Needless to say, the minions of the BRA took it away. Actually, the $500,000 in legal fees could have provided a lot of picnic tables out there. But that would have benefited the average person and that's not really the BRA's thing. They will come up with new ways to use our money to take our park away from us.

Another reason to let Marty get a different job

The near messes (and misses) of the Olympics and drag racing through Southie were bad enough. But the fact that Marty refuses to do anything with an agency for which Robert Moses would sing praises says that Marty assumes what is good for developers and constructions companies is what's good for the city. That worked so well for cities when the philosophy was what's Good for GM is good for the country.

It's continuity of government

Go look at the article again. Who was mayor in 2012? How many times was he reelected?

I do think the city's plan was BS, but let's not pretend that this was the doings of Walsh and/or Golden.

so it relied instead on a later map that showed the proposed restaurant site was not included.

Odds this map was crudely drawn on a cocktail napkin?

I left out the possible next step in the case: If the BRA wants to appeal the ruling, before going to the Supreme Court, it could ask all the judges in the First Circuit to review Friday's ruling by a three-judge panel (you'd think I'd remember that from the Brady case, no?). Then, if that goes against them, they could try to go to the Supreme Court.

If I'm reading this correctly...