Workers are busy this week assembling a series of large metal pipes into the frame of a canopy for long suffering riders of the Washington Street and Centre Street buses that use the upper busway at Forest Hills. The old canopy was taken down years ago as part of the reconfiguration of the busway to make way for the new Arborway/Washington Street layout.

Once the frame is in place, workers will be able to install the metal sheets that will protect them from rain and snow.

The rest of the work: 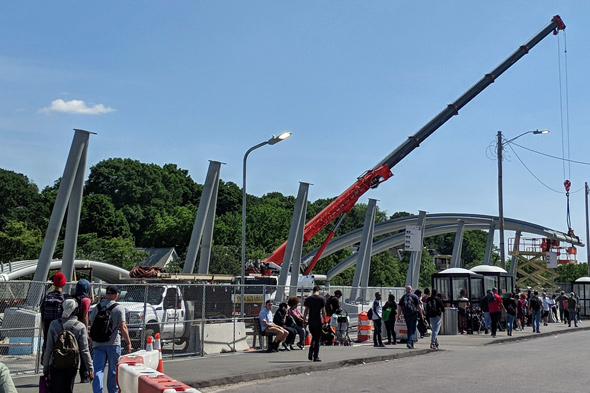 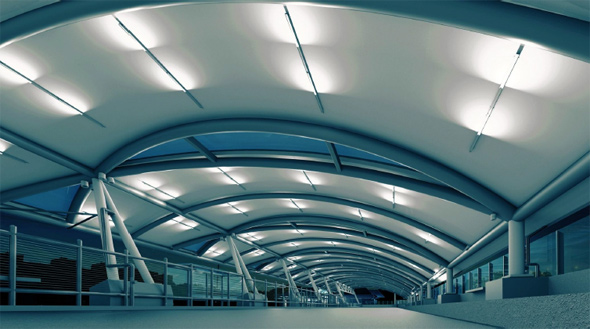 What could possibly go wrong?

The canopy should be covered withsolar panels

Ya that would add a year

To the project, no thanks. More importantly, fix the f'n traffic.....

Will I be happy when this is done?

Yes, assuming those waiting for buses on the outside platform aren't pelted with rain or snow when there is a slight wind (accepting that a high wind could get people in the old busway wet, too.)

Wasn't the Chunnel finished faster than this?

Not an American project

The Chunnel was not based on the standards of excellence applied to US public transportation projects.

For instance, the Big Dig. Only one person got killed.

...will this be as utterly useless as the Kenmore "canopy" that took forever to build?

For the riders whose buses will berth closest to Hyde Park Ave, it should be good. As for those on the outside platform, I give it 50/50 that it is like Kenmore. And I'm the resident Casey/Arborway/Forest Hills cynic.

Show it to be somewhat useful.

and a year behind.
that and all the rain and snow load is going to just cascade down on the lower parking lot.
it might be nice if when done we dont have to walk three hundred yards to get in the station

that and all the rain and snow load is going to just cascade down on the lower parking lot.

$20 says they've got that taken care of through gutters, rain leaders, and snow fences. Hopefully the runoff will go straight into the storm system so it's not ponding on the sidewalks/drive lanes.

Seems like a LOT for the canopies and signs.

Those prices have been going up for a while. Especially steel (even before the tariff talk). Construction estimators usually include 3% to 5% per year in escalation costs (and have been for at least 5 to 6 years).

Looking at the roof design, it's a lot of steel and special shapes. They did repeat the shapes over the length of the canopy, so there's that. According to that document, the length of the canopy is 330', roughly a football field, so the cost is a roof over that length by some width - maybe somewhere between 50' and 70' (hard to tell what width they used for the bus lanes)? So, steel and whatever the roof material is. Is the cost high? Maybe, but when something is added as a change order, there is always an upcharge from what it would have been had it been part of the original bid documents.

edit to add: the columns holding up the canopy need footings, so there are footing/foundation needs, (re)paving around said columns, etc. So more than just the steel and roof bits.

Signage. That's a cost that people always forget and when they remember, think it should be much less. Proper signage isn't cheap, and there is always more needed than expected. Wayfinding is a challenge, no matter the environment. While I wouldn't be surprised at the number associated with it, I'm curious to know what new signage was needed with the addition of the canopy. If it was missed altogether in the original bid docs, shame on everyone involved.

Interesting, except for one thing

I'm not certain how one would cook the books on this. (honestly, I don't know how to cook books, so there's that) I haven't looked into it, but I have to believe that MassDOT has a Capital Program that the extra $12mm is covering for the change orders.

I picked my words poorly

But still, how do you set a budget for a project without even providing a rough estimate as to what one of the components would cost? Ignoring something that would run a mere $5 million is sketchy in my mind. Not criminal (i.e., what people typically think about when they read "cook the books") but just poor planning. Laziness.

I mean, if MassDOT really wanted a bridge option for this project, going by this budgeting they could have presented figures for demolition of the old structure and utility relocation, then presented a revised budget halfway through for the cost of the new span.

You can bet that the canopy was talked about from the start. How that canopy was in, then out, then back in again only MassDOT knows that path. I'd consider that it wasn't laziness, but some decision-making process that occurred over time. And never as logical as one would assume or like.

One question I do have: is the Owner's Contingency a separate amount not included in the presentation materials found online or in that $74mm? Granted, a 10% contingency wouldn't cover the whole canopy, but it would take care of some. Or, maybe MassDOT had a separate budget set aside for the canopy. Sometimes projects are broken up into smaller budgets.

Who knows, but I agree with you that the info shown just raises more questions.

Police arrest Jamaica Plain man on drug charges; say he had a pound of cocaine and more than $260,000 at his Armstrong Street home
Guy tases somebody who asked him to put on a mask on a bus at Forest Hills, police say
You think he has a pair of spats on under the water?
Good start to the day in Jamaica Plain
Feathered faceoff at Leverett Pond
Gunfire on South Huntington Avenue in Jamaica Plain