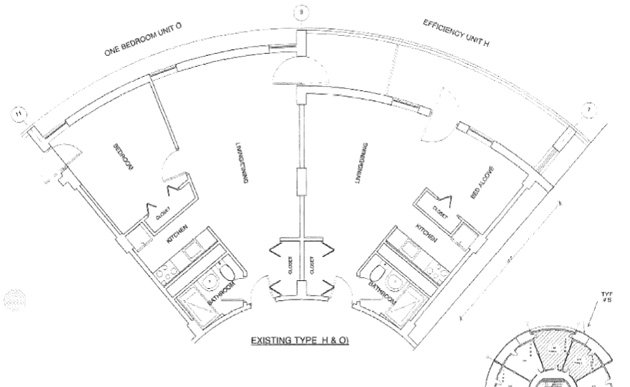 Floor plans of a couple of rounded apartments in the building.

The Boston Housing Authority has filed plans for extensive renovations to Egleston Square's Doris Bunte Apartments, which used to be called Walnut Park Apartments, using a combination of new federal funding and tax credits for historic properties, which the city's tallest round apartment building now is.

Renovations of the 20-story round building will include installation of completely new HVAC components, windows, flooring and doors as well as extensive updating of kitchens and bathrooms and the removal of asbestos and the installation of sprinklers. The building will also be updated to make it more accessible to people with disabilities. The two-year project could begin in January.

In a filing with the BPDA, the authority says a key part of the financing should also come in January, when it finalizes an agreement with federal officials to convert what is now an officially designated public-housing building into the equivalent of a private building that accepts Section 8 vouchers.

The switch from public housing to Section 8 will mean a dramatic increase in revenue from federal housing funds - as a Section 8 landlord, the BHA will get an average per-unit subsidy of $1,670 a month, compared to the $672 it gets for each unit in official public-housing buildings. Assuming all of the building's 162 available apartments are rented, that alone is nearly $164,000 a month in extra income, which will help the BHA repay the long-term loan it is expecting from a state housing fund for the work.

The BHA says the financing shift will not affect tenants - they will continue to pay no more than 30% of their monthly income in rent. Nor will the change affect the tenants the BHA now allows into the building - senior citizens and younger residents with disabilities.

To become a Section 8 landlord - and to deal with the tax credits for renovations to a historic structure - the authority will set up a limited liability company to act like any other landlord that accepts Section 8 in Boston.

The BHA will go out to bid for a company that wants to invest in the historic-renovation tax credits, and which will become a part owner of the LLC set up to run the apartments.

In addition to funding the renovations, the extra revenue will let the authority hire an on-site "service coordinator," a sort of concierge who will help residents with appointments, transportation, referrals to service providers and translation for non-English speaking resident. The coordinator will also be responsible for organizing activities for residents.

The 54-year-old building was designated for placement on the National Register of Historic Places in 2019, the authority says:

Built in 1967, the residential apartment tower was designed by the Boston-based architecture firm Richmond & Goldberg, in collaboration with the Boston Redevelopment Authority (BRA) as part of the plan for the Washington Park Urban Renewal Area. It is the only federally funded, cylindrical apartment building designed specifically for elderly housing in Boston. The building exhibits characteristic Modern architecture components, including the use of industrial materials, pebble dash end walls, colored metal panels, and raised horizontal and vertical concrete bands.

To prepare for the work, the BHA says it stopped approving new rentals this past February.

Renovations will be done in 19 units at a time, with each section of units expected to take eight weeks for a full renovation. Any residents living in apartments will be moved to other units in the building temporarily - except for residents living in apartments specifically outfitted for "accessibility," who will either be offered units in other BHA buildings or hotel rooms during renovation.

Has anyone ever asked why the

Has anyone ever asked why the Feds subsidize Section 8 apartments so much more than plain old public housing? Is it lobbying by the tangled web of private management companies that make money off it?

It allows people on section 8 to have more options for housing, instead of just living in a complex with other section 8 residents with no history to tie themselves into the neighborhood.

No one private landlord would ever accept section 8 vouchers if they were being paid $600 instead of close to the actual market rate, perhaps?

In addition to the subsidy,

In addition to the subsidy, the landlord would also get the 30% of the tenant's income.

Instead they're doing the opposite. With this arrangement, the Feds spend more and the city gets more, but some of it goes out the window to a private investor.

If you can't afford to live on the coast, move towards the frontier (or where it used to be).

Now take a look at how much MORE money the northeast pours into those coffers than any other region.

Be sure to take a benedryl first, though - fact allergy is real!

Lol you know the subsidy isn

Lol you know the subsidy isn't that much in the midwest though, right? Like, it's on a scale according to cost of living? And also those midwestern states have way fewer jobs, and no real public transportation so you have to own a car to get to the jobs they do have? And midwestern states all rejected the medicaid expansion so if you're poor, fuck you regarding health care?

Also, you know, some people grew up here. Some peoples entire families and history and communities are here, on the coasts. The expectation that people with deep roots just suddenly pack somewhere and move (that may or may not be safe for them, if they are a certain color or speak a certain language) because the city has gentrified around them, like.... that's shitty, you know that, right?

Reminds me of the Capitol Records tower in LA.

2) This one place south of Tremont in the South End (West Dedham, I think?) almost right across from public housing with the facade that kinda looks like buildings in New Orleans

4) Doris Bunte apartments (today I learned what they're called)

That and the stands at Nickerson Field are what is left of Braves Field. The police station was the offices and ticket windows.

The stands are the former right field bleachers.

There are some pretty good pictures out there of where Raising Canes and the Paradise is of that whole block being filled with Model T's before the buildings now there were built.

Also, I think, let me emphasize think, you can go to the third floor of the Federal Reserve. There is a cafeteria there with a deck that looks over Dot. Ave. and Fort Point.

For an ever better view, you can use the top floor deck at Independence Wharf during most of the day and they are really nice about it.

If Michelle Wu said today that one of her first acts as Mayor would be to turn the screws on Marriott and reopen the Custom House observation deck without their ever increasing limitations on access to public space and return to its 2000 status as just go on up, I would stand in a Sully from Monsters Inc. costume at any rotary in the city and hold signs for her.

Has been closed indefinitely because of the jumper there a few months ago.

Did Not Know That

However, if people deep six off of the Mass Ave bridge, we don't shut it down.

That is quite a specific

That is quite a specific qualification:

It is the only federally funded, cylindrical apartment building designed specifically for elderly housing in Boston.

I can only assume that there are many federally funded, cylindrical apartment buildings in Boston not for seniors that I don't know about!

Yeah, that stuck out

The only other thing close I can think of is the (now closed) Roundhouse Hotel at Mass and Cass. There's also the (now closed) Church of All Nations on the edge of Chinatown. But otherwise, I think they're all commercial buildings, including the (now closed, natch) Peoples Federal Savings Bank in West Roxbury and the Palladian Palace at International Place. Oh, and the (now closed, but soon to reopen) Roslindale BPL branch.

And it is a polling location with the best volunteers and such a wonderful vibes.They've always had signage in so many languages. I love going there, chatting with residents and other voters. During major elections, it's been fascinating to see how demographic neighbors change, but a little bittersweet too.

This makes me really, really

This makes me really, really nervous:

The BHA will go out to bid for a company that wants to invest in the historic-renovation tax credits, and which will become a part owner of the LLC set up to run the apartments.

Isn't this the process that the soulless vampires at Alden Torch have been using to try to take hostile ownership of the affordable apartments TDC owns in the South End, along with many other places across the country?

This says the law Alden Torch has been abusing is the "Low-Income Housing Tax Credit", which I assume is different from a "historic-renovation tax credit", but this has bad news written all over it.

Do not privatize public housing. Don't do it. The investors will end up owning the property.

Unfortunately there really aren’t any alternatives at the moment. With congress essentially refusing to fund the federal public housing program, LIHTCs are really the only game in town when it comes to building or maintaining subsidized housing projects. The choice is basically this or let the building crumble.

Person shot in the back on Dale Street in Roxbury
Woman charged with punching elderly man in a wheelchair in the head and robbing him in Nubian Square
Mothers walk for peace again
Citizen complaint of the day: Police can't collar loose goose
Roxbury man charged with lunchtime shooting outside Randolph Wendy's
15-year-old charged with shooting at Ruggles T station last month