New Back Bay complex could get hanging park over the turnpike 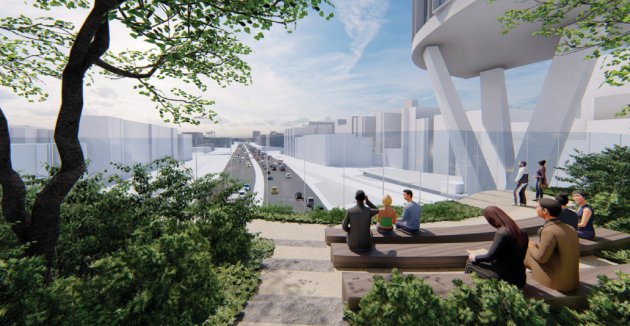 Newbury Street shoppers could one day stroll to a park and sip coffee as they watch the sun set over the roaring traffic on the Massachusetts Turnpike, under a proposal unveiled this week by Samuels and Associates, which wants to make an overhanging park part of its mixed-use complex along Massachusetts Avenue across from Newbury Street.

Samuels showed off drawings of its proposed park at a meeting of the Parcel 12 Citizens Advisory Committee earlier this week. The developer is seeking permission from the city and MassDOT to build a complex that would include two buildings - one office and one containing either residential units or a hotel - sitting on a two-story commercial "podium" atop the turnpike and what is now the ramp from Newbury Street to the highway - a ramp Samuels is seeking to move further down the lesser known end of Newbury Street. 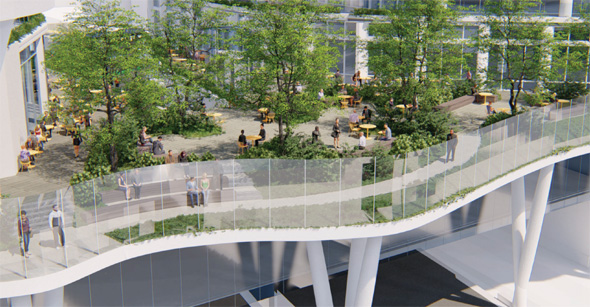 Samuels said it added the park to its proposal after hearing concerns from residents that the Mass. Ave. end of Newbury about the lack of open space there. It says it will also shift four floors from the residential building, which is directly visible from Newbury Street, to the commercial building after hearing concerns that the height of the residential/hotel building in the company's initial proposal would pretty much blot out the western sky from Newbury Street. 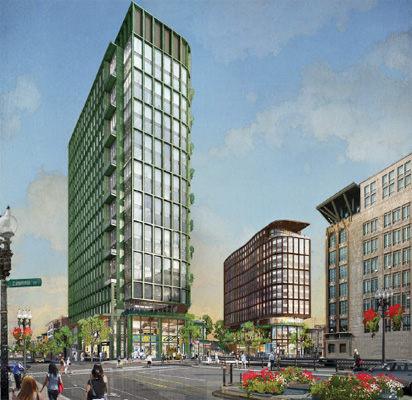 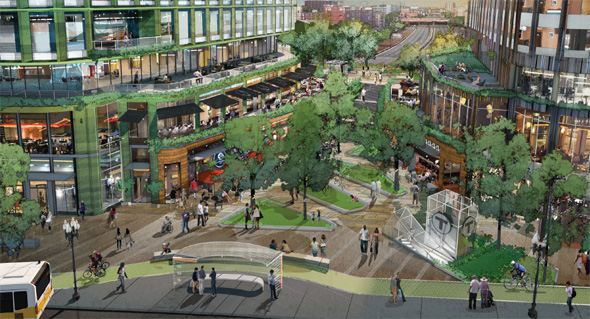 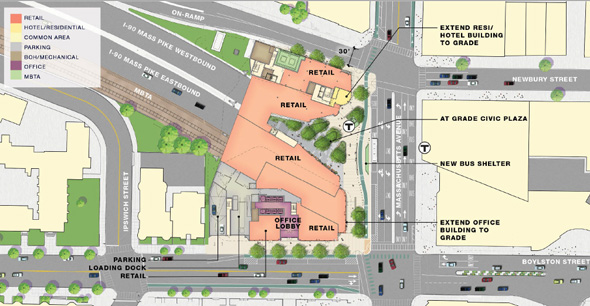 At the meeting, an architect on the project assured residents the overhang would be designed with redundant carrying ability - a truck taking out one of the supports would not bring down the whole thing. Designers will also figure out how to minimize glare from the setting sun on the park's wraparound glass wall so that inbound motorists are not blinded. 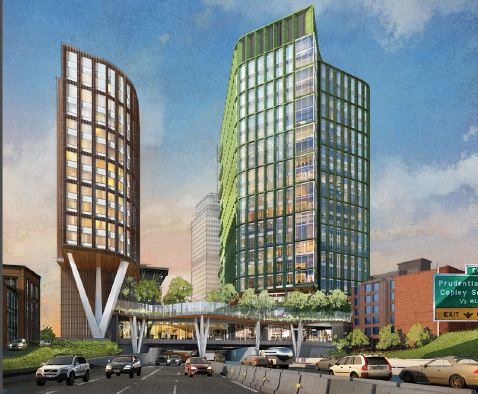 In addition to building over the turnpike, Samuels would also pay to redesign Massachusetts Avenue along the building line to make it friendlier to pedestrians (this will include a new entrance to the Mass. Ave. Green Line station on the other side of the street), bicyclists and bus riders. 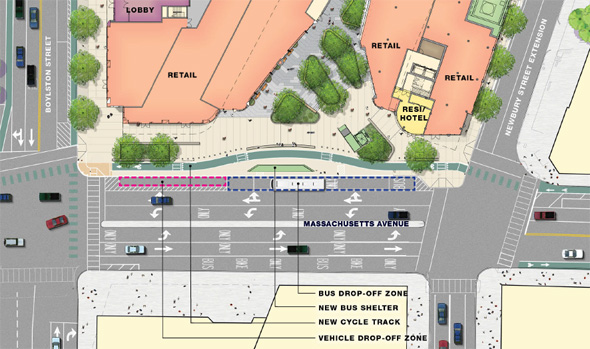 Anything to get rid of that fence with those ridiculous locks.

This is across from the locks

There's a separate proposal for that parcel.

Tokens of Love and Affection

can be so annoying can't they? And when the beach is defaced by vandals drawing hearts in the sand . .

(And yes, the fence in Boston isn't as pretty as the fence in Paris, but it looks even worse with a bunch of locks stuck on it)

when the weight of them start to damage the fencing. Reason why cities discourage them. Plus how does putting a device to prevent theft on a fence on a dirty bridge surrounded by junkies overlooking pollution indicate how much you really care anyway? Tattoo her name on your face.

What happened to the viola building?

Will there be a special

Will there be a special filtering system involve to eliminate all the toxic fumes and emissions coming from the traffic congestion below?

at that height, the traffic fumes will have been diffused plus they'll likely have high filtration levels on the air handlers - especially if they're pursuing LEED certification. Not clear if they are from presentation but current city code requires that projects be certifiable (would be certified if submitted) and that's an easy credit to get. Not to mention the platform they're building on will be fairly thick and impermeable so the fumes will only be an issue on the leading edge of the project.

I hear they are going to

I hear they are going to implement a congestion charge on drivers entering Boston to pay for it. Just kidding obviously! Drivers will continue to give people lung cancer and not be held responsible for killing those people.

What is the process where

What is the process where these private developers are basically taking public and using it for private development. Do they just say we will put in a park and fix the closest public transportation point.

it's literally the airspace over the pike. Hasn't been land since the 50s. the entire length of the pike extension should be a tunnel with developments like this.

Yes, they mentioned it

This came up at one of the neighborhood meetings I went to. Look up "Vision for Turnpike Air Rights". Apparently there has been a process in the works for years.

What was the public using it for?

It's open air above the Pike. I don't know about you, but I wasn't taking many long walks or letting my dog play in the air 30 feet above the highway.

It's not any worse than what's there now. Build it!

Looks like architects are starting to get the message

Finally, it looks as if the architects and developers are starting to propose workable interesting designs

Before anyone starts sputtering -- that kind of ramp in that location would allow buses from the Back Bay e.g. the soon to be rebuilt Back Bay T and railroad station development to offer access to the BCEC as well as all of the Seaport Office and soon to be lab space

...right up until the next parcel is bought.

Fenway Studios has a

Fenway Studios has a permanent easement for the northern light on the adjacent parcel. The only thing which would be built over the pike there is a park.

A small step towards the

A small step towards the eventual goal of covering the damn thing completely. Hope they hold him to that amount of greenery, will help with the particulates and pollution.

There used to be a tunnel underneath Mass Ave

It connected the Green Line with the #1Dudley bus stop.

Is it still there? It made it easier to catch the bus instead of sprinting across Mass Ave.

Yes its still there. Was boarded up in the 90s sometime from what I hear because of questionable activities down there.

Per the late 2018 filing on www.bpda.org, Samuels & Ass. are proposing to:

Reopen and renovate the currently closed Hynes Convention Center Station (the
“Hynes Station”) pedestrian tunnel under Massachusetts Avenue, creating a new
accessible headhouse within the Podium from street level to the existing
pedestrian tunnel, providing for a weather-protected connection to the Hynes
Station from the west side of Massachusetts Avenue, thus significantly improving
accessibility and connectivity to the Station, and improving public safety within
the district. The Proponent is working with MassDOT and the MBTA to ensure the
headhouse and connection are designed in coordination with the proposed
renovation of the Hynes Station as part of the Parcel 13 project.

There is a Parcel 11 that is next to Parcel 12 that in theory could be developed; it looks as though it doesn't go all the way to where the Fenway Studio are, so not an issue yet? There are parcels 10, 9, and 8, too, because Fenway Center is on Parcel 7.

The developer was picked by MassDOT after an extensive (and, delayed) review period.

The developer has to make rent payments - the "land" it will sit on is owned by MassDOT so these two buildings will be leased. According to the press release when MassDOT announced the selection:

The 99-year lease agreement with ADG Scotia covering Parcels 12 and 15 will provide to the Commonwealth a present value of $18.5 million in rent for the two parcels in the form of fixed payments early in the lease period combined with annual rent payments.

I don't remember what "present value" means b/c I haven't been in college since 1989.

The best part of the proposal is getting rid of that death zone of a bus stop. I've never hated myself enough to use it but I've heard stories.

Hold onto your hat!

That spot is one of the windiest in Boston.

No on the cycle track

I like the proposal but the cycle track is harmful and should be removed. Cycle tracks which aren't separated from the sidewalk become the sidewalk. It's bad situation where pedestrians walk into and stand in the track absentmindedly so cyclists either need to dodge them or just stay on the street.

These things are worse then no dedicated bike lane at all and I say this as a daily commuting cyclist. The stupid "tracks" on Comm Ave are a giant step backwards and the advocates for these should be forced to ride in them daily to prove to themselves just how useless they are.

(Of course, no one can use them daily since they're blocked by snow for most of the winter.)

I ride in them daily. They're

I ride in them daily. They're fantastic. Occasionally people walk in them but with good design that is minimized. The places with the highest bicycle use use them, because they're good.

I’m one of the few with

I’m one of the few with disdain for restricted bike lanes and off street paths that are not through a park. I’m usually on my own in such discussions. The traffic there is not fast enough to justify wrapping cyclists in pillows.

Out for a Father's Day swim
Back to normal: The Donna Summer Disco Party returns
Anotha scorcha
Female Esplanade swan dies, leaving father to care for cygnets
The father of our truffula country
Copley Square library to partially re-open Tuesday, with all services and branches to fully re-open two weeks later