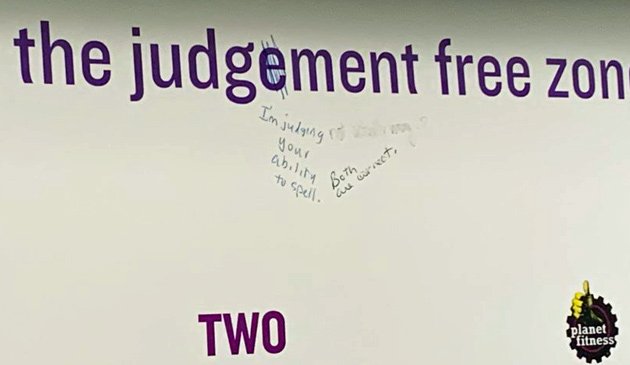 One of the legions of prescriptivist spelling nerds who have long harshly (if normally quietly) judged Planet Fitness for their "judgement free" zone finally couldn't take it anymore and took pen to health-club ad on the Red Line - only to be countered by one of the legions of descriptivist gadabouts who tells him to chill, as Michael, who appreciates "some good old fashioned pedantry," shows us.

Some feedback from the land of the rising sun

Or from an awful movie with a great soundtrack

Both spellings are acceptable.

I occasionally record Land Court judgments at the Suffolk Registry of Deeds, where they are referenced to and linked as judgements on their online system.

Both of these spellings have been in use for a long time, though the spelling with an 'e' is much older - it's the one used by Milton, Pope, and Shakespeare (though Shakespeare occasionally substitutes an 'i' for the 'j' - what a card). The 'e' is more popular in the UK, but neither spelling is exclusive on either continent. I don't know what authority a prescriptivist could appeal to; the OED has both spellings (and, if you go back far enough, several more).

OK, I may have overreacted

I admit it: I have no reason to ever go into the wax museum across from City Hall, but I'm glad the Planet Fitness that used to be there no longer isn't, because, yes, I'm one of those people who would always judge the place harshly because "No Judgement Zone" would be one of the first things you'd see after coming out of the Orange Line exit there (no, don't worry, I'm not riding the Red Line defacing Planet Fitness ads).

If you want to err on the side of

prevailing frequency, "judgment" is the way to go both in American and British English, by factor of at least 2:1 among Brits, much higher among Americans.

that source contradicts itself. The frequencies you give are based on Google Ngrams, which give frequencies of words in Google Books by publication date. However it also quotes this passage from the OED:

"The word is found in spellings with -dgm- from the early 16th cent., and by the late 17th cent. judgment had become the prevailing spelling, although judgement was still commonly found. Kersey (1702) is an unusually early example of a dictionary in which the headword form was given as judgement . During the 19th cent. the form judgement gained in frequency in British contexts, and is now the usual spelling in general British use, but judgment has remained the standard spelling in British legal contexts when used to refer to a judicial decision (see sense 8), as well as in U.S. usage."

The OED isn't very consistent either, as its examples are dominated by the 'e' spelling until they get into the 19th century. The quotes from Milton and Pope are from 1667 and 1711.

No need, however, to restrict ourselves to just 2 choices. The OED also has this helpful table of variants, with the periods in which they were in use. ME is Middle English; numbers are centuries.

You really shouldn't use Shakespeare as a reference for any spelling issue -- he couldn't even decide on the spelling of his own name.

And neither of them put in

And neither of them put in the missing hyphen...

They should have used Google.

They should have used Google. You don't need to go to school if you have Google.

Which is correct judgment or

Which is correct judgment or Judgement?

Judgment can also be spelled "judgement," and usage experts have long disagreed over which spelling is the preferred one. ... "Judgement" is in fact the older spelling, but it dropped from favor and for centuries "judgment" was the only spelling to appear in dictionaries.

Correct someone's grammar at PF and...

they'll pull the Lunk Alarm on you.