Somebody was running around Back Bay alleys lighting trash on fire, might be to blame for fire in Beacon Street building 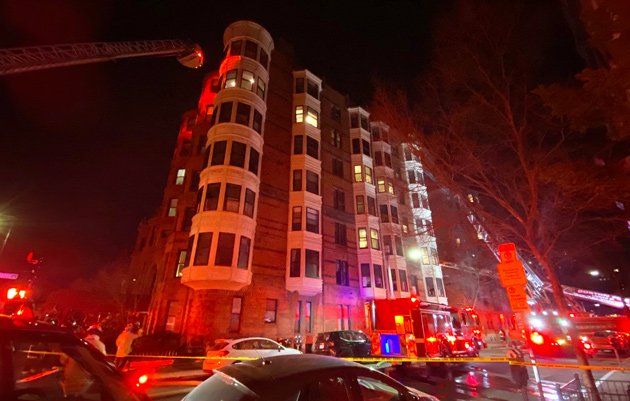 Somebody who spent Sunday night setting trash and Christmas trees on fire in Back Bay alleys may have sparked what turned into a two-alarm fire at 295-297 Beacon St. at Exeter Street.

Firefighters and police were kept busy tonight trying to track down whoever was setting alleyway fires, first in the area of Massachusetts Avenue and Charlesgate East, then several blocks away, in alleys off between Clarendon and Exeter streets.

The Boston Fire Department reports no injuries, but that nine residents were displaced. Damage was estimated at $150,000, and arson investigators, already in the neighborhood, were called to the scene.

A Public Works crew came in to remove discarded Christmas trees in one particular alley to keep them away from the arsonist's matches.

Last April, a man a man was arrested on charges he set a series of trash and dumpster fires in the Back Bay and Public Garden.

Wow, the fire got to the top

Wow, the fire got to the top floor pretty fast, are those buildings up to code?

I grew up in a rural area. We would always burn our tree after the holiday. Walking around this weekend looking at the trees on the curb, I admit my thoughts went to how quickly each would light up. Seems like an invitation for trouble to have so many dried up trees out on the street, although I can’t see an alternative collection method being viable.

Your loved ones are just as dead if they're killed by a crazy person as they are if they're killed by an evil person. Anyone committing arson that threatens an occupied dwelling should not ever walk free among us. This is not about punishment, or retribution, or deterrence; it's about making it physically impossible for the arsonist to continue.

Imagine if cars were permanently barred from the banks of the Charles
Flaming manholes heat up Boylston Street outside the Pru
Judge says former celebrity chef no paragon of virtue, but there were too many questions to find him guilty of sexual assaut
Art has a message
Jury selection starts next week for former celebrity chef accused of sexually attacking woman at the Pru in 2017
Liquor-license musical chairs held up due to lawsuit