A federal judge today rejected a request by more than 260 Mass General Brigham employees to block the hospital network from firing them tomorrow because they don't want to get a Covid-19 shot.

US District Court Judge F. Dennis Saylor emphasized the workers can continue to press their claim that the state's largest hospital system will be firing them in violation of the Americans with Disabilities Acts or in violation of their First Amendment religious rights, but ruled that the hospital proved a legitimate interest in requiring shots and that the masks, self-screening, frequent testing and social distancing proposed by the workers were simply no match to vaccinations for curbing a virus that has killed more than 700,000 Americans.

The employees who bought the suit, who include registered nurses and an oncologist, claimed that the fact the hospital did grant shot exemptions to roughly 234 employees, proved their case that the hospital was discriminating against the workers who did not get exemptions.

But at a hearing this morning, Saylor said the evidence before him showed the employees did not yet have a good enough case and failed to show the "irreparable harm" that would be required for him to grant an injunction. He cited one worker who claimed she needed an exemption because she is pregnant; the judge noted that under federal disability law, pregnancy itself is not considered a disability.

Mass General Brigham, which can't turn away patients, he said, "has a very strong interest in assuring the public that it is a reasonably safe environment that it is doing what it can" to reduce the spread of a highly contagious, often deadly disease. He concluded, in fact, that in weighing the potential harm to the employees of not granting the injunction versus the potential harm to Mass General Brigham should he grant it, that the hospital system would face far greater harm with unvaccinated employees on staff.

Ryan McLane, the attorney representing eight named employees plus what he said were 257 others, said the whole process was an inscrutable one and that employees were not given any way to appeal rulings.

Saylor agreed the process was essentially "a black box," but also said he would protect the names of members of the panels in further proceedings because of "the very difficult and tense public environment in which we are operating [related to vaccinations] ... a world in which it's easy to make Internet threats and to harass people on the Internet."

McLane said the workers are hardly in favor of Covid-19, that as health-care workers, their very jobs consist of doing everything they can to fight the disease. "Their job is fighting Covid-19 and they want to go back to work," he said.

Employees retain their rights to practice their religions, to do what they can to protect their own health - one of the plaintiffs said she has endured skin swelling after flu shots - that medical studies showed few hospital workers or patients got Covid-19 from each other and that the employees could be "reasonably accommodated" by letting them wear masks, practice social distancing, do self screening and work at home if they do get sick, McLane said.

Perrelli countered those studies were from 2020, before people started getting vaccinations and before the far more contagious Delta variant began circulating.

She said the mandate applies to all workers, even those still allowed to work at home, because the hospitals are still in "all hands on deck" mode, where remote workers know they can be called into a hospital or clinic at any moment.

Saylor himself added that self screening can be ineffective - some people are infectious but asymptomatic - and that many of the tests now in use are far from 100% accurate. He said McLane had simply failed to show that those measures are as effective as vaccination.

Saylor also ruled McLane had failed to show any retaliation against employees. Perelli said Mass General Brigham will welcome back any of the workers once they show proof of vaccination.

You work in a tier one hospital. No patients turned away.

I am so tired of health care workers who think it is their right to remain on the job while posing a real and present danger to their coworkers and to patients, who may be immuno-compromised, may have cancer, ,may be a transplant patient, may have lupus, or asthma or other chest diseases and come to the hospital expecting help, not to be infected with COVID. We know a lot more than we did 18 months ago, hospital transmission of COVID is way down, and we need to keep it that way.

How do nurses and doctors expect to practice social distancing?!

Amazed that a group of employees including nurses and doctors claim they can practice social distancing. You can't provide hands-on help or examinations from 6 feet away. What a disingenuous argument.

In an Aug. 18 academic paper, MIT researchers described how they re-configured their Spot robots, which have four legs and are designed to self navigate or be remote controlled to maneuver areas that wheel robots cannot, to provide contactless vital sign monitoring. Dubbed Dr. Spot, the robot includes an iPad so clinicians can have face-to-face consults with patients while conducting a remote exam.

Dr. Spot's contactless monitoring equipment can simultaneously measure vital signs including skin temperature, respiratory rate, blood oxygen saturation and heart rate. The team deployed the remote controlled robot within its emergency department tent to travel from a stand-up tent and within the ED as a way to limit healthcare workers' exposure to patients potentially infected with COVID-19.

That's a minor part of what doctors and nurses do

My oncologist palpates the locations around where I had a tumor to see if anything feels worrisome - a robot isn't going to do that (maybe in the future, but they aren't capable of it yet). Robots aren't yet ready to deal with bed pans or soiled linens for a bedbound patient or change wound dressings or many other things that nurses do.

Almost as if the pandemic has handed us the worlds greatest workplace bozo filter!

The impact on MGH/Brigham operations

I made this chart to help visualize the impact that the loss of these 260 employees will have on MGH Brigham operations: 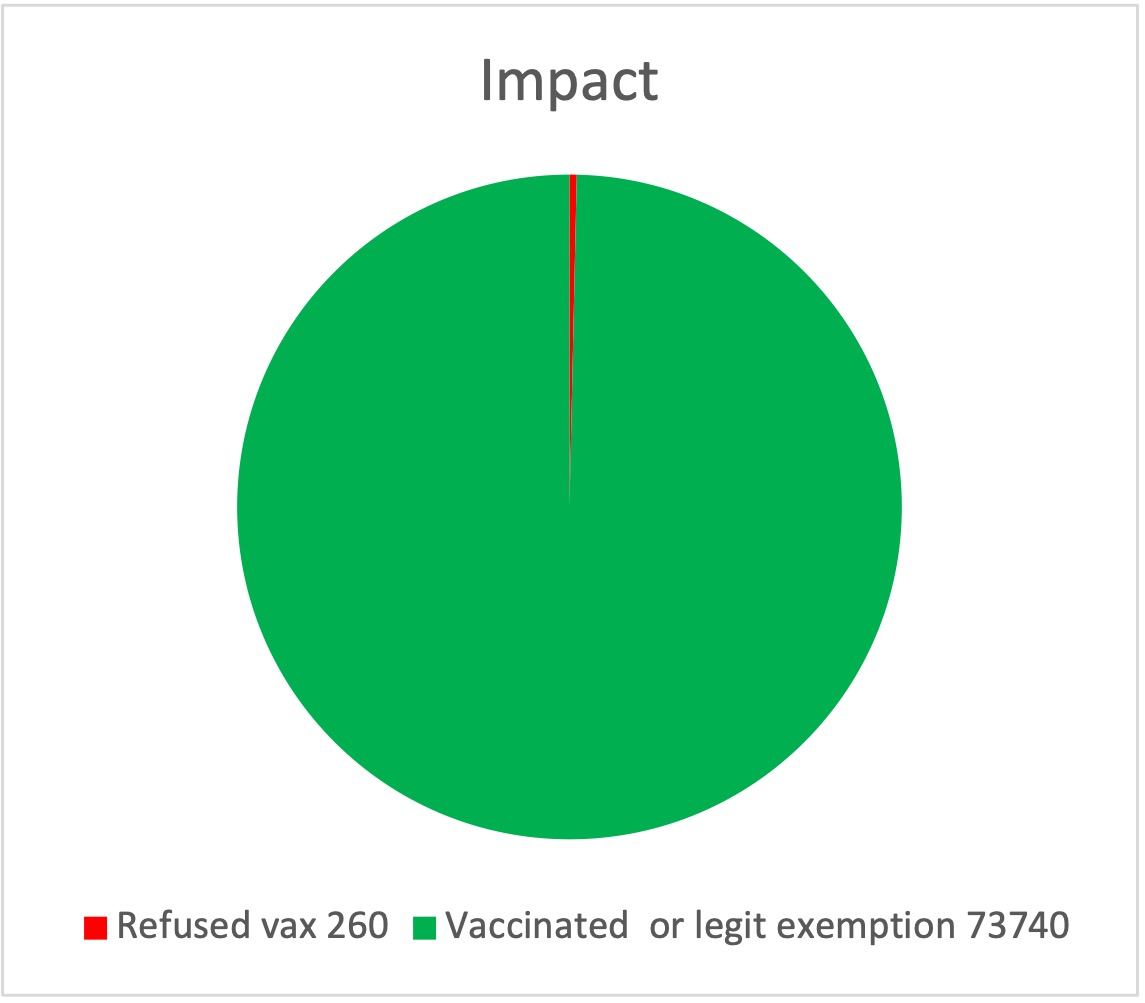 The full colored area is just shy of the estimated 74000 employees. (Close enough, most of these numbers aren't actually exact.) The yellow area and the thin lines above are the 2402 who requested exemptions. The thin green line at the upper left are the 234 who were granted exemptions, and the dark red wrapped around it are the 265 who are filing suit. 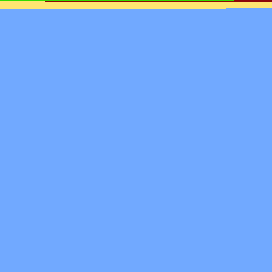