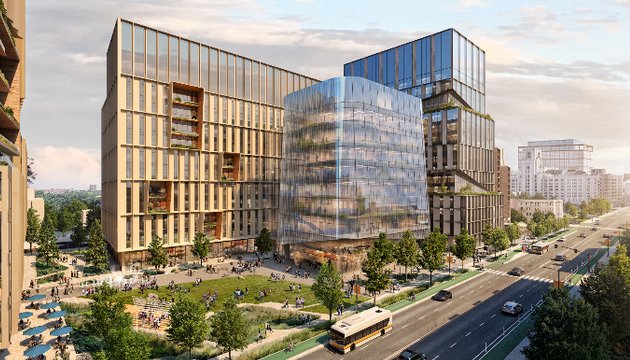 Skanska USA has filed preliminary plans with the BPDA for the proposed six-acre, four-building mixed-use complex it plans to build with Simmons University off Brookline Avenue as the school moves its current dorms to new space on its main campus a few blocks away.

The Proposed Project will include approximately 2.3 acres of public open space and up to 1.75 million gross square feet of mixed-use development spread over four buildings including residential, community space, retail, laboratory/office uses, and accessory parking. ...

Overall, the Proposed Project’s development aims to create a vibrant nucleus of innovative workspaces, active community amenities, and additional housing and public realm in the [Longwood Medical Area]. It will reinvigorate a long, dormant stretch of Brookline Avenue with retail, exterior and interior public open space, streetscape improvements, wider sidewalks and bike accessibility, and improved circulation for all modes of movement in the neighborhood. The proposed interior and exterior public spaces are designed with a mix of passive and active programming in mind that are intended to be welcoming to all from the Fenway/LMA neighborhoods and beyond. It will draw people onto, into, and through the Site, forge a better connection with the Emerald Necklace, expand on existing relationships with neighboring institutions, and add more cohesiveness to the Site and surrounding context.

The descriptions come from the "planned development area" proposal filed with the agency. This document specifies total amounts of development and offers rough ideas for what the new complex would look like. Under a PDA, the developer and the BPDA basically toss out a site's underlying zoning and come up with an agreement on what can be built.

The developer will still have to file a "project notification form" that gives more detailed specifications for buildings, parkland and other parts of the project.

Skanska says it would build the new complex over a period of 10 to 15 years, as Simmons is proceeding with separate plans for a 21-story "Living and Learning Center" on its campus next to Boston Latin School off Avenue Louis Pasteur and the Fenway. 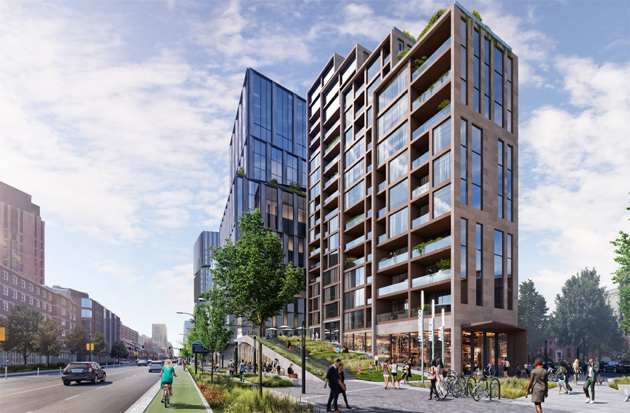 This proposal seems good enough, but am I the only one who is totally over the "tower in a park" concept? It's a relic of Modernist architecture and urban planning that survived because public open spaces enjoy a good reputation that seems to me unjustified by their reality. The open/green spaces surrounding the buildings are touted as magical "amenities" for the neighborhood, with little attention paid to whether or not anybody will use them, or if there might be other things that would help the neighborhood even more.

Many of these open spaces end up vacant, since no actual humans ever have any reason to be in them. At their worst, public open spaces around the edges of superblocks are anti-human monstrosities that actively damage the neighborhood around them (see: City Hall Plaza) or act as a physical barrier to the outside world, like a gated community in which the public is not welcome (see: Charles River Park).

“Good fences make good neighbors.” And remember, my friend, as long as we are still alive, we all have to breathe.

No actual Humans ever have any reason to be in them

It may be that some people in Boston do not appreciate the Public spaces but I am still in awe, for example, of people like the Chinese community in NYC. They brave even the coldest weather to go to the Park to exercise and greet the dawning of the day with hands aloft; with arms intermittently askew, and hands waving in a celebratory dance.

No one has thrown themselves into the Muddy River yet with rocks around their neck in protest? So un UHub like.

82 home games a year at $60 a pop will pay for some good dorm space over time.

A serious question about car requirements

Does the city mandate buildings include any particular number of charging locations in new development parking approvals? Or is that just a feature building developers/operators offer based on the free market?

Electric cars are cool but the logistics of charging in dense areas is going to cap their adoption without the right policies.

They either require or heavily push for all indoor parking to be designed for easy conversion to electric, from what I've seen in proposals

Electric cars are not enough

We need some serious reinvestment and expansion of transit. https://www.bostonglobe.com/metro/2018/12/14/vision-get-around-future-tr...

Note that you will not be able to buy or register a gasoline powered vehicle in MA past the 2035 model year.

Not enough, yes but still part of the solution

Let's say you get rid of 60% of the cars, the other 40% still need to be charged and it's got to be better to build garages with charging infrastructure built in, no? In my mixed neighborhood, people with off street parking can /have easily adopt electric cars but those in triple deckers w/ on street parking are running extension cords across the sidewalk, etc... In a denser neighborhood like Fenway, it's a much bigger issue.

It's inevitable that that area becomes taller and denser; design looks interesting.

Another bad design where no

Another bad design where no one will live. Epic fail.

More storage for smelly automobiles while homeless still roam the streets looking for a place to pitch a tent.

I'm all for more density (be it residences or lab space) but I'd love to hear what the plan is for how to get all of these cars into and out of the neighborhood if every new development is going to include this much parking.

Those older dorms are kinda handsome. I haven't spent time in that area for a good 20 years but the drive down Pilgrim Road was always charming.

Handsome, yes, but terribly wasteful of the space given all of those side yards that no one uses for anything other than to look at.

I have not read the proposal, but the way I look at the underground parking in low lying areas is this: It is parking now; a detention tank for when there is flooding in the future. That is, if the school, developers, and Construction Managers are thinking about the future and expecting their investment in this structure to be there for 50+ years.

Stupid is as Stupid Talks

Dormant stretch of Brookline Avenue. Dormant? Are bears sleeping their during the winter? Is it an area that is encased in an electronic field of suspended animation?

Or just particular words chosen to make the area sound somehow dead and useless, so as to avoid admitting that this Simmons just wants to "build baby build," and make more money.

The use of dormant here would make George Orwell grin in how well doublespeak and euphemism continue to be abused to justify profit making. Falling into the propaganda bear trap of falsely used words makes us all stupid. But then the folks who called the Jan. 6th insurrection at attempt by loyal citizens to preserve democracy still keep the prize of abusig language for the purpose of persuading the average person to stick their head into the sand of blind stupidity and suffocate.

I would take "dormant" here

I would take "dormant" here to mean that the street wall lacks activation and has little on it that is "human scale" to make it feel like you are walking in a place that is intended for pedestrians. Given that this stretch of road is almost completely dominated by fences, driveways, side-yards, and parking lots, I'd say that description is actually pretty accurate, especially if you assume (as I do) that there is already plenty of latent demand for more human-scale uses from all of the hospital staff and students walking through there.

I always thought that this area was one of the prettiest I walked through when I was a student at Boston University over 20 years ago. Some may prefer large commercial buildings, and less open space etc. all in the interest of a guaranteed revenue stream. Maybe there is a need for more labs to be built to the already glut of labs being built around Boston, and supporters may say again, all this is in the interest of human development. However, there is much to appreciate with what you already have, so do not be so quick to replace it with something gaudy that destroys all the positive attributes that Nature brings. I stand with those who believe buildings are just as unappealing as prisons if we wall up our cities with them and not let the peaceful smaller communities with grass, flowers, trees, birds, insects, and smaller animals... to co-exist. I looked at this proposal, and the one planned for Simmons University itself, and so far I do not find them compelling, and they are certainly unattractive, and perhaps, unhealthy too. There is certainly a lot more work to be done at the drawing board that in the end Simmons gets what it needs.

Are we thinking of the same

Are we thinking of the same Brookline Ave? Because last I checked it was one of the noisiest and most polluted car sewers in the city, the southeast side of which is completely dominated by parking lots and hospital driveways. Definitely not somewhere I would ever think to go for a relaxing walk.

T-Shirts with It's Alive! (insert name here) Life Science Labs. Can I copyright this? I think they'll sell like Dunkin Donuts in Boston.

I have no blades, and I must cool
Shots fired outside Fenway Park on Sunday
Developer files plans to replace the Fenway Star Market with an 11-story life-sciences building
Developer says it's secured financing to build 34-story apartment building across from Symphony Hall that was approved in 2017
Citizen complaint of the day: Boston Calling making windows rattle, babies cry for four miles around
Rainbow after the darkness and storminess