Landlord Michael Argiros goes before the Zoning Board of Appeals on Nov. 1 to seek permission to build a 40-unit, three-story condo building on Lagrange Street near Centre where the old Armstrong asthma-inhaler factory now molders. Read more.

The Zoning Board of Appeals this week rejected a proposed condo building on the site of a former asthma-inhaler factory in West Roxbury, citing neighborhood concerns about density, parking and the developer's proposal to assemble prefab modular units on the site, rather than hiring local workers for more traditional construction. Read more.

The Bulletin reports local landlord Michael Argiros has revised his plans for the burned-out inhaler plant on Lagrange Street in West Roxbury again; he's now proposing 40 condos instead of 46 apartments.

If you're avoiding those stern warnings to stay off the roads, you might want to avoid Lagrange Street in West Roxbury, where a major tree decided to obey the law of gravity in the area of Loyola Circle. And if it had to go down, you know it was going to take wires down with it.

Lagrange Street in West Roxbury is the stupidest street in all of Boston, thanks to Boston Public Works and the MBTA

Yes, we all get a good chuckle whenever a trucker wedges his vehicle under the bridge on Lagrange Street.

But it's frickin' stupid. Read more. 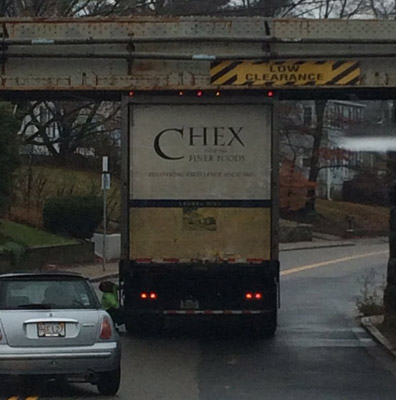 Tim captured the scene on Lagrange Street this morning just after a truck driver discovered one of the two spots in West Roxbury where trucks shouldn't go (the other being the other Needham Line bridge, over VFW Parkway).

H/t Paul MacMaster for the headline.

Police have blocked Lagrange near Centre thanks to the latest truck driver who tried to go under the train bridge only to learn that, no, they can't and now there's a tractor trailer wedged into the bridge real good.

The BRA board yesterday approved a 48-unit apartment building to replace the burned out old asthma-inhaler plant on Lagrange Street at Centre Street. Read more.

From the 425 Lagrange St. filing with the BRA.

The meeting was not quite as boisterous as past sessions. But at the one hearing the BRA was required to hold, residents of Lagrange Street and nearby side streets told landlord Michael Argiros they still can't stomach his proposal for apartments on Lagrange just off Centre because it's too big. Read more.

Architect's rendering of the view from across Centre Street.

The old asthma-inhaler factory on Lagrange Street that caught fire in September had a water pipe burst today, sending a flood of water onto Lagrange Street, most of which went into a fortuitously placed storm drain but some of which just froze on the street and sidewalk.

As of 4:30 p.m., police still had Lagrange northbound shut as a city DPW crew worked to shut off the main feeding the factory.

Developer Michael Argiros today showed revised plans for the old Armstrong plant on Lagrange Street near Centre that would include 48 apartments and 81 parking spaces - compared to the 62 apartments and 52 parking spaces he first proposed in what he now admits was a debacle of a neighborhood meeting several months ago.

Lagrange Street north just past Centre is currently blocked thanks to the latest big rig storrowed at the Needham Line bridge, Cottonmanifesto reports. 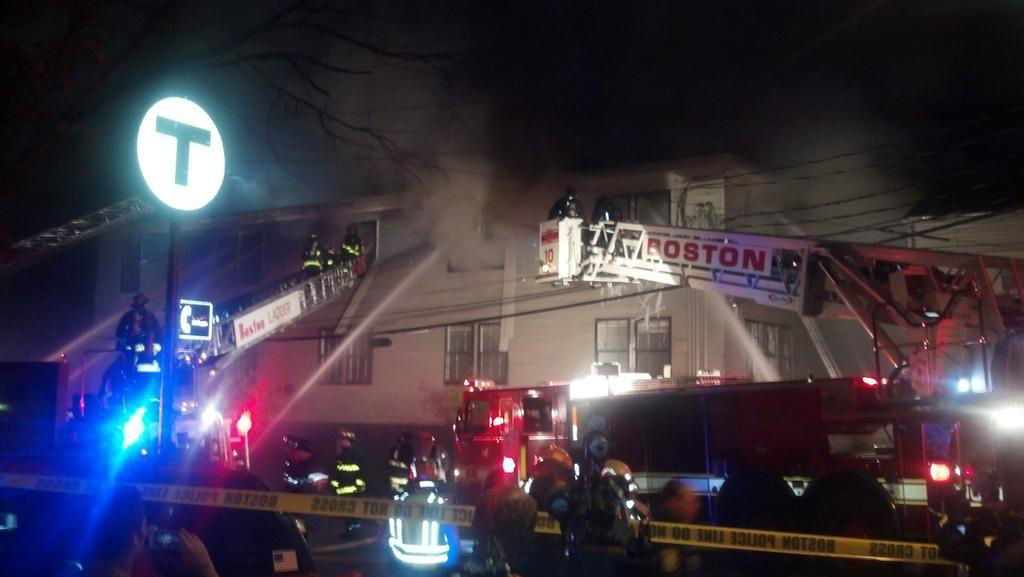 At Lagrange and Centre. Photo by sbBob589. See it larger.

A 5-alarm fire reported around 7:30 p.m. in the former Armstrong Pharmaceuticals complex at Lagrange and Centre streets sent thick smoke into the surrounding streets, where residents had been complaining for weeks about homeless people and teenagers seen going in and out of the buildings.

Firefighters stayed out of the series of connected buildings - which had been marked months ago as off limits in the event of a fire because of a lack of sprinklers and structural issues. The bulk of the fire was reported knocked down around 10:30 p.m., but firefighters remained on scene to watch for hot spots that might flare up.

At the train bridge over LaGrange near Centre Street.

Residents would rather keep fire trap than see 62 apartments here.

A developer who wants to tear down the old Armstrong pharmaceutical factory and replace it with apartments agreed tonight to try to reduce the number of units, maybe make them condos instead of apartments and add more parking - after listening to angry residents tear into the project for more than an hour.

Michael Argiros from Charles River Realty promised to come back before residents with a smaller proposal before seeking formal approval from the West Roxbury Neighborhood Council, the BRA and the zoning board.

The Glass Slipper, one of downtown Boston's two remaining strip clubs, has fired seven strippers since June, when workers found one of the women nearly unconscious from an apparent cocaine overdose in a club bathroom, one of its owners says.

Michael Bennett, co-owner of the Combat Zone remnant on Lagrange Street, told the Boston Licensing Board this morning that several strippers tried slipping drugs into the club even after he ordered doormen to check all employees' bags following the June 29 incident.

A concerned citizen filed this photo of a shelter at the LaGrange Street commuter-rail stop: