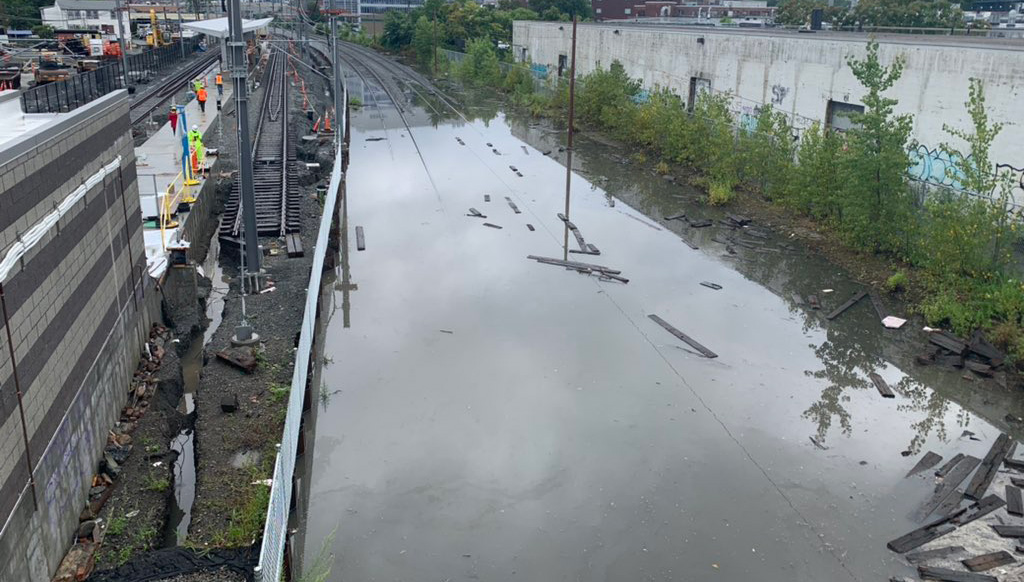 Man struck and killed by Fitchburg Line train in Somerville

Transit Police report an outbound commuter-rail train hit and killed a man on the Fitchburg Line tracks near Beacon Street, around 1 p.m.

Police say the man was "intentionally on the right of way" and that foul play is not suspected.

Teen struck and killed by commuter-rail train in Concord

An 18-year-old was fatally hit just west of the the Conant Street crossing around 11:30 p.m. on Thursday, according to Transit Police, who say foul play is not suspected.

The T started with a general warning around 8:30 a.m. that Fitchburg Line riders could expect delays "due to a combination of minor train defects, switch failure & Freight train," but now they're up to delays of 50 to 60 minutes, at least on one Boston-bound train.

Fitchburg Line riders not at all festive, something wrong on the line makes them restive

Bad news for people heading to Fitchburg this holiday morning: The T canceled train 2403 out of North Station and, after first telling passengers, woopsies, go take an Uber or something, decided to dig up a shuttle bus for the long ride out to Wachusett. The T is also telling passengers who'd hoped to take 2406 out of Wachusett to Boston at 1:15 p.m. to expect to ride a bus instead.

Standing on a bus from Boston to Fitchburg.

Around 11:10 a.m. by an inbound train, Transit Police reports. Mark Allen is on the train and reports:

Very somber feeling in the coach. A prayer for the victim and his family, and additionally, prayers for the crew of the train who are the first responders to these types of incidents.

Transit Police report a man, about 21, was hit on the tracks by a train at the Brighton Street crossing and was killed, around 6:20 a.m.

Transit Police report an outbound Fitchburg train hit and killed a man on the tracks at the Brandeis/Roberts train station around 6 p.m. Police say foul play is not suspected.

A train died near Wachusett station and that has gummed everything up. Or as SMM put it around 7:40 a.m.: Read more.

Fitchburg Line riders wonder why they were chosen, to get stuck on a train that died and is frozen 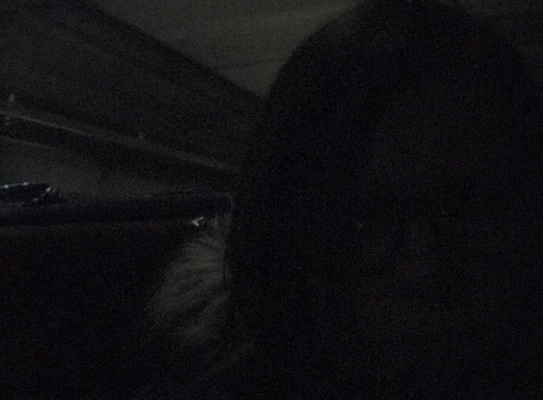 Passengers on an outbound Fitchburg Line train had to endure two hours on a cold, unlit train stuck in Weston this evening - and then 15 minutes standing outside in single-digit temperatures waiting for a relief train. Read more.

One of these days, Keolis will learn to really communicate with riders, maybe

Mark A. Grasso was heading into town on Train 414 on the Fitchburg Line, which pulled into Belmont shortly after noon - and then just sat there. He reports: Read more.

Car hit by train on Old Sudbury Road in Lincoln, MA. Driver escaped the vehicle before the train smashed into it! pic.twitter.com/Q0o0dE7dnT

A car on a Fitchburg Line train slipped off the rails - but stayed upright - outside the Waverly stop around 7:30 a.m. Riders were given the option of waiting for a relief train - which still hadn't come after an hour - or walking to the nearest station. Read more.

Fitchburg Line is wicked slow; goes at a crawl in the snow

The 400 train was canceled and now the 402 train out of Fitchburg is running 45 minutes late, the MBTA reports.

It is operating at reduced speed between Waltham and North Station due to a mechanical issue.

Other lines reporting some delays, but no others like that.

Keolis says its train engineers are now blowing their horns as they approach the Sherman Street crossing starting as early as 6:30 a.m. because it's decided the area is no longer a "quiet zone."

Porter Square is crammed for tonight's voyages of the damned 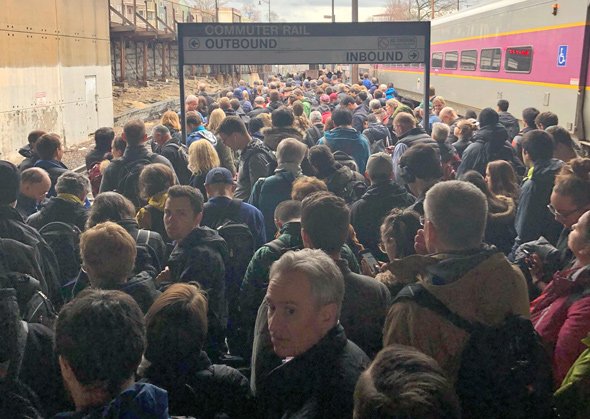 Michael Doyle is among the scores (hundreds? thousands?) of Fitchburg Line riders forced to deboard prematurely at Porter Square this evening due to either some sort of switch problem between there and Belmont or a train that gave up the ghost, depending on which MBTA alert one chooses to read.

Regardless of the reason, "no outbound train has left Porter in 90 minutes," Saul Blumenthal reports.

There were problems on two subway lines, but at least there's no trouble at Hynes

The Orange Line suffered delays due to signal problems at Oak Grove, while the Red Line slowed to a crawl because of a dead train at Davis earlier this morning.

Meanwhile, over on commuter rail, a dead train is causing problems on the Fitchburg Line, which is not one of those coastal routes where that was supposed to happen.

Man hit and killed by commuter-rail train in Cambridge

Transit Police report a 60-year-old man on the Fitchburg Line tracks near Fawcett Street in Cambridge was hit and killed by an inbound train around 12:15 p.m.

Hat's off to this Fitchburg Line rider

Hood Will Hunting was impressed by the way this guy had his commuter-rail pass ready for conductor inspection in the brim of his hat:

This playa right here has me wanting to trade my snapbacks in and upgrade my hat collection.

Woman hit and killed by commuter-rail train in Somerville

Transit Police report a woman, believed to be in her 20s, was fatally struck by a Fitchburg Line train around 6:30 a.m. near Washington Street.

On Monday, a man was hit and killed by a Fitchburg Line train in Concord.