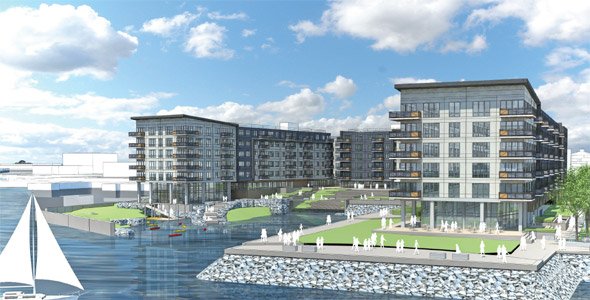 The BRA today approved a 492-unit apartment and condo project at Clippership Wharf in East Boston - some 25 years after the first proposal for the long vacant 12-acre parcel.

Developers said that in addition to the four buildings of apartments and condos between Lewis S, they will also create four acres of open space along the water, including a 1,300-foot walkway on the waterfront, docks, picnic areas and "a living shoreline." One of the docks would be set aside for a possible ferry to downtown; another for kayak launching. The current rotted pilings will be removed.

At a minimum, the project will have 32 affordable units. However, developers Lend Lease Development and Noddle Island Limited Partnership are currently negotiating with the BHA for an alternate plan: Add 48 affordable units to the neighboring Clippership Apartments.

The complex will also include 30,000 square feet of retail space, including a cafe, a restaurant and a fitness center. The developers are proposing 300 parking spaces for the site, which is near the Maverick Blue Line station.

The entire project will start seven feet above existing streets to make the project more "resilient" as the ice caps melt and sea levels rise. All the key mechanical and electrical systems will be housed either on the roof or well above the ground level. Half the roofs will be covered with photovoltaic cells.

another luxury condo complex open only to shadow ghost people.

driving out all the living three dimensional entities that have made east boston what it is.

I'm sure the Saudi princes and Chinese businessmen are lining up to live in East Boston.

look at the render. its literally shadow ghost people.

that was the point.

where are the giant white bunnies?

this could be anywhere in the world.

Talk of the town Border

Talk of the town Border Street, "up and coming" but still down and out!
From McDonalds to Shaws supermarket, It should be demolished next, and be replaced with high end highly priced condo's, something similar to Flagship wharf, buildings that resemble giant cruiseliners. Come on folks, stand beside Shaws and look at the million dollar views, what are the developers waiting for? Pluto to land on the Harbor...anyone with half a brain knows it's the hottest prime real estate in Eastie!

The Atlantic Works building at 80 Border Street is home to three floors of art studios. Please leave it out of your development plans.

---is working on such a project: "Boston East"...old tugboat piers

So how long is it going to

So how long is it going to take them to clean up all the toxic waste, illegal dumping, and sunken shipwrecks before construction can really get going?

The former piers in East Boston are a real mess environmentally compared to the rest of the harbor front.

The T has a problem with falling pieces of metal
The reason for all those Eastie frowns? There's a dead train at Suffolk Downs
Restaurant on Border Street in East Boston wins approval for permanent patio - but without music
Two guys were tooling around East Boston with two guns loaded with a total of 28 rounds; nabbed because their car's window tinting was too dark, police say
This storm was not messing around
On Boston's smallest subway line, the maintenance delays are a bit shorter than a month