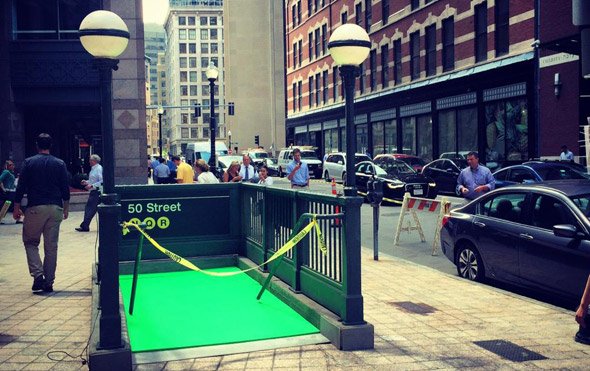 David Schachner marveled at the new subway entrance in front of 125 High St. today - but wondered who ya gonna call to find out when it opens to the public.

Daniel is a good name too, but I usually go by David.

It's not like your tweet wasn't right in front of my stupid face when I posted that. Fixed.

So, how many stops is that beyond Ditmars?

Which line is going to NYC?

Which line is going to NYC?

Marty's going to be pissed when he sees what they did with his AstroTurf...

Will they leave it up overnight?

Folks should go over there and pee all over it for that authentic NYC experience that for some reason can't be filmed in NYC.

I'm curious why this movie isn't being filmed in NYC. I mean, there are many, many productions filming here all the time, and I think the city has made it a lot cheaper to get permits than in previous years.

Apparently Paul Feig is in love with our city. However, they will be shooting some of it in New York. Also - turnabout it fair play, this is payback for The Departed (most of which was shot in NY, subbing for Boston)

What parts of the Departed

were filmed in NYC? All I can remember are the scenes on the Common, in Ft. Point, in Beacon hill.

If I recall, MTA/NYCTA is (or

If I recall, MTA/NYCTA is (or used to be) a little leery of filming in or portraying one of their actual stations - at least when it goes to questions of the perception of security (or lack thereof) or the perception of giving a "how to" commit a murder/terror attack.

Back when I watched TV far more frequently than I do now, I recall a couple of episodes of Law & Order that had to work around that.

One was a murder on an A train in a station. They couldn't arrange filming in any NYCTA station, so they called the Port Authority, arranged to use a station one night (Christopher St, I think), slapped an "A" on a PATH train window, and hung signs for an A train station covering the regular PATH signs along the platform.

Another time the episode revolved around someone firebombing a subway station. Partly because the TA didn't want to show how someone might bomb one of their stations (and partly because showing it would've been complicated, time-consuming and expensive for the producers), they didn't show the interior. They just had Briscoe & Curtis (or whoever it was on the show then) arrive at a chaotic scene at street level - police cars, fire trucks, ambulances, dishevled survivors - at a fictional station (106th St) on the IRT on Broadway in upper Manhattan. They're about to go downstairs to check out the crime scene and the dead bodies when someone from NYFD waves them off and says the area is being screened for HazMat. Problem solved.

Anyone remember Earthquake! in Sensaround?

Kind of like that, but with an olfactory twist!

There are also no

There are also no Ghostbusters...

But we do have Ghost Hunters.

But we do have Ghost Hunters. 213 episodes worth of their adventures in proving that ghosts don't exist.

other end of 49th street station

Nope. The other end is at

There is on this map!

(And yes I'm sure we've all seen this map more times than we can count.)

...find out when it opens to the public

You can tell by the color-coded globe - mixed green & white means that it's an entrance, but limited hours. Solid green is a 24/7 entrance. Red is exit only.

2. Clearly, this photo is first of a new feature - the Boston Library/Archives future photos. Can you tell us where this WILL be? Since 50th St Station is a midtown station, that clearly can't be High St. It's post-Olympics Widett Circle!

Nope. The white bottom half

Nope. The white bottom half doesn't mean anything, and just serves to light up the area. If the top half (or the whole globe) is green, the entrance is open 24/7. If it's red, it's open less than that (maybe part time, maybe exit only).

The MTA globe colors remind me

of when MBTA subway stations had different colored end walls to indicate which direction you were facing. I beleieve the last standing examples of this treatment were at Government Center, and survived until they closed the station last year.

But they can build this in a [email protected]!?!!!

Now it can be told!

Now it can be told!

MTA/NYCTA has finally gone ahead with construction of the long-awaited 2nd Avenue Subway!

They're having it built in Boston and delivered to New York by barge!

The entrance covered in green

Or a greenscreen, blah.

I assume it gets taken down