The City that Always Sleeps: Think of the children, downtown residents group cries in battle against late-night tacos 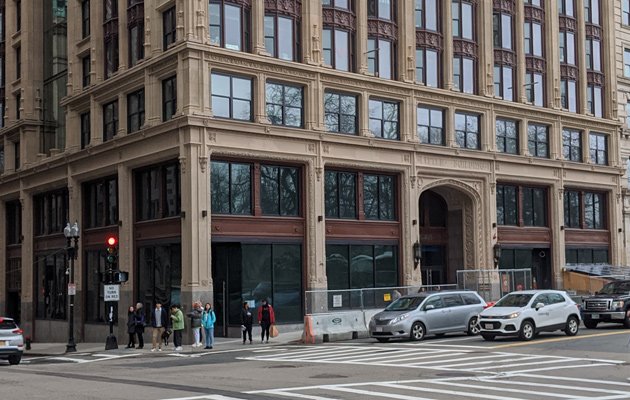 Risky business? Taqueria would be on the right side of the building along Boylston.

The Boston Licensing Board could vote tomorrow whether to let a proposed taqueria in Emerson College's revamped Little Building stay open until 2 a.m. or whether to back a neighborhood association, the mayor and the local city councilor, who say a midnight closing would protect area students and residents from dangerous knockabouts drawn like moths to late-night Mexican food.

At a hearing today, representatives of the Midtown-Park Plaza Neighborhood Association said they were mainly thinking of the 1,000 Emerson freshmen who live in the Little Building, at the corner of Boylston and Tremont streets, in the heart of New England's largest city.

One member said that around 11:30 the other night, while walking home from Tufts Medical Center, she eyed two large groups of men just standing on the street, one group on Beach Street, the other on Avery Street. Left unsaid, of course, was the implication of what they would do to all those dewy communications majors at 2 a.m. should El Jefe's Taqueria be allowed to stay open that late.

But El Jefe's owner, John Schall, who has an outlet in Harvard Square that is open until 4 a.m., said, if anything, staying open until 2 a.m. would make the area safer, because it will mean more eyes and light on the street.

He committed to hiring a private security guard to police the 36-seat restaurant in the later hours and said and that both the guard and the manager on duty would refuse admission to anybody appearing under the influence or seeming to be looking for trouble.

Plus, the restaurant would have an entrance/exit right into the Little Building, separate from the public entrance, so Emerson freshmen would not even have to risk their lives on the dangerous streets of downtown Boston just to get something to eat, he said.

Also, unlike the Winter Street Tasty Burger, which scaled back its own proposed 2 a.m. closing time in the face of opposition from Midtown-Park Plaza, El Jefe is not seeking an alcohol license.

Schall added that by staying open until 2 a.m., he would be filling a need for both Emerson students and other non-creepy denizens of the night, such as hospital workers.

"College students eat between midnight and 2 a.m. and that's just a fact," he said.

Board Chairwoman Kathleen Joyce asked Schall if he'd be willing to start out with a midnight closing time and then come back after a few months to seek a later closing time.

His attorney, Cailin Burke , said Schall would stick to his 2 a.m. request, both because he sees a business need to stay open that late and because there are at least 11 other places within a quarter mile of the corner of Boylston and Tremont that are open late - including New York Pizza on Tremont Street, which is open until 3 a.m. Thursday through Saturday, 1 a.m. the rest of the week.

Aides to both Mayor Walsh and City Councilor Ed Flynn said they would only support Schall's request for a food-serving license if it had a closing time of midnight, for the public-safety reasons enumerated by the residents group.

Were these people never college students? A campus eatery should be allowed to stay open as late as there is demand (especially during mid-terms and finals!) It sounds like the owner's offering to do everything right.

Sometimes I need tacos near 2am so I definitely approve of this closing time. And maybe this is a radical idea, but I also approve of this place being open until sunrise if a private security guard is required after hours to keep the area safer!

It sounds like someone did not make the correct political campaign contributions.

I have often thought of opening a small restaurant business when I retire from my current career. Boston will not be on my list of places to do so.

Plz don't go breaking Boston's cold, heart, all we do is eat in restaurants.

How does the college feel about it?

EC police would likely help handle any bad situation that arose here. If the college isn't concerned, then I don't see the problem here...

It's unbelievable that a city councilor and the mayor can both point to the streets being unsafe at night as a reason to suppress business without realizing how bad that makes them look. Hey Walsh, if the streets aren't safe for college students to walk around at night, maybe you should be doing something about that?

The pearl clutchers who think a late night restaurant would be dangerous in that area probably would have gotten the vapors in the days when the Combat Zone was right around the corner from there. And the drinking age was 18 to boot.

My UMass Boston math classes were upstairs from the Silver Slipper. It was open until 2...

Sami's on Longwood Ave in the Medical Area was a useful resource for MassArt students doing all-nighters in the 90's. absolutely nobody lived there at the time.

The city should not regulate closing hours at all

for any establishment that is not serving alcohol.

Also, anyone who can afford to live in this so-called "neighborhood", who is not a college student, is an entitled 1%-er.

....are not entitled 1%-ers.
But I agree with you otherwise.

Does this neighborhood association cover Chinatown?

They have their own organizations, which I think are totally separate from the "Midtown-Park Plaza Neighborhood Association". I think of Chinatown as a separate neighborhood, which already has late-night eateries.

Having been to an MPPNA meeting not being a member, I can tell you it is the epitome of pearl-clutching and "I know what is better for you than you."

Do you not believe in zoning?

How can a business cause a hardship at 3 am

if it does not serve alcohol?

I live 1/2 block from a 24-hour 7-Eleven in North Cambridge. I consider it an asset to my neighborhood, and I spend more money there than I really should.

Half a block is not the issue

On the other hand, to have, at 3AM, 15 feet from my head as I try to sleep, a door frequently opening and closing, people talking loudly as they come and go, and restaurant exhaust fans runnng, would be a major quality of life issue.

I have no problem with a business operating 24/7 in a business district, just not in R1 or R3, because that’s not what the residents signed up for when they moved In.

I suppose half a block would be an issue if the business was on an otherwise quiet side street, had ventilators running, or a busy parking lot or a lot of vehicle traffic, etc.

This is a business district

Boylston Street, Tremont Street, Washington Street -- these are places for businesses. Residents are there too (including the Emerson and Suffolk students), but they generally came later.

We weren’t discussing this particular case

We weren’t discussing this particular case; we were discussing your claim that government should never regulate business operating hours. I don’t have a position on this case; 2AM tacos on Boylston st adjacent to a college dorm seems fine to me, but I don’t live there

I hope a student or two tell

I hope a student or two tell these crusty old turds to stfu and stop speaking for them while attempting to deny them services in their own building. Move to a cemetery in Florida already, Midtown-Park Plaza Neighborhood Association members.

He was sleeping in his car.

He was sleeping in his car.

In my student organizing days

In my student organizing days, I encouraged dozens of students to write to the licensing board of a nearby city to support an eatery's late night hours.

The board still decided to back the *one* crusty resident who asked for an earlier shutdown.

Today that resident is no longer with us. Neither is the eatery -- it couldn't make it with the shorter hours. And neither are those particular students. Today's students at that college have no idea that there used to be late-night food so close.

Broken record but it's well

Broken record but it's well past time to tell these neighborhood groups and associations to pound sand. They are unrepresentative, unreasonable, and just plain ridiculous. That is especially true downtown. Enough of this nonsense.

This is the definition

"At a hearing today, representatives of the Midtown-Park Plaza Neighborhood Association said they were mainly thinking of the 1,000 Emerson freshmen who live in the Little Building, at the corner of Boylston and Tremont streets, in the heart of New England's largest city."

What do those ADULT students think? I bet they think, damn it'd be great to have a taqueria open until 2am in my building.

On forfeiting it’s streets over to criminals after 10pm/midnight.

If no tacos, we must cancel Tuesdays

But seriously, Herrera's would be better choice

If it was a Dunkin donuts it probably would be approved without question. And the DD is far more likely to attract sketchy people.

I wouldn't be so sure

As far as I can tell (the official store locator only displays ten locations for the location you enter which is obviously inadequate for downtown Boston) there aren't any Dunkins near there which are open to midnight, let alone 2am. (Not Starbucks, either.)

Also that location used to be a Dunkin Donuts before they did renovations on the Little building.

Are there actually residents there?

There's an apartment building literally right across the street from the Little Building. Plus, Tremont on the Common and another building basically next to that, a bit closer to Boylston. And downtown's side streets are now full of former offices converted into chic new condos, where people who want to live right in the heart of it all have - except, apparently, for one of the things that most world-class cities have, i.e., life after dark - live their lives of apparently quiet desperation.

Why do they care?

That's not even a residential heavy neighborhood. I'm sure plenty of Emerson kids are walking down the street already to eat at South Street Diner at all hours. They aren't even asking to stay open later than the bars/clubs. The increase to foot traffic will be extremely minimal.

These people need to get a hobby.

THEY'RE NOT EVEN SERVING

THEY'RE NOT EVEN SERVING ALCOHOL

jesus christ, let a person eat a couple tacos at 1:30.

The approval process is so

The approval process is so broken. There needs to be consistent rules and process around operating hours for new businesses. There should be standard hours that all businesses in a neighborhood are granted. If there are problems, those hours should be cut back, temporarily or permanently. There could also be a process for extending the hours if the business owner desires, for example after 6 months of operating without any issues, the extension would be granted. The lack of predictability due to the "loudest people in the room" and fears of neighborhood associations is really getting out of hand.

Why would you live downtown with children?? That's definitely NOT a place to raise children at all!! Think of moving to a much quieter place in the city if that's a problem or, move to the suburbs!