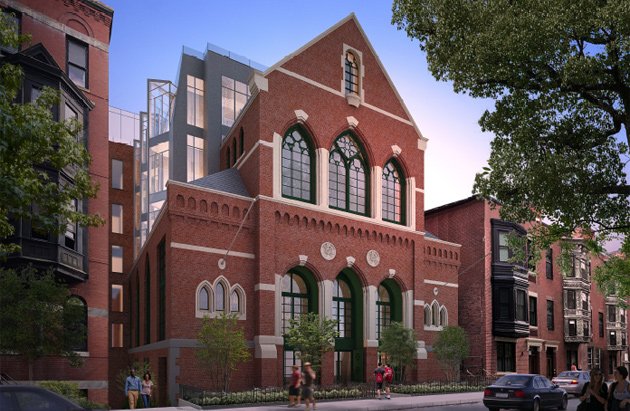 A Lynnfield developer has filed plans with the BPDA to turn the former Our Lady of Victories Church on Isabella Street in Bay Village into 26 condos, with four of them duplexes and one a triplex.

KEMS Corp. is basically proposing a, $18-million gut rehab, in which the front and side facades would remain largely intact, but with the insides scooped out and a new, more modern structure placed in the rear section of the church to add more space for the unit.

The interior structure of the church will be removed, and a portion of the existing roof and upper nave removed. The existing vestry and boiler building at the northwest portion of the Site will necessarily be demolished. Through research into the history of the church, it has been discovered that the existing front steps are not original to the church design. To create accessibility for the building, the existing front steps will be demolished, and the major arches will be cut down to grade at the front. Gothic arched windows at the east, west and northern sides of the church building will have their sills cut down to allow for their utilization by the new residential units. The existing sloped roof at the apse will be removed, and replaced with sloped glazing of the same geometry.

Three of the units would be sold as affordable.

The company is proposing 21 parking spaces in a ground-floor garage.

In addition to the BPDA, the project also needs the approval of the zoning board and the city groundwater trust. Once permitted, KEMS says construction should take 18 months.

Before The Lectures That There Are T Stations Near Here

The parking garage in the basement is a great idea for use of that space.

The basement is below grade for most of the site, that is below the street level of Isabella Street. Therefore if you put any units on the ground floor in the back of the building and the parking lot which abuts the property to the east is developed, you will have units that will never get light. If you want to live like that, go ahead. Anyone paying $2 million plus for a unit doesn't want to have a unit with permanent twilight.

More good news for housing in the area. The parking lot next too and behind the former BCAE is going to be filled in soon with 9 three-story townhouses. That is all approved. Surface parking becoming rarer and rarer is good for the streetscape.

For a pic of the former

It Was The French Church In Boston

Hence, the really, really nice Second Empire Interior. Thanks for the pic.

It is a shame that these interiors are getting gutted. St. Vincent's in South Boston has had most of its marble and by now should have its windows out.

Like Torahs that are damaged, the RC Church actually buries unused old altar pieces. Some altar pieces at St. Vincent's are being transferred to other churches as are a lot of the windows.

I used to go to OLV on Holy

I used to go to OLV on Holy Days when I worked in that area. Beautiful church, and the priests there were solid. For my own selfish preferences, there's a couple of other churches (in "work-area" Boston) that I would have urged be closed before them, but...
I loved the windows there- the linked article says something about painted glass, not stained glass?
A couple of other good nuggets from the linked article. The front steps weren't original - good! ...and the bit about the surprise discovery that there is steel in some of the columns!
---
I'm not 100% sure about the "burying unused altars" part.
Yes, they can be, I'm sure, (especially after relics are removed) but...
Just about the only references one hears to burying altars and such are if you read the liturgy war blogs and get the mixture of fact & hyperbole about post-Vatican II liturgical "wreckovations" where beautiful fittings were ripped out as if by thieves in the night and cast into unmarked landfills (like the chunks of the original Penn Station are somewhere in the NJ Meadowlands).
Leaving aside tastes in architecture or liturgy, it's a waste on several levels to destroy stuff like that (even if you are removing it).
Much more common these days is that anything that can be structurally preserved in removal is reused somewhere or warehoused in hopes of sale & reuse. Several of the fitting of the new Seaport Chapel come from closed churches. My suburban hometown parish built a modern church a few years ago with beautiful fittings from a closed church that they selected from a salvage warehouse.

Painted glass was the

Painted glass was the dominant form of what most people think of as stained glass from the late 15th to mid 19th century; the windows at the main level of the nave of Holy Cross Cathedral are another example of painted glass. Painted (annealed) glass offered the ability to produce panels (which could be thinner and therefore lighter in weight and placed less burden on the structure's statics) instead of pieces, with almost jewel-like color saturation, and with painterly details that become a la mode in the Renaissance and thereafter.

The recovery of older stained glass - where chemicals were mixed with sands to produce inherently colored glass - was a recovery in the mid-19th century, and became more available later in the century. Charles Connick's studios in Boston were among the foremost for that recovery in North America. Connick's studio provided the windows for the sanctuary of Holy Cross Cathedral (replacing the original painted glass windows there) and the lower north/south eastern windows of the transepts, so one can see the differences in the types of windows. There are people under the misimpression that painted glass was inherently poorer/less than older stained glass, and that comes from a lack of understanding of the history and evolution of colored glazing. Holy Cross Cathedral had a fully complete window program in place within years of its dedication, so its styles are relatively compact in terms of time/trends. St Patrick's in NYC, by contrast, took a couple of generations to complete its window program and thus has a much more diverse array of styles/trends in glass.

It was really convenient for Holy Days since my office is in the Hancock. I also really enjoyed the Marists - and they offered a lot of social services to various groups in need. I often went to the mass that started just after noon (12:05?) when I needed some peace and quiet in my work day.

It was a beautiful church inside.

Wasn't there an episode of This Old House where one of the little "field trips" was to see a converted church residential space in this neighborhood? This space in the article isn't being used as residential at the moment though, right? And I don't think this one is it either; I think it may have been a smaller overall footprint, and more closed in on both sides as it sits on the street. I can picture the interior; a lot of white, built ins, and a grand piano if I recall. Anyone know what street that was?

I haven't watched them

I haven't watched them regularly recently.
Was it a church that was their project house that season or a visit to some other renovation/remodel to see possibilities?
I remember - cue Jerry Trupiano "way back!" - that the show remodeled a former church in the Back Bay years ago, but I don't recall them doing any other churches (at least in Boston).
If it was someone else's older remodel they were visiting... There's converted former Catholic churches nearby (Harrison, West Broadway) that I can think of, and I'm sure several other former church buildings of different denominations that I'm missing, especially as you move into the South End. I'm drawing a blank on what it could be in Bay Village.

Not the project house

I like that show possibly a little too much and know where most all of the project houses are. ;-)

I want to say it was a one-off interior designer showing her own home to discuss design ideas for the project house.

(I see you edited your comment, so I'm replying to the second half...)

The only church listed as a project house was in San Francisco:
https://www.thisoldhouse.com/project-houses

Nice job on finding the

Nice job on finding the location you remembered.
-
My short-term memory must be shot, because I have no idea what edit I made to my comment.
-
My long-term memory isn't doing much better, because that nice reference link you found doesn't include houses I thought I remembered them doing.
I thought they did something in the Back Bay, maybe at/near the former church at the corner of Beacon St and Mass Ave
https://www.google.com/maps/@42.3507413,-71.0894358,3a,60y,90t/data=!3m6!1e1!3m4!1sxEHwn74a_sUnWuc5OFRfag!2e0!7i16384!8i8192?hl=en
- and -
I was sure they worked on a house out in Framingham/Natick, maybe Framingham Centre, but no indication of that, either...
-
Maybe it was locations they visited for examples of work, or in later years for Ask This Old House segments.

Okay, rereading their list... what I thought of as Framingham was probably their Wayland house.

I like that look of the modern inside the old facade

How do you feel about this one down the street?

When I visited Pittsburgh, I

When I visited Pittsburgh, I saw that old churches had other uses - ie a brewery with beer brewing in the alter and another old church was a night club.

Not knocking the plan, but it

Not knocking the plan, but it's a shame they'll be demolishing all the stuff in the rear of the building. That alleyway back there, the little "secret" door, etc. has always been one of my favorite parts of the neighborhood. It's the sort of fractal detail that makes old urban areas so wonderful, and that's so utterly missing from all the freshly-built places nationwide.

The Lucas in Boston

This looks similar in concept to what is now The Lucas in the South End. I wasn't a fan at first, but it has grown on me quite a bit. Some of the units also got some unique features given the window shapes.

Edit: Does my Google Maps link not show up?