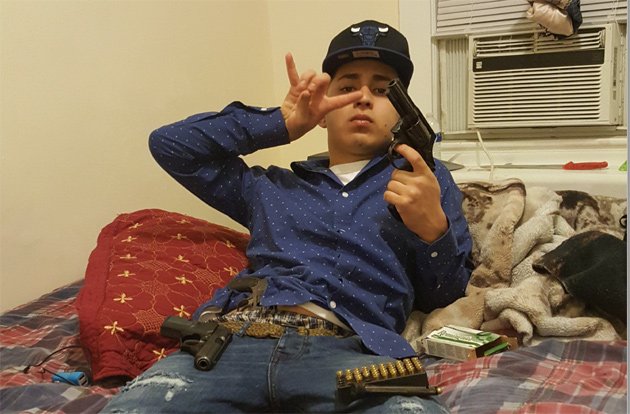 Not directly implicated in any of the murders that led to the arrests of dozens of local MS-13 members in 2016, and deemed too young to be indicted with his homeboys, Cristian "Duende" Alvarez Hernandez was turned over to Immigration for return to his native El Salvador.

But released on bond, he took advantage of the power vacuum in the MS-13 Everett Locos Salvatrucha sub-gang and was making moves to advance in the gang when he was arrested in 2017 on RICO and gun charges. Today, a federal judge sentenced him to ten years in federal prison - with credit for the nearly five years he has already spent locked up - followed by deportation to El Salvador or three years of probation, whichever comes first. He had pleaded guilty in September.

According to a sentencing memorandum submitted by federal prosecutors, Alvarez, now 22, was a young MS-13 member when he had some sort of argument in a hallway at East Boston High School with Wilson Martinez, 15 and a member of the rival 18th Street gang.

That, authorities say, led to a series of events that ended with Martinez dead on Constitution Beach in East Boston on Sept. 7, 2015, his body stabbed 33 times, his head smashed repeatedly with rocks.

Although Alvarez did not take part directly in the murder, he played a key role beyond the initial argument, the feds say: He set up a fake Facebook page for a supposed teen-age girl who wanted to meet Martinez, which another MS-13 member then used to lure Martinez to his death.

Alvarez also came close to actually participating in another teen's murder - which would have made him eligible for a gang promotion.

Five months after Martinez's murder, local MS-13 members plotted to kill another teen who was supposedly in 18th Street - using the same Facebook invitation ploy. Prosecutors say Alvarez was invited to the murder, but he fell asleep and missed it - as did another MS-13 member. MS-13 members who remained awake surrounded Cristofer Perez de la Paz, 16, of Chelsea, on Falcon Street in East Boston on Jan. 10, 2016 and repeatedly stabbed him, except for one member, who emptied his gun into the teen.

In their sentencing memorandum, prosecutors said Alvarez did take part in violent attacks on 18th Street members, including hitting one in the head with a large lock at the end of a chain, stabbing another one with a knife and attacking a third with a machete.

Despite multiple run ins with law enforcement, despite being in immigration custody (sometimes for months at a time), and despite witnessing numerous fellow gang members get arrested and prosecuted, the defendant remained undeterred and resolute in his commitment to MS-13, returning to the gang lifestyle almost immediately upon each of his releases from custody. That lifestyle not only included associating with gang members but possessing weapons, the latter of which was further evidenced by images on the defendant’s phone (including pictures of firearms and ammunition atop the defendant’s bed), the incidents underlying the defendant’s immigration detentions, and even the defendant’s arrest in this case. Specifically, at the time of his arrest, the defendant possessed over 150 rounds of ammunition and at least three firearms.

The defense sentencing memo says Alvarez was really a victim of circumstance.

Born in La Palma, Chalatenango, El Salvador to a poor couple, his father abandoned him as a baby and his mother left for the US without him when he was just 5, leaving him to be raised by his older sister, just 9. His sister got pregnant at 11 and could no longer care for him. When he was 10, he was raped at a local church event.

He eventually made his way to the US, crossed the border and wound up in East Boston, where his mother and other siblings lived and where he enrolled in high school but soon found himself "constantly bullied for being small and having large ears" and because he did not speak English well. MS-13 members, like him, from El Salvador, provided him the sort of support and camaraderie he found nowhere else.

The attorney continues that Alvarez has shown during his time at a federal prison in Rhode Island that he can and is making progress:

Mr. Alvarez Hernandez has demonstrated that he will make effective use of correctional programs and trainings that are offered to him. He is actively taking courses to obtain his General Educational Development (GED). He is also receiving academic tutoring through the Harvard Organization for Prison Education and Advocacy (HOPE). He has also completed the following coursework at Wyatt: GED Prep, Anxiety Workbook, COVID-19 Anxiety Workbook, Personal Boundaries, Sleep Problems/Insomnia Issues, Substance Abuse Workbook, Adjustment to Incarceration, Criminal Lifestyles, and Basic Kitchen Standards. ... Mr. Alvarez Hernandez has also registered for a treatment program at Wyatt Detention Center and has expressed an interest in participating in drug treatment.

Mr. Alvarez Hernandez has demonstrated redeemable qualities and positive contributions to those around him. As noted in the letters provided by friends and family as well as documentation obtained from East Boston High School, where he was a student prior to his arrest, Mr. Alvarez Hernandez has demonstrated tremendous perseverance and has potential to be a productive member of his community. Letters of support are attached as Exhibit D. For example, Mr. Alvarez Hernandez has worked as a line cook at Wyatt Detention for the past year and a half. He has received impressive performance reviews. As noted by William Anderson, the Food Service Director at Wyatt Detention, Mr. Alvarez Hernandez "has been diligently working in the kitchen" and is "always willing to assist when needed and goes over and above." Perhaps most importantly, Mr. Anderson notes, "Mr. Alvarez has remained respectful to all staff and the detainee population."

It’s hard to look more foolish than a little boy mean mugging with a gun.

Right back to buried ledes

Born in La Palma, Chalatenango, El Salvador to a poor couple, his father abandoned him as a baby

soon found himself "constantly bullied for being small and having large ears" and because he did not speak English well. MS-13 members, like him, from El Salvador, provided him the sort of support and camaraderie he found nowhere else

Well, what a surprise: when we exclude someone and drive him from our midst, our enemies will all too happy to take him in.

Indeed, the defendant has

Indeed, the defendant has been picked up by immigration authorities no less than four times.

This is the real failure. Why wasn't he brought home by USCIS after the first time he was picked up for unlawful presence? If you're in a foreign country unlawfully, you get sent home.

If you're in a foreign country unlawfully, you get sent home.

Walk me through exactly how this works. Where's "home"? How does he get sent there? Who's responsible for keeping him there?

Replace "home" with "away". as in, "if you're in a foreign country unlawfully, you get sent away."

Ok, replace "home" with "away" and answer the questions.

You clearly know the answer to how this could have been prevented. Spill the beans and quit doing this boring dance.

Walk me through exactly how this works. Where's "home"? How does he get sent there? Who's responsible for keeping him there?

4. Q: Does it matter where he goes? A: Not really, hopefully it is a place where he isn't going to be able to participate in the murder of American children.

I don't know how to tell you this, but neither the United States nor El Salvador have a door. And you know what, it's hard to keep any door closed, no matter how metaphorical, when the country in question is just barely, maybe, starting to have a functional government.

While I don't dispute the validity of your emotions, your "solutions" are childish and unworkable.

He was a kid. The post clearly states his mom and siblings were in Boston. They are his only home. He was raped and survived multiple traumas in El Salvador. He was looking for a place of relative safety with his family.

He needed more support in learning english, treatment for trauma, and healthier social connections willing to provide him a path towards better opportunities. This is a failure of the system, but not in the ways you're thinking.

"Home" is your country of

"Home" is your country of citizenship, or legal permanent residence.

Deportation is not sending people away as much as returning people "home".

Sounds like you and Bob need to get on the same page.

"Home" is your country of citizenship, or legal permanent residence.

What if that country doesn't exist any more?
What if they will not take you?
What if you'll be persecuted, imprisoned or DOA?

You call yourself a "Refugee", you should know these things.

Incredibly sad to hear, this

Incredibly sad to hear, this child is forced to grow up too fast through trauma, excluded in society, then adopted by a violent gang for lack of any other social connections. It is a double tragedy that we don't catch these vulnerable young people and integrate them in our communities before their lives are irrevocably altered by violence.

Let's not say an 11 year old "got pregnant." If she was 11, she was raped. His sister was impregnated at 11 and could not take care of him.
This story is so sad in so many ways.