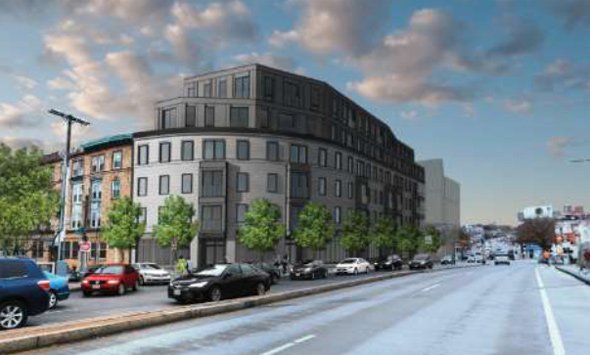 UPDATE: City Realty says the murals in Allston Hall can be moved and that it's talking to Allston Main Streets about how to relocate them.

City Realty wants to replace a series of buildings around the intersection of Harvard Avenue and Cambridge Street with five new buildings and a gut rehab of a sixth that would include a total of 334 apartments and condos as well as new first-floor retail space.

The company today filed plans for its $121-million Allston Square project with the BPDA. Among the key elements: Tear down the Jack Young building on Cambridge Street to make way for a six-story 65-condo building; raze the long-vacant single-story curved building next to it at Harvard Avenue or a six-story, 77-unit building; and wrap the auto-parts store at 415 Cambridge with a 101-condo building.

The company would retain the historic Allston Hall at Braintree and Franklin streets and turn it into nine residential units with first-floor retail space, but the plans call for removing the murals in the window frames of the top two floors that feature Allston residents, including the fabled Mr. Butch. However, City Realty proposes a sort of abstract strip of art along one side of the building, at least on the part that would still be exposed after construction of six-story building next to and around it.

The objective of the overall site plan is to create both a physical and visual connect between all sites, creating a clear urban promenade while also fitting within the existing urban fabric. This is achieved by creating a series of open spaces between all sites and incorporating artwork in both mural and sculptural forms, evoking a feeling of constant exploration and discovery of new, unexpected spaces. Being mindful of the vibrant artist community and history of the Allston neighborhood, the project team has engaged local artists to create both interior and exterior exhibition spaces that allows the public to be part of the overall narrative of the development. The Proposed Project will completely revitalize this section of Cambridge Street and will bring necessary residential housing to an underutilized industrial corridor. The site is attractive due to its access to MBTA stations and the location’s close proximity to a variety of shops and restaurants.

The company, which hopes to begin construction next spring, is proposing 237 parking spaces for the 334 residential units.

The company's proposal for a new gateway to Harvard Avenue, currently a long strip of low-rise, early-20th-century commercial and residential buildings would be a modernistic six-story, 69-feet-high structure with 77 residential units and 48 parking spaces: 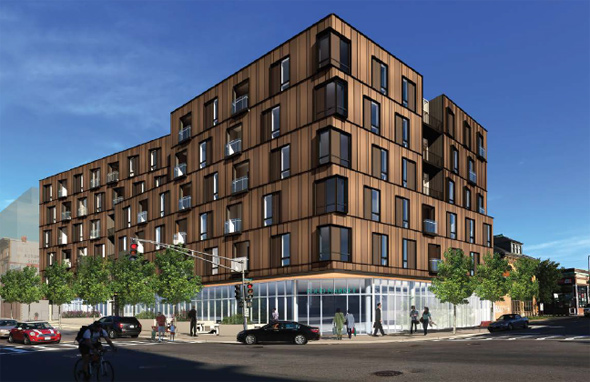 In its filing, the company says that far from overwhelming the rest of Harvard Avenue, the building would serve as a visual funnel, focusing attention on one of Boston's major areas:

Given that the building will be highly visible from a variety of vantage points along Cambridge Street, Harvard Avenue and from the Massachusetts Turnpike, it will function as an icon to showcase the arrival of Allston as one of Boston's key neighborhoods. Through carefully selected façade materials and deliberate massing strategies, the proposed project will be a monumental yet highly contextual addition to the neighborhood. The massing and exterior skin of the building create a new, unique structure that captures the industrial aesthetic of the neighborhood while at the same time directly relating to the immediate context. The massing reacts to various site “forces” and view corridors, which in turn cause the envelope to break away from the “street wall” on Cambridge Street, creating a new hardscape plaza for the residential entry and two adjacent retail components.

Allston Hall would be rehabbed and a six-story, 62-condo building with 46 parking spaces next to it: 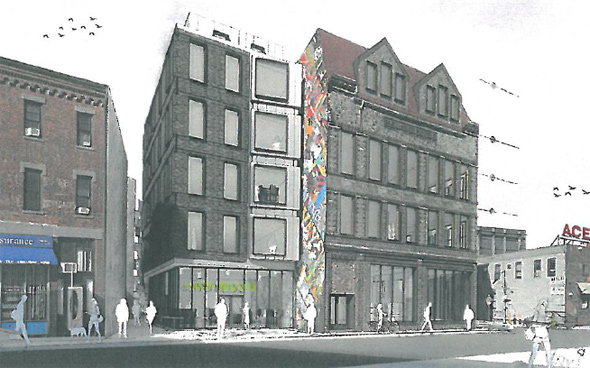 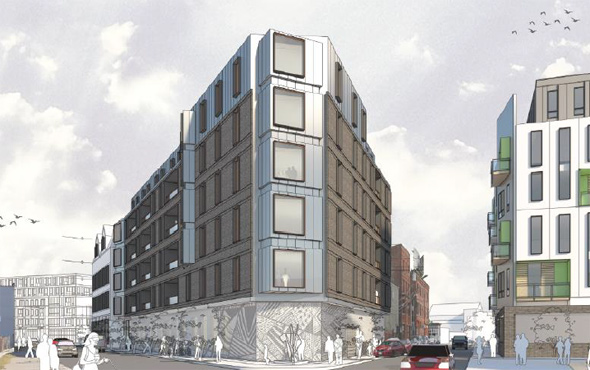 The company would put up 101 condos and 102 parking spaces at 415 Cambridge St., wrapped around the Advance Auto Parks store: 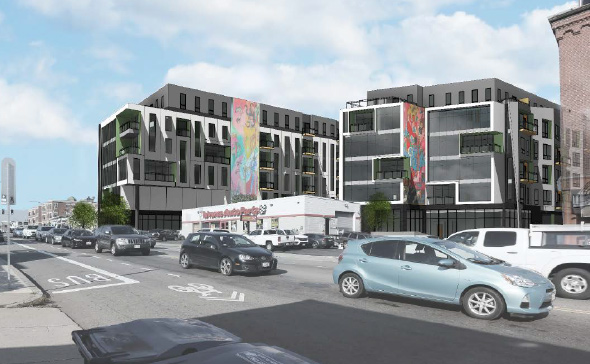 A three-family house at 16 Highgate St. would be replaced with a five-story building with 20 units and 6 parking spaces: 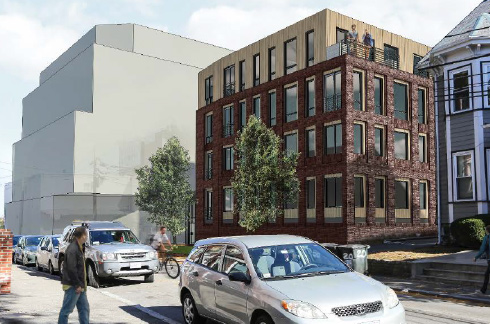 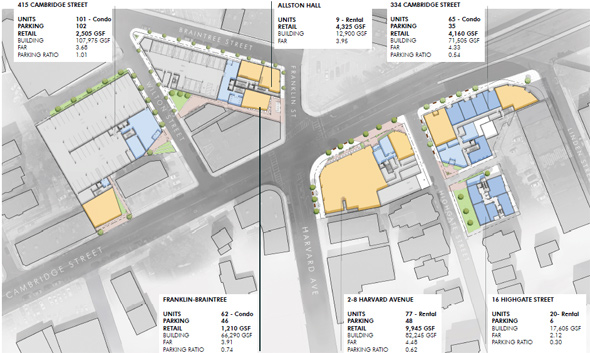 In addition to BPDA approval, City Realty will also need to win a number of variances from the zoning board.

And all those people will be able to use West Station for an easy trip downtown in 2040, thanks to our forward-thinking politicians!

it is a nice short walk up

it is a nice short walk up Braintree St. to Boston Landing station

It would be even better for

It would be even better for these people if they rebuilt the original station at the Regina Pizzeria building. That's where it belongs.

you wouldn't have liked it around here anyway.

I remember when he died

Did a whole moment of silence for him at trivia and everything.

lived there for many years... its charms are grossly overrated and its underside is repulsive. give pratt street - brighton ave back to the working/middle class and boot all the obnoxious college kids back to their campuses.

Going out of business FOR REAL?!?

Does that mean that that rug store which has been going out of business for the past 10 years
will actually do so?**

**It's been a while since I've been past that corner. It may actually be gone already, but really, for *years* it had a going out of business banner out front.

I remember stopping in for the sale back in the 90’s.

It's enough to give rug merchants

It's enough to give rug merchants a bad name.

Would you believe, late 80s even?

Surface parking? Bah. The street level is made for buildings or parks, not pavement for storing steel.

As much as I agree with this,

As much as I agree with this, if you look at the overhead photos the street parking is for the most part where there is already street parking. Sure, there is more of it behind the Allston Hall building, but they are replacing the surface lot at cambridge and highgate with a building with retail space. I would rather have more retail space on Cambridge St where people would walk than industrial storeage on a back street.

Who are some of your favorite

Who are some of your favorite developers?

I would venture a guess and say that Harvard Ave from Comm to Brighton will some day look like Boylston from Ipswich to Park Drive. So enjoy it while it lasts, kids!

It was already over in my book.

Because it's the crown jewel of Allston.

Get in the Zone!

Please post some images of the Mr. Butch mural in situ...

Please post some images of the Mr. Butch mural in situ...

I'm not finding any when I search

It's not really a Mr. Butch mural, although Mr. Butch was one of the featured denizens of Allston portrayed. Then again, so is Jim Gentile of the Pet Shop, and I don't think anybody thinks of it as a "Jim Gentile mural." Here 'tis. Easy to find if you use "Allston Hall mural" as a search term and go to images.
https://seenaroundboston.com/painted-windows-on-allston-hall-block-build...

try google maps, street level and you can see it easily next to Ace Ticketing...

Not pictured: The pizza we got at Pizzeria Regina.

That used to be a super fun place to take kids, who loved watching the multitude of trains going back and forth for the yard. If you went on any night of the week tons of families with 1+ kids would be there. Still get the commuter rail I suppose, and I bet regardless of the diminished rail traffic, it's still very popular for families in the area. So much better than when it was Sports Depot and seedy as hell.

Are you from Weston?

Oh, we definitely asked for a window seat

Only one train came by, but it was pretty dramatic - inches from the window.

This area needs some TLC for

This area needs some TLC for sure, but with the exception of that first building, good God those proposed buildings are hideous!

Signs soon to be put up for

Signs soon to be put up for those crawling in traffic on Cambridge Street:

IF YOU LIVED HERE

if you lived here, you'd be in an ugly building now.

Nothing like infill to make the City better. Walkable, more retail, more people on the street, and a better connection to Lower Allston. We need this yesterday

None of This Makes Any Sense

How would this make Cambridge street any more walkable? And who said more crowded sidewalks and more stores is automatically an improvement? And re a better connection to Lower Allston - they're not proposing building over the Pike.

Maybe they should add a and

Maybe they should add a and dedicate a Mr Butch plaque on this new building.
Me Butch use to play air guitar left handed outside of the Rat in the 1980s.

Why no love for any other

Why no love for any other crazy homeless people? Anyone remember "Red"?

Mr. Butch was many things, but he was not usually angry. People genuinely cared for and tried to help him out. Red?

So now Allston Square is

So now Allston Square is going to be a residential real estate development? I thought it was going to be Barry's Corner. https://www.universalhub.com/2014/does-allston-need-allston-square

Love the Transportation Analysis page.. because the bus routes that travel on the Pike have stops on the Pike... right?...

Troublesome Allston club is closed for good after latest gun incident outside, owner says
Is Dave Letterman out of retirement and working for a company that owns a billboard in Allston?
Throwing down, Allston style
When the walls come tumblin' tumblin' down
Great Scott won't be moving into old Allston train station, but American restaurant likely will
Glory be: Boston finally getting the 'spasm of design expression' its skyline deserves, architects exult