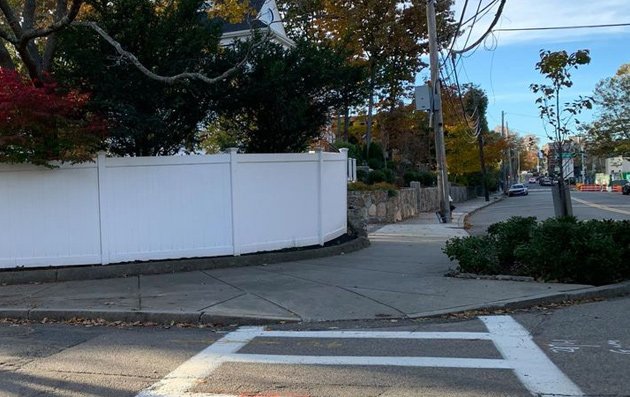 Note the "bulb out" around which the motorist had to drive to hit the pedestrian. Photo by Brookline PD.

Brookline Police report that Patricia Arellano, 63, of Keswick Street in Audubon Circle, was walking across Downing Road at Washington Street when a driver making a right turn from Washington onto Downing hit her around 11:20 a.m. last Friday.

Police say she was transported to Beth Israel Hospital, where she died that night.

The operator of the motor vehicle remained on scene and was fully cooperative throughout the investigation. She had been travelling on Washington Street and turned right onto Downing Road when the accident occurred. She was cited for failure to stop for a pedestrian in a crosswalk.

Randy Parker, a nearby resident discusses Arelleno's death and past efforts to get the town to do something about traffic conditions along Washington Street between the Brighton line and Beacon Street.

As many know, the speeds on Washington Street have been TOO HIGH FOREVER. A group of us formed a traffic calming project in the 1990s and spent a lot of time, got funding support from Sen Cindy Creem, but ultimately only got very small measures of traffic calming enacted.

We were thwarted in doing more. We were told “Wash St is under state jurisdiction”, “it’s a main artery”, etc. But these rules that blocked us can no longer take precedence over lives. We need to PROTECT PEOPLE FIRST.

If the laws say we can’t slow cars down, even when the risk has been obvious to neighbors for decades, then the LAWS MUST CHANGE.

Compare to West Roxbury, where, after an initial outcry over the death of a woman walking across Centre Street in 2019 led to demands to do something, the city wound up doing nothing after some residents became convinced the city's plans were a plot by outside agitators and Big Bicycle. Those residents continue to fight their alleged outsider foes.

If I wasn’t angry angry before …

… I’m angry angry angry now!
I just read about a librarian at the Springfield Public Library who was just killed by a motorist crossing the 30 mile an hour road in front of the library. In the 70’s there used to be a crosswalk in that spot but some town official removed it claiming it was better for pedestrians because drivers refused to stop there. Since then many people have been killed or injured there and many calls have been made to control the speeding and return the crosswalk.
The librarian was due to get married this weekend.

She was cited for failure to stop for a pedestrian in a crosswalk.

...she will have a GoFundMe to pay it

Is the investigation complete?

My question here is, if you're driving a car and hit somebody in a crosswalk, are you going to initially get cited for that no matter what the circumstances might be because that's how the investigation is structured?

I don't know, but I would assume that if there were aggravating factors like high speed, intoxication, blowing a red light, those would be charged as well. I could see that aside from intoxication those might not be clear until further investigation.

The negligent driver is no

The negligent driver is no doubt already back behind the wheel.

Why not, they were "fully cooperative"... /s

That stretch is awful

I've driven and ridden bikes on Washington St there and have routinely had people crawling up my rear end because they want to drive 45 mph or so. The road itself is a great connector from Brighton over to Brookline Village, but that doesn't mean that you have to be able to treat it like Storrow Drive or another major roadway.

It's certainly not like Storrow Drive. I don't know if "major roadway" is the best term, but... It's a through street, an artery - like Dorchester Avenue, Harvard St/Ave, Chestnut Hill Avenue, Western Avenue, River St, Hyde Park Avenue, Adams St, etc....

Is Washington Street really under State jurisdiction? I thought that was only numbered routes. And although Wash Street becomes Route 16 out in Newton/Wellesley, it's not here.

Not a state road

according to the MassDOT 2020 road inventory...

How about some details before

How about some details before we start picking up torches.

Right turning driver. Pedestrian with right of way in crosswalk.

What details are missing? Negligent driver should be off the road permanently.

of a scenario where a right turning driver hitting a pedestrian in a crosswalk (running parallel to the original road), in the middle of the day, is not at fault.

In addition to the details already provided, what more would you like to know before casting judgement?

No, you're totally right anon

We need to be asking the tough questions like:

"Was the pedestrian wearing their helmet?"
"Why were they walking in the first place, rather than driving?"
"Don't they know that cars are holy, blameless creatures?"
"How do we know they weren't jaywalking while buying drugs on their phone that uses lithium mined by exploited children?"
"Was the car OK?"

Please let me know if I missed any other important considerations. We really do need to be thorough here.

We need to do better. WTF.

In other Brookline news