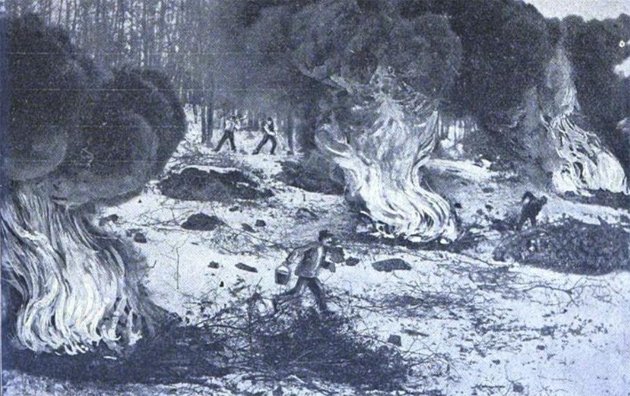 In the 1890s, Massachusetts residents fought the caterpillars in part by burning infested trees.

The Entomological Society of America has decided to rename the tree-munching menace formerly known as "gypsy moths" as "spongy moths."

The ESA Governing Board voted unanimously last week to approve the addition of "spongy moth" to ESA's Common Names of Insects and Related Organisms List, completing a process started in July 2021 when the previous name, "gypsy moth," was removed due to its use of a derogatory term for the Romani people. The change is the first undertaken by ESA's Better Common Names Project.

The name - derived from the common name used in France and French-speaking Canada, "spongieuse" - refers to the moth's sponge-like egg masses.

The caterpillars used to be content to just munch on tree leaves in Europe. But in the 1860s, Étienne Léopold Trouvelot, a Frenchman who had fled a coup in his home country and settled on Myrtle Street in Medford, imported several moth egg cases from Europe to see if he could somehow adapt the gossamer threads they created into a silk replacement.

He couldn't, some of the moths escaped and by the turn of the century they were well into their pattern of periodically erupting into giant armies of leaf-munching caterpillars across the eastern US, threatening trees everywhere.

Trouvelot, who had started out as an astronomer, lost his interest in bugs after failing to become a New World silk mogul, got back into astronomy and moved back to France. He has craters on the moon and on Mars named after him.

The people of Medford probably would have named something else for him, according to an 1898 state report that described a sort of Leinengen Versus the Ants saga, in which residents were saved only because the caterpillars preferred flora to fauna:

They tell of shrubbery and flowers ruined, of gardens despoiled of corn, small fruits and vegetables, of fruit, shade and forest trees stripped of their foliage and finally destroyed; of homes filthy with the pest; of trees, houses, fences and walks covered with the trooping battalions of caterpillars; of the stench arising from the crowing masses; of the crawling of the disgusting creatures into their houses, where they swarmed on house plants, crept into closets, upon the persons of the inmates and even into the beds; of the people's unavailing efforts to check the march of the ravening host with fire, hot water and coal oil, in spite of which the pest grew worse year by year, until an appeal was made to the town authorities.

Can we also rename all those toxic "I'm a free spirit" boomers on FB who have adopted that particular slur as their "name".

Come spongy, give me your

Come spongy, give me your tears.

I wonder if Sondheim would object?

I don't see how

Considering that both Rose Hovac (AKA Gypsy Rose Lee) and Sondheim are now former tenants of Planet Earth.

derived from the common name

derived from the common name used in France and French-speaking Canada, "spongieuse"

Monarch Butterfly is next

Acting all high and mighty.

And Spongebob may have a problem with the new name.

Love to see it

… people who confuse “etymology” and “entomology” bug me in ways I can’t quite put into words.

(Sadly not my original)

Sponges, moss, and weeds. They live on the trees out on Brookline Avenue.

...they're never the same

We fought them with fire too

I remember an outbreak when I was a kid. My dad cut down a branch that was loaded with the caterpillars and doused them with gas and lit them up. Good times (for me, not so much for the bugs.)

In other Medford news

You can laugh or you can cry: MBTA announces new delay in opening of Green Line Extension, and says the one stop it has opened will be shut for a month
Woman who jumped from bridge after escape from flaming Orange Line car: 'I'm safer in the water'
MBTA: Metal strip on 42-year-old train car came loose, into contact with third rail
Explosions, fire on an Orange Line train on bridge over Mystic River; passengers kick out windows to escape
Remember the Big Dig?
Tufts continues to require masks indoors as undergraduate Covid-19 rate swells