Mucka Finyardi looked across the water and Christopher Columbus Park at Long Wharf the other night.

Fireworks over the harbor

The North End/Waterfront Mothers Association says fight-happy homeless people in Christopher Columbus Park are becoming a menace to their children and that one answer is a six-foot-tall fence around the park's playground - locked every night from May through November.

In an e-mail to members, organizers say they reached their breaking point last month after a fatally injured man was pulled out of the harbor near the park, possibly as the result of a fight in the park.

Man pulled out of harbor off Christopher Columbus Park, dies; might have been pushed in during a fight

A good Samaritan jumped into Boston Harbor near Long Wharf shortly after 11 this morning and helped keep somebody foundering in the water afloat until a State Police boat arrived and troopers pulled both out. Boston EMS treated the man at the scene and then transported him to Mass. General for further care, Boston Fire spokesman Steve MacDonald says.

The Herald reports he died not long after his arrival at the hospital and that police are investigating.

Darryl Houston captured the daylight-powerful lights on Fairmount Hill in Hyde Park - put up by a guy who rents an aerial lift to ensure no surface is unilluminated.

The barrage of news about bodily fluids continues, this time via a report on NorthEndWaterfront.com about an incident this past Friday at the playground at Christopher Columbus Park, two hours after a father called 911 to report homeless men sleeping in the playground equipment and blood everywhere:

The annual blessing of the fishing waters at Christopher Columbus Park

NorthendWaterfront.com provides the video of the start of the Fisherman's Feast. Although there aren't any fishing boats there anymore, there used to be.

Citizen complaint of the day: Apparently, the city's yet to start enforcing its ban on Segways in parks

Yes, somebody did fall off a Segway in Christopher Columbus Park

Boston Fire and Boston EMS both confirm this account that a woman sustained serious enough injuries falling off a Segway Sunday evening that she needed transportation to a local hospital:

The formerly healthy rider was just taken away on a stretcher, on a backboard, in a neckbrace, bleeding.

Spokespeople for both departments, however, did not have additional information on what might have caused the fall, around 6:20 p.m. by Joe's American Bar.

Fun for the whole family: Let's pretend Boston gets hit by a Katrina-like storm

Sure, you could just stage a boring rally to call for action on climate change. Or you could hold a Boston Under Water Climate Festival, featuring such fun events as

He must be so proud 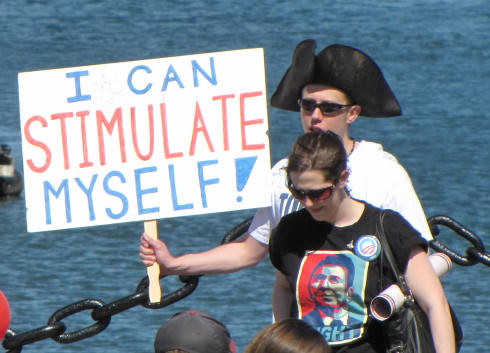 Libertarians, anti-income-taxers, Barney Frank haters, birthers, objectivists, Reagan lovers, Sarah Palin fans, Oath Keepers and gun owners descended on Christopher Columbus Park this Independence Day to vow to retake America from the the jack-booted heel of socialized medicine and pollution caps, or something, in yet another Tea Bagging.

Most of the 300 or 400 protesters were from out of state, but at-large City Council candidates Sean Ryan and Doug Bennett also attended. Bennett, in fact, was the first speaker of the day, moving further away from his Republican roots by complaining about tax-and-spend "Republicrats" who are putting us deeper into a depression. I ran into him before the speechifying; he said that while he might not agree with everything the protesters said, he did agree the income tax was unconstitutional, because the founding fathers didn't include it in the Constitution.

At least the city didn't flush any of its own money down the toilet. Petercip managed to avoid getting feathers in his lens at today's waterfront pillow fight.

Steve also posted a video, which sums it all up:

The Christopher Columbus statue gets a temporary head

Presumably, however, Matt eventually got tired and stopped posing behind the headless statue.