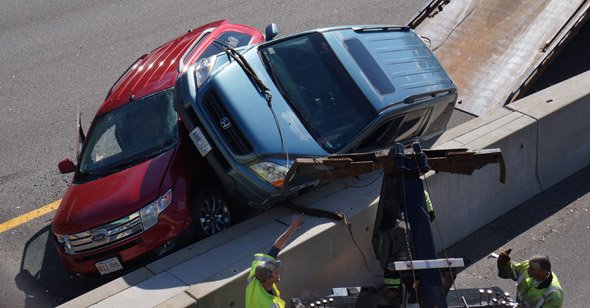 A minivan and an SUV heading north on 128 south collided around 3:45 p.m., bringing three ambulances as well as police, firefighters and tow trucks and jamming traffic in both directions.

The two vehicles wound up on what passes for a median strip there. Above, people crowded the overpass to take photos.

Ponkapoag was the sound that all made.

Heading north on 128 south? I hate that patch of roadways and their stupid highway signs. Hope everyone made it out alive.

Don't hate the signs, hate the people who continue to call that portion 128. It's not. 128 officially ends at the 95/93 interchange, and is signed as such. The road east of there is officially 93 north and 1 north, and is signed as such. And at the Ponkapoag exit, the road is traveling pretty much due east/west, so no one was heading north anyway.

Adam was just looking for an excuse to poke fun at 128.

Not sure the current system is much better

The reason I got the photo is because we got stuck in the resulting traffic jam while heading north on 93 south.

Maybe they should consider using "Clockwise" and "Counterclockwise" for directions on roads like 128 and 495 [Ducks, flees room].

I personally am a fan of the

I personally am a fan of the usual standard for beltways - "Inner" and "Outer". Unfortunately those tend to confuse people so they don't get used much, and aren't perfect for up here since we don't have a full loop anyway.

What we have is far from perfect, but it is technically correct - nowhere are you going "south" and "north" at the same time on the same road, except for the short stretch between US 1 in Dedham, and I-93 in Canton, which is actually signed pretty well now that they've pretty much completed the sign upgrades.

You wouldn't have been stuck

You wouldn't have been stuck in the traffic jam if you had been riding a bike.

Or if you'd taken

Or if you'd taken Chickatawbut Road. Or sat on the couch at home. Or moved to Cleveland last week.

A quick history lesson for the youngsters:

Originally, I-95 was to have run directly through downtown Boston. Thanks to citizen opposition, then Governor Francis Sargent cancelled all plans for construction of any new highways within Route 128 in the early 1970's. This included I-95, which would have been routed along the Southwest Corridor, across the Tobin Bridge, and then eventually through Rumney Marsh and Lynnwoods, before continuing along what we now know as the "Upper End" of I-95.

Rather than leave a gap in the primary Interstate highway running from Florida to Maine, officials chose to make-believe that Route 128 was somehow this unbuilt Interstate 95. Attempts to re-sign it as such have failed to change the road's identity for most Massachusetts residents.

Route 128 has a very long and; at times; proud history. It defines a regional corridor known for technology and (for better or worse) an era of suburban development. It's the de facto boundary separating the Boston urban core from the rest of the state; a boundary so significant that Route 128 itself was used in the governor's decree to limit construction of new roads.

It may have been more successful if they re-signed the Southeast Expressway, Central Artery, and Northern Expressway as I-95; instead of signing those roads as I-93. That arrangement would also have fit better into the Interstate numbering plan, where higher numbered routes lie to the east (and north) of lower numbered routes. There still would be a short multiplexed overlap with Route 128, resulting in a similar "north and south at the same time" novelty, but it wouldn't be so confusing because no Interstate routes would begin or end at the multiplex.

Of course, the pretense of signing Route 128 as Interstate 95 is intended to serve long distance travelers, as a routing to avoid downtown Boston. (Though, the same effect could be accomplished by calling it I-895.) At this point however, the highway should be designated so that all drivers can navigate to their destination as safely as possible. Multiplex it with I-95 if they must, but accompanied by shields and signage of equal size and prominence, marking the road as Route 128.

At the end of the day, Massachusetts drivers know Route 128 as the circumferential highway that runs from Braintree to Gloucester. If you ask someone: "Where's I-95?", you need to specify if you're referring to the afore mentioned "Upper End" that goes to New Hampshire, or else the other "Lower End" of I-95 that goes to Providence.

blame it on people who are too stuck in their ways to acknowledge that the highway between Braintree and Canton had the 128 designation decommissioned in 1989, largely to address the "I-93 north is 128 south" complaints.

And while the highway between Canton and Peabody retains the 128 designation, it is principally designated part of I-95 - as evidenced by ALL the big green signs, the exit numbers, and the mile-posting.

The plain reality is that the dual posting of 128 with I-95 is now a needless and pointless redundancy that only exists to this day because certain people (such as the Boston Globe staffers and the local traffic reporters) have a "that's the way it's always been and we won't let you change it" mentality.

Ask yourselves this. When you pay your phone bill, do you make the payment (in whatever format) to New England Telephone? When you go to the supermarket, do you say "I'm going to the First National?" I seriously doubt it.

Yet we continue to persist in using an outdated and pointless route designation for what is recognized by the Federal Government and others as part of the Interstate Highway network, and has been for almost forty years. Every other state in the country manages to accept route numbering changes to their Federal and Interstate roads. There is no legitimate reason for us to be so contrary in this matter.

It Keeps Massachusetts Quaint, Not Unlike Its Regional Accent

It's still just as confusing

You come to the north end of Route 24, and you want to go to Dedham, which is north of where you are, but you have to go "south" on I-93, or you'll end up in Braintree instead. That's ridiculous. The signs should read 128 north and 128 south, and to hell with I-93.

Oh, and whose bright idea was it to re-route Route 1?

Idiots, one and all.

With respect, if you are smart enough

to recognize that Dedham is on I-95 north, then you shouldn't have any problem with the current signs at the end of 24, which read "93 SOUTH TO 95."

As for the re-routing of US 1, blame the MDC (now DCR), who were convinced that removing US 1 from Storrow Drive and their other "recreational parkways" would magically make the overheight truck problem go away. And they got MassDPW to pay for the new signs as part of the bargain.

One other historical note

for the kiddies: Before he became Governor, Francis Sargent was Commissioner of the Massachusetts Department of Public Works (predecessor to today's MassDOT Highway Division). As MassDPW Commissioner, Sargent oversaw the design, and construction of certain portions [email protected], the highway network that he would eventually cancel due to political pressure once he became Governor. Classic example of flip-flopping that Boston drivers have paid for ever since.

@What are now the upper and lower decks of I-93 were originally constructed as part of what was supposed to be the I-695 "inner belt" highway. Running through Boston and Cambridge, the "inner belt" was supposed to connect all the other proposed highways together in a loop pattern. And, until recently, much of the embankment across Rumney Marsh for I-95 was still in place - although most of the top of it had imploded due to poor drainage design.

Classic example of the needs of local residents being prioritized over suburban commuters, that Boston and Cambridge residents have benefited from ever since.

What are now the upper and lower decks of I-93 were originally constructed as part of what was supposed to be the I-695 "inner belt" highway.

Actually, the "Upper and Lower Decks" were always intended as the route for the Northern Expressway, later renamed as I-93. Its first use, however, was to access the Tobin Bridge and Leverett Connector. The dual-level design allowed for simple "New England T" style interchanges, with directly connected ramps instead of the multiple loops we have today. This picture shows the view looking north across the Charles, with the ramps to and from the Leverett Connector going off to the left:

A little bit further to the north was the interchange for the Inner Belt. It too, was a simple "New England T" with similarly configured ramps from the upper and lower decks connecting to the west. Of course, the Northern Expressway was eventually constructed, and Inner Belt wasn't; yet, the interchange ramp-stubs remained in place unused for many years. In the view below from 1995, you can clearly see the unused ramps where the Inner Belt would have connected with I-93:

Eventually however, two of the unused stub-ramps were repurposed as ramps connecting to and from a new Leverett Connector bridge. The picture below shows how it looks today, with the Leverett ramps curving around on the left, with the vestigial ghost-ramp once destined for the Inner Belt, still ending in midair:

You are basically correct.

However, I-93 (The Northern Expressway) was supposed to end where it joined the I-695 Inner Belt at the Somerville/Boston line (where the current stubs are). It only became the upper and lower decks of I-93 when construction of the rest of the Inner Belt was cancelled.

on the section of I-93 between Canton and Braintree. They were all removed shortly after that portion of highway had the 128 designation officially decommissioned in 1989.

Could have been avoided if

Could have been avoided if they were just riding bikes

It's illegal to ride bikes on

It's illegal to ride bikes on the highway. Stick to public transportation and leave cycling to those of us who know what we're doing, thanks!

In order to head north on 128 south there, you have to be traveling east on 93 north.

The Rite of Spring

The mounting of two suburban kid-movers.

When soccer moms collide! Bet one was speeding to Cosco's, the other, to BJ's.

Moms are busy taking care of

Moms are busy taking care of their families while your lazy ass is busy making snide remarks.

Who else are going to watch

Who else are going to watch soap operas and name children Brayden?

...was probably raised by one of these "soccer moms" you despise so, or some other equally contemptible form of woman. Which is to say, for misogynistic asshats like you, all women.

Saturday, dude. Could very easily be soccer dads expressing their emasculated rage, if you want to get all pseudofreudian stereotypical and essentialist about it.

'Mommy, what are those cars

'Mommy, what are those cars doing?'

'Well, Jenny, when two hatchbacks love each other very much.....'

I can't tell which one won.

Did one out stubborn the other in a lane change to get this to happen? WTF?

In other Milton news