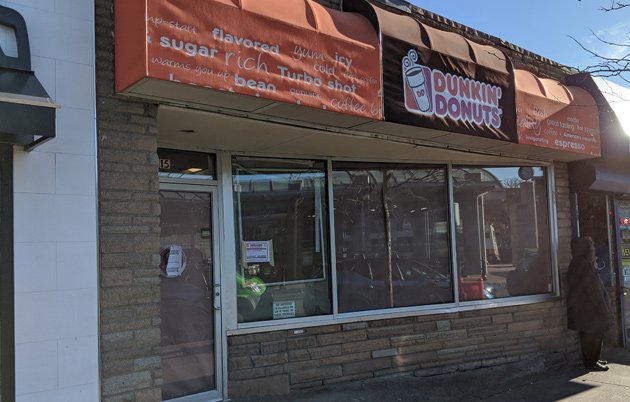 Just three days after ISD shut the Dunkin' Donuts in Maverick Square for health violations, the chain has sued its owner to take away its franchise.

In a federal lawsuit filed yesterday, Dunkin' Donuts alleges the health issues, found in an inspection after somebody posted a Facebook video of scurrying mice inside the outlet, violate its franchise agreement, which requires clean shops. The suit asks a judge to order the D’Alelio Management Co., operating as RMG Donuts, to remove any evidence the store in Maverick Square has anything to do with the chain. D'Alelio currently operates 18 Dunkin' Donuts franchises in the Boston area, including the Maverick Square outlet and two others in East Boston.

In its complaint, the chain says that as news spread of the violations, it sent a courier on Wednesday, Nov. 20, to hand deliver a demand to RMG Donuts that it clean everything up - or in legalese, to "cure the defaults" - within 24 hours.

On November 21, 2019, Defandants' shop was inspected and once again found to be in default of Dunkin's Standards and not to have cured the defaults identified in the November 20th Notice of Default/Notice to Cure.

The chain then sent RMG a franchise termination notice, to stop operating the outlet as a Dunkin' Donuts immediately. But, the suit alleges, the operator has "continued to operate the shop using the Dunkin' system and Dunkin's Marks without having any right or license to do so."

The outlet was closed this afternoon, its windows papered over and a sign apologizing for the inconvenience and directing customer to another Dunkin' Donuts, as a crew from a commercial cleaning company pulled up and went inside.

In addition to asking a judge to get RMG to immediately strip the outlet of all evidence it was once a Dunkin' Donuts, to help stop the "irreparable damage" its continued existence is causing the corporation, Dunkin' Donuts is asking for unspecified damages, costs and attorney's fees. Also, the corporation wants the judge to order RMG to be quick about signing over its lease on the property to Dunkin' Donuts should the chain find another franchisee willing to take over the shop.

RMG has yet to respond to the suit.

Donuts were fried not steamed? :)

the coffee is steamed.

They are focusing on coffee now since it is healthier.....somehow.....or something....

You call that coffee? Well, I guess compared to Starbucks you could call it coffee...

Y'all think those donuts are made? The come frozen as some kind of air ring then thawed and dipped in a plastic bag icing. The 'specialty"coffees are dispensed from a powdered mix much like a gas station capaccino. They shouldn't even be considered food service

Really?? I need to find a new

Really?? I need to find a new job then because my location has been making me prepare the donuts from scratch and using an espresso maker!! Which location are you at??

I say 'suspicious' other than 'wrong' because who am I to judge. I'm in the extreme minority (New Englander who doesn't go to Duncan's Donuts):


my location has been making me prepare the donuts from scratch

Oh come on now. It's already a stretch if they're stirred up from a mix and baked on location instead of being trucked in. But from SCRATCH?


prepare the donuts from scratch and using an espresso maker

Ah, well there's your problem right there. You're trying to make donuts with an espresso maker! Espresso makers are to make coffee, silly. I guess that explains why Duncan's coffee is no good, maybe they're trying to brew it in a microwave or something.

There is a giant hole about

There is a giant hole about 16 feet deep for a large building project at nearby 9 chelsea Street it has been there for many months , people may be frustrated about Dunkins being unsanitary but the franchisee can probably sue owners of 9 chelsea Street for leaving a giant rodent hole for a lengthy period of time. The giant hole can cause rats and mice scurrying around to seek shelter especially in colder months at nearby buildings around Maverick sq.

If DD is concerned about health..

.. they need to take another look at the junk food they peddle.

you could just choose to go elsewhere?

There was an older type donut

There was an older type donut shop in Central square, across from Hot Gus's hangout. is it still there?

Both places have a Central Square, but this thread is about East Boston

Hot Gus is an East Boston

Parking was terrible at this location anyway. Going elsewhere to a location with a dedicated lot and/or drive thru like the one on Bennington would be way better.

Likely gets lots of business from people going to and from the Blue Line and the many connecting buses. I hope DD can find a better franchisee to take over and reopen this location.

I walk by it daily. I just know how much Lee loves cars :)

If there is no demand for

If there is no demand for these products DD will be out of business in 2 days. It is called Capitalism: give the people what they desire. Of course it does not mean it is good or healthy.

So Dunks has to sue the franchise

in order to close the store? Who on Dunk's legal team wrote that contract?

Any contract has to be

Any contract has to be litigated in order to be enforced if one of the parties refuses to abide by its terms. So if the franchisee is not willing to just go away, they must be sued in court by the franchisor to enforce the contract's terms. It has nothing to do with the terms themselves.

all jimmies are chocolate.

It's not the best of nights; dead train at Orient Heights
East Boston billiards hall was ordered shut because of neighbor, police complaints; can re-open tonight but has to prove it's doing something about its issues
Board approves East Boston cannabis shop - but without a drive-thru window
Remains of a POW who died in a North Korean camp confirmed as those of an East Boston man
One-man crime spree from East Boston gets almost eight years in federal pen
East Boston restaurant warned to do a better job keeping beer-chugging customers off its patio