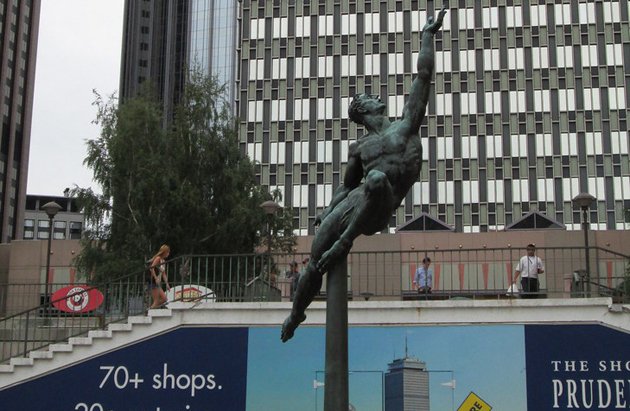 Good news for folks with some Quest love. Photo by Alexandra Molnar.

First a tot lot on Beacon Hill got a bronze statue of a turtle (since moved into the shade so it no longer burns little kids). Now Smith Playground in Allston will be getting the 27-foot-tall "Quest Eternal" statue of a naked man reaching for the stars, or perhaps a towel, that was posed in front of the Boylston Street side of the Prudential Center until 2014.

The Boston Arts Commission reports it's accepted the statue as a gift from Pru owners Boston Properties and will install it at Smith Playground, 235 Western Ave.

Donald DeLue's statue stood with an eternally pained face outside the Pru for 47 years, until the Pru's owners put it in storage so they could expand the mall's space.

This is not the first time a local statue has shifted around the city.

The starving-horses statue that now sits at Congress and D streets in the Seaport was originally placed on the Common.

The large lollipops mobile that once moved in the wind outside 100 Summer St., near South Station, now sits on Ruggles Street, near Shawmut Avenue, in Roxbury.

A statue of Robert Burns (and his dog, Luath), was uprooted from the Back Bay Fens in 1975 and stuck incongruously in Winthrop Square downtown. With much of the square being replaced by a skyscraper, it's now slated to return to the Fens.

Photo originally posted by the Massachusetts Office of Travel and Tourism. Posted under this Creative Commons license.

I always loved this sculpture when it was downtown and vividly recall when they removed it. At the time, it's future was unclear. So happy to hear that it found a home, even if it's off the beaten track. I'll make a point to stop by on a windy day.

I’m surprised that TB12 & Tom Brady didn’t invite this bronzed Adonis to stay as he seems to be quite pliable.

Another statue-shuffle to add to the list - John Winthrop's removal from Scollay Square in 1904, eventually resting at First Church on Marlborough St.

I remember when the Pru had a

I remember when the Pru had a moat.

Pics or it didn't happen.

Pics or it didn't happen.

Pepperidge Farm remembers, not a bit of 'Colonial Baloney'

A patch of green grass filled the space between the shopping pavilions on the south side and a skating rink filled that space in the winter. A shallow moat crossed by small bridges separated the tower from the arcades. Mr. Luckman called this approach “humanation.”

The reality of the finished project did not match his Utopian plan, however. The tower captured the north wind Bostonians call the Montreal Express and funneled it down into the shopping arcade. The water in the pool splashed up onto the promenades. Because the tower was built in the midst of the Atlantic Flyway, dead birds rained down on the plaza during migrations. (This happened to me when I was crossing the promenade with a date.) It was a joyless place reminiscent of an uninspired suburban shopping plaza but a lot colder.

Leif Erikson Was moved from Mass Ave to Charlesgate.

BPL has photos of the original location when it was at West Chester Park, the former name of Massachusetts Avenue

The "starving horses" statue - "The Partisans" - is now on D Street at the intersection of Congress Street. If the link below works, you can see it in the Google 2018 view as it was being installed there.

Boston Herald mention of the move in November 2018:
https://www.bostonherald.com/2018/11/20/polish-freedom-fighters-deserve-...

Thanks for the update

How about the Teddy Bear statue that that once stood outside the former FAO Shwarz toy store on Boylston St? After the store closed, the new corporate tenants got superstitious about the bear sitting on the corner, and ordered it to be removed. Now it sits on Washington St at Tufts Medical Center.

I remember when someone would put a condom on the statue's finger. It would be removed once in a while but ultimately another would replace the missing one. Olde Boston

This statue has moved again -- it is now on a traffic island elsewhere in the Seaport.

... this a paycheck!!!”
It’s what I always thought the Pru statue was saying when I passed by. The pay is probably even worse in Allston.

It could be worse. You could

It could be worse. You could have something that has offended some people from the start a century ago as well as being on its third home already. Something like The Triumph of Civic Virtue in NYC.

Get to? I haven't been down that way in a while.Did the city move it?

I had forgotten about that abomination. I hope they melted it the fuck down.

Still there, the last time I

Still there, the last time I looked driving by (pesky pedestrians wanting to cross the street, distracting me from looking at the statues....)

Mayor, federal prosecutor vow to bring charges against Nazis for attack on man in Copley Square - once they can ID them
Police try to ID Nazis for possible A&B charges in Copley Square
Nazi brownpants with riot shields parade through Boston after members pulled out of clown-car U-Haul in Idaho
Two Esplanade swans euthanized after falling ill with what appears to be avian flu
Trademark lawsuit over name of new Italian restaurant on Newbury Street gets ugly
Man tries to jump over Public Garden fence, doesn't quite make it, impales himself