Lightning the Burmese Python has been found and is back home with his family!

The bad news is an eight-foot python is slithering around Newton; the good news is he was recently fed

UPDATE, 8:30 p.m. Newton Police report the snake is still on the lam, and urge anybody who sees it to call them directly, NOT the city animal control officer.

Citizen complaint of the day: Snakes alive in Roxbury!

A worried resident files a 311 complaint about all the snakes on Lambert Street, near Highland Street: Read more.

Braintree becoming quite the snakebit town 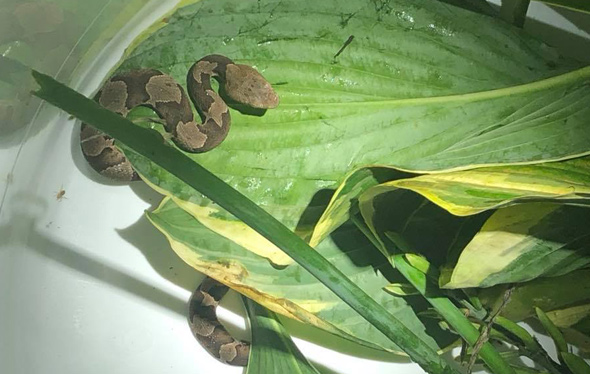 Braintree Police report a man coming out of one of the hotels on Wood Road - between the Blue Hills Reservation and the South Shore Plaza - was bitten by a copperhead snake Thursday evening. Read more. 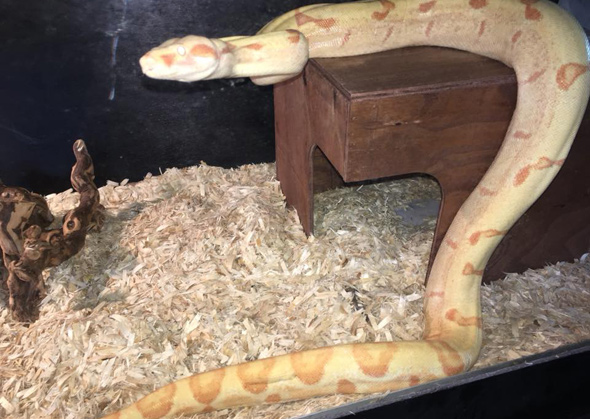 UPDATE: The snake has been found and is back home; Saugus is safe for teacup poodles again.

Brenda Sweetland reports her son's boa constrictor escaped somehow yesterday. It was last spotted by her mailman scrunched up next to a house on Richard Street near Dudley Street.

I need to get word to people who have small pets. Sorry for this inconvenience to anyone. Please let me know if you happen to see her.

You never know what'll slither into the Charles River when you're just standing there, where Sawmill Brook enters the river at Millennium Park, looking at the little fish swimming by the shore. It was like 18 to 24 inches long.

Snake's alive: Brookline seeks owner of snake found in playground; anybody check in on Penelope recently?

Brookline Police report a snake found at the Lawton Playground near Allston is now in the custody of town animal control, which assumes the serpent is somebody's pet.

Penelope, is that you?

Anne Keane posts a brief video of a snake on the train. Red Line, of course, because, really, what other line would a self-respecting snake take?

It's not just the MBTA that has trouble with wayward snakes

This is apparently an issue for Philadelphia as well:

In Brookline, police take a moment from turkey patrol to inquire about a large snake

Penelope, is that you?

We knew there were rattlesnakes in the Blue Hills; we didn't know they were five feet long

Police warn cold-blooded killer on the loose in Braintree 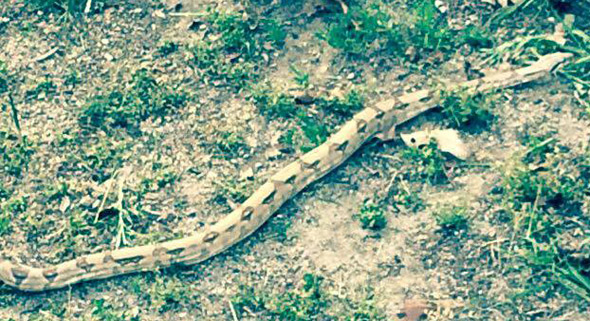 UPDATE: Teacup-poodle owners can relax: SNAKE HAS BEEN FOUND AND IN CUSTODY WITH ANIMAL CONTROL. AREA IS NOW SAFE

Braintree Police are warning owners of small pets in South Braintree to keep them inside until an escaped boa constrictor is recaptured. Read more.

Like Orange Line riders don't have enough to worry about: Woman takes the T to JP with a snake around her neck

It's not every day you see someone get on the T carrying a live 6-foot snake. So that happened.

She says the woman had the snake around her neck and that the pair got off at Green Street. She adds the snake:

Was a kind of light brown with black spots I think. I was trying not to stare!

Has Penelope moved to JP?

Python in the Public Garden. Photo by Stevil's wife.

Mike the Mad Biologist reports a guy is standing in the Public Garden this evening, trying to charge $5 to have your photo taken with his ten-foot long python yellow anaconda. Yes, it's alive. Somebody should alert the guy who owns Bobby the mini-pig - he might want to avoid the Public Garden for awhile.

EMTs responded shortly before midnight to Orton Marotta Way, where a 21-year-old man had been bitten in the right hand by a snake. EMTs, unfamiliar with snakes, were unable to identify the breed. The man complained of tingling in his hand but did not have any breathing problems, a spokesman for Boston EMS reports, adding he did not have any details on what the man was doing with the snake. Animal Control did remove the snake from the scene.

Snakes on a plain

What could top the mini-pig of Mission Hill?

Looks like Samuel L. Jackson needs to take a trip over to Dudley Square

Iseut videos the squirming snake mass in her yard.

Aw: Penelope the Red Line Snake can have play dates on Mission Hill

The Globe reports a Mission Hill resident found a boa constrictor in her backyard today.

OK, Steve Annear alerts us it's really a way to help a woman with multiple sclerosis pay for insurance coverage under COBRA.