Swissbakers, which closed all its Boston outlets last month, reports it re-opened its outlet on Western Avenue in Allston today: Read more.

Emerson College announced today that a bakery and a taqueria will be moving into space in its newly renovated Little Building at Boylston and Tremont streets, and that it is currently negotiating leases with an Asian noodle place and a juice bar for the building. Read more.

Susan Vittorini posted the sign this morning: After 50 years, Diane's on Poplar Street will be closing for good on June 8. Read more.

Baker Baker on Spring Street (at Baker) is closing for good at the end of the week. Owner Fran Kolenik says, though, she's looking at possible ways to keep making pies.

The news comes a couple weeks after the owner of the neighboring Kalembar Dune announced she's closing as well.

Sweet deal: Back Bay to get outlet of high-end local bakery chain

The Board of Appeal today approved plans by Tatte to open a bakery at 399 Boylston St., across from where the Rattlesnake used to be. Read more.

Michael Cucchiello reports his 70-year-old bakery, which sells everything from pastries to pan pizza at 356 Bennington St. in Day Square, is moving to Cogliano Plaza on Lincoln Avenue.

Cucchiello had to start looking for a new home earlier this year when his landlord told him the building would become a Dunkin' Donuts. 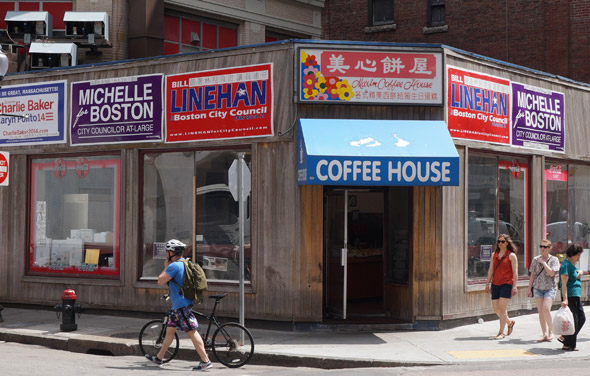 The wonderful Chinatown bakery at corner of Harrison and Beach St has closed. "Loss of Lease. Closed after 33 Years."

The news gets Lucy Fitzgerald's Rozzie up:

Fornax in Rozzie did it first. Best breakfast sammy in the area hands down. 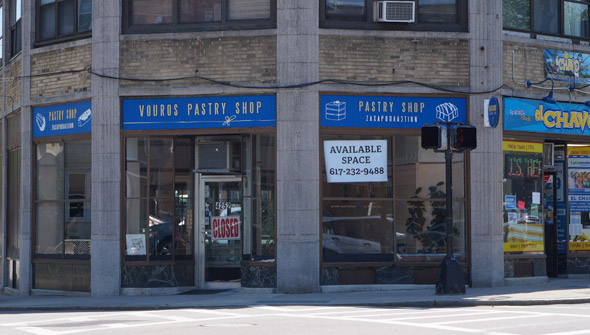 Vouros, the Greek bakery at Washington and Poplar streets, is empty and closed this week, a large "Available Space" banner in one window.

The closing, rumored for a couple months, leaves Roslindale Square with just two bakeries: Diane's on Poplar Street and Fornax on Corinth Street.

The way the cookie crumbles in the South End

BosGuy convened a taste panel to find the best chocolate-chip cookie in the South End. They found a clear favorite.

NorthEndWaterfront.com reports that Boschetto's on Salem Street is closing its retail shop after 110 years in business.

The Worcester Telegram picks up the cudgel of a Worcester County resident feeling put out by the way Mike's on Hanover Street doesn't display prices for any of its baked goods. Quotes both a state official who says that's just against the law, and a clearly annoyed Mike's manager, who says he had no idea that was a law and that this is the first time in 60 years anybody's ever complained.

The Zoning Board of Appeals yesterday approved a plan by South End Buttery on Shawmut Avenue to open a second outpost for takeout at 37 Clarendon St., near Appleton Street.

The Boston Licensing Board decides Thursday whether to grant a food-serving license to the new place. At a hearing this morning, representatives of the mayor's office and several city councilors spoke in support.

Bread & Lily lets customers know via a tweet that it has shut its doors for good:

Due to economic factors, Bread & Lily is no longer in business. Our location in Newton Highlands is avail for lease. Thx for your patronage.

The sign's still lit up, but the bakery itself is now dark.

Joe Murphy says he tried, he really did. He'd show up at the bakery he'd just bought on Washington Street every day at 2 a.m. despite the vertigo from an accident that so bad doctors had put him in a coma for nine weeks. When the economy went south and people stopped buying non-necessities like hand-made cakes, he made plans to add a cafe. When red tape at the city Inspectional Services Department delayed that for months, he still persevered.

But Murphy says, he finally just burned out - the 10- and 12-hour days seven days a week just weren't cutting it. Two days ago, he closed A. Boschetto, the Roslindale Square landmark that had been open since 1952.

The store's refrigerators are still filled with cakes, one display case is still loaded with pastries; bags of baked goods line a table. Murphy says he'll try to sell those off, along with all the baking equipment in the 4,000-square foot bakery, but then he's done.

Murphy, who grew up in West Roxbury, says he was working as a food broker when he came down with a virus in 2001 that left him, in his mid-50s, legally blind. Undeterred, he decided to go to culinary school to learn to be a chef - he'd always wanted to own a restaurant. But two of the chefs he worked with at the BU culinary program and at a program in New York convinced him not to go into the kitchen because he would be too hard on his health. Instead, he went into baking. When done, about 5 1/2 years ago, he bought A. Boschetto.

And then, while riding his motorcycle near the West Roxbury VA Hospital, was crushed in a bad accident. His doctors at Brigham and Women's put him in a special, secured room and induced a coma for nine weeks to let his body heal. The accident left him with vertigo, but he says he'd still make the trip to the bakery - even though that usually meant sitting in a corner, in an upper-body cast, as he supervised the baking.

Murphy said things seemed to be going OK until about a year ago, when business just dropped off. People were no longer willing to buy "artisanal" products, like his cakes and pastries. He said that despite all the delays from Inspectional Services, the cafe was beginning to take off - but just not fast enough to save the bakery.

Murphy doesn't know what he'll do next, but adds he's convinced that "when one door closes, another one opens."

Only in the North End, pizza and pastries edition

A Proper Bostonian provides two examples of why she loves the North End.

Making a bread run in Framingham

... I will admit that I am a French Bread snob. While Clear Flour in Brookline comes close to those of Paris, B and R's version is even better. The baguette has that incredible balance between a crisp crust and soft, airy and moist inside. It has just enough salt. But what sets it above the rest is its pure taste. ...

... It might have been my initial delirium, but the jam-filled sugar cookies now seem a bit bigger and appear to have even more filling. Set the treadmill at 11.